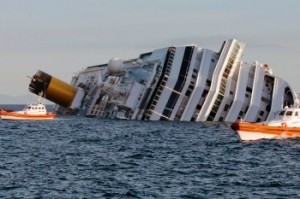 With 2 passengers still remaining missing on the partially sunken vessel, 5 bodies have been identified among the wreckage that were found a few weeks ago.

According to the Mayor’s office of the Italian city of Grosseto, the 2 Americans named were Gerald and Barbara Heil.  There were also 2 Germans that were identified, Christina and Norbert Ganz and an Italian crew member, Giuseppe Girolamo.

The Heils were never able to make it to safety and their bodies were found along with 28 others in previous days. The daughter of the American passengers spoke to a radio station, WBBM, saying that her parents were looking forward to traveling on their 16 day vacation in the Mediterranean.

But the son, John Heil, said the family was declining to say anything about the identification when contacted by phone by The Associated Press.

The elderly couple was from a picturesque area of Minnesota at White Bear Lake.

The 5 bodies that were identified were actually found on March 20th, but the Italian authorities had to spend a few weeks examining the bodies before they could make an exact determination on the identities.

It is now going on 3 months since the Costa Concordia struck a rock and began to sink, and recovery crews have been painstaking going through the wreckage looking for the missing.

The weather and sea conditions have made the search for the missing a challenge.  Divers have had to go through heroic maneuvers to find the missing so far, and recovery crews are determined to find the 2 remaining missing in the wreck, an Indian crew member and an Italian woman who are both presumed dead.

Francesco Schettino, the captain of the Concordia, remains under house arrest as he is under investigation for criminal charges of manslaughter.

J. Souza
Jon got hooked on cruising after his first cruise on his honeymoon, and today he is always looking for cruise deals and reading information about the cruise industry. Jon lives in the foothills of North Carolina and wishes there were a cruise port that far inland. Jon can be reached at [email protected]
Cruise News2 Americans Named Among Last 5 Bodies Identified on Costa Concordia
Previous article
Carnival Hires George Lopez Comedy Team on Cruise Ships for Fun 2.0
Next article
Norwegian Getaway Will Sail From Miami in 2014