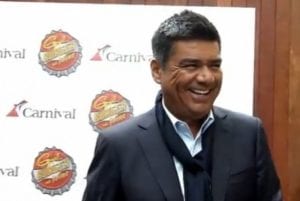 Carnival is rolling out a slew of new ideas for its cruise line in 2012, including the idea to hire George Lopez as the “director of comedy”.    Carnival senior vice president Mark Tamis stated that “We do comedy, but (we thought) how can we do comedy better,”.  The answer, apparently, was George Lopez.

Lopez will be seen on several in-cabin announcements and instructions on the televisions on Carnival ships as well, and the comedian stated that, “People will laugh like they have never laughed before.”

Cruisers will also hear the voice of the comedian as they are welcomed onto the ship with several light-hearted prerecorded audio messages and video recordings.

The comedy team from Carnival offers five 35-minute show on different nights during each cruise sailing, with at least two comedians performing each night.  Carnival says it hosts a greater audience at its comedy shows than any land-based comedy chain in the USA.

Already known as the “fun ships”, Carnival is calling this new slant on comedy part of its “fun 2.0” strategy going forward.

The Carnival Miracle will be debuting the first Punchliner Comedy Brunch by George Lopez which will feature 5-6 minute comedic gigs every hour while passengers enjoy a variety of cuisine at the same time.  Much of the menu was inspired by the comedy of George Lopez as well.  The Carnival Miracle will be sailing from New York all year long with 8 day sailings going to the Bahamas, Caribbean, and Florida.

Lopez mentioned that he has never actually been on a cruise before but he looks forward to going on his first to Mexico.  He also added, “I am told I will be allowed to come back.”

So what do you think about George Lopez taking over as the “curator of comedy” on Carnival ships?   Good for the cruise line?  Something other cruise lines can learn from?  Leave a comment below to let us know.

J. Souza
Jon got hooked on cruising after his first cruise on his honeymoon, and today he is always looking for cruise deals and reading information about the cruise industry. Jon lives in the foothills of North Carolina and wishes there were a cruise port that far inland. Jon can be reached at [email protected]
Cruise NewsCarnival Hires George Lopez Comedy Team on Cruise Ships for Fun 2.0
Previous article
Saga Sapphire Has Engine Problems on Inaugural Cruise
Next article
2 Americans Named Among Last 5 Bodies Identified on Costa Concordia