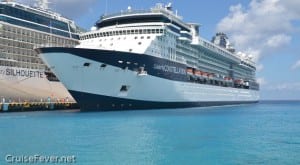 We just went on a 5 day cruise on the Celebrity Constellation which went out of Port Everglades in Fort Lauderdale, Florida and took us to Key West FL, and Cozumel, Mexico.   Let’s take a look at the ship and what cruisers can expect aboard this vessel.

The Celebrity Constellation is a 91,000 ton Millenium class ship that was completed in 2002.  But in April of 2013, the ship was “Solsticized” and give Solstice class upgrades for its new makeover.

The new Solstice class upgrades include AquaClass rooms and accommodations, a new computer lounge with Apple computers, wi-fi accessibility across the entire ship, new carpet and upholstery, and some other new amenities to give the ship a fresh new feel.

Many consider this ship’s size (965 feet in length and 105 feet across) to be a perfect size for a cruise ship.  It’s not too big to get lost and feel you are walking all the time, and not too small where you will feel cramped.  The 2,034 maximum guest capacity on 12 decks keeps this cozy ship feeling like a country club at sea.

Watch our video review and tour of the Celebrity Constellation if you’d rather just see the ship for yourself: 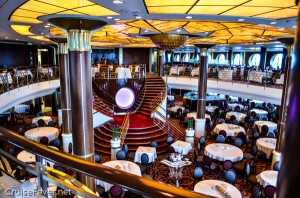 The Constellation has 2 specialty restaurants and one more casual restaurant that has a surcharge.  The most expensive dining choice is in Ocean Liners, which is a fancy European style restaurant with elegance and quality in mind.  Ocean Liners will set you back $45 but if you are really interested you can usually negotiate a little on price.  The Tuscan Grille is an Italian steak house that will cost $35.  I had a chance to try the food there one night and found the food and service very good.   You will be waited on like a king.   But if you just want a simple soup, salad, or sandwich you can check out Bistro on Five.  It will cost you $5 per person and you can try a number of crepes and Paninis in a more relaxed setting.

But the food is so good in the main dining room you may not even want to spend the extra money in specialty dining.  San Marco is the main dining room which makes up 2 floors in the aft of the ship.   The lower level is for fixed seating which can be set for 6pm or 8:30pm and the upper level is for select dining which is anywhere from 5:30pm to 9:30pm.  I chose the select dining and found it nice to eat with different people each night and also be able to eat at different times each day.  If you like the people you are sitting with you can always arrange to sit at the same table next time as well.

For AquaClass guests only there is the option to dine at Blu, which is a fine dining restaurant that offers more healthy choices that are all SPE certified.  AquaClass guests can eat here for both lunch and dinner.  Even if you don’t eat at Blu you should check out how lovely it is.   The décor is art in itself as you can see in our video on this ship.

Ocean Café is the name of the buffet aboard the Constellation.  While not a particularly large buffet I found there to be quiet enough variety for my tastes.  There was everything from an Asian station with sushi, curry, and stir fry  to an Italian section which allowed you to pick out your pasta, meats, vegetables, and sauce type, and have it made right in front of you fresh.   In the back of the buffet there was my favorite station where for dinner time I could choose from salmon, chicken, New York Strip, pork, or some other meats and the chef would cook it just how you like it.  Just a 7 minute wait was all it took.  The pizza from the pizzeria was also very good and served every day from noon until 11pm.

If you don’t feel like walking far from the pool for lunch you can always get a hamburger or vegeburger cooked just the way you like it for a 10 minute wait.  The Poolside Grille is right where it sounds like it would be.  Right next to the pool.

The icecream aboard the ship is made from scratch every day and offered for free every day from noon until 11pm.  There are some more exotic flavors offered along with the more traditional flavors.  If you want some gelato you will have to pay extra, however.  There is a café on deck 5 that sells gelato and you can get 2 for 1 during happy hour (4pm to 5pm).

By the way, the top Chef is a tall New York City guy with a great sense of humor.  We got a tour of the galley while on the ship and will post a video of that in the near future.

The Constellation offered 2 song and dance shows along with a magic show and a juggling act.  The first night’s entertainment showcased the talents of Scott Cavanaugh.  Scott has won 2 gold medals at the World Juggling Federation championship and I must say his show was the most entertaining of all of them.  He was funny, acrobatic, and of course he could juggle like no one else I have seen.  I’d love to see Scott’s act again.

The magic show was also very good and had some illusions that I’m still scratching my head over.   Illusionist Michael White paired up with a Mongolian contortionist named Hulan and the two went back and forth with dazzling acts.  The comedian on the ship, Lucas Bohn, did give us some good laughs, but much of his humor was either inappropriate or in bad taste and would have been much better suited for a late night show rather than the main one.

The two other nights showcased the dancers and singers on the ship.  The shows were iHollywood and Celebrate the World which involved everything from the Can-Can to Riverdance.

The Celebrity Theater offered very comfortable seating with plenty of legroom.  But if you were sitting in the balcony the reflection from the table lamps bounced off the glass railing and made it difficult to see the show.  So many people just covered the light when the show started.

My favorite part of the ship and probably the most relaxing area is the Solarium which has an indoor Thalassotherapy pool that is heated like a whirlpool, along with two hot tubs on each side.  The ocean water pool is supposed to be very healthy for your skin and has a spot on each side of the pool that allows you to recline in the water while bubbles gently soothe your body.  This is an adult only pool and is quiet from the other sounds of the ship with 4 fountains streaming into the pool to silence unwanted noise. 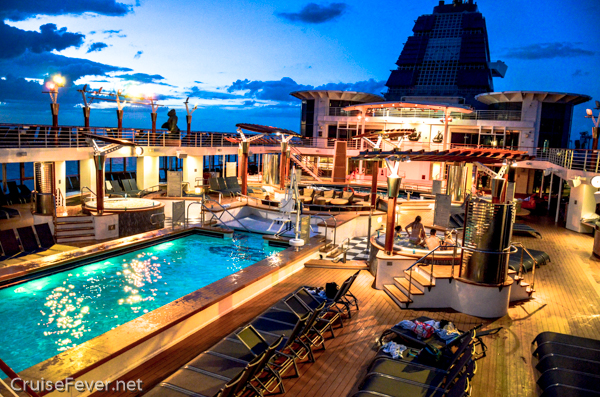 There are 2 other main pools midship on deck 10.  One is a 6 foot pool in which volleyball games are played.  With 4 more hot tubs on the main pool deck and lounge chairs in between the two pools, this can be a busy part of the ship on a sea day.

The spa area is smaller than the ones on some of the newer ships, but offers some very nice Turkish baths and steam rooms.  The Persian Garden, however, can only be used for an additional cost and even the steam rooms are not complimentary, just in case you are used to getting that for free on other ships.  Traditional spa services like massages and health and beauty services are offered.  You can see some of these areas in our video review of the Constellation.

The gym is right behind the spa and is a great location for getting good views as you work out.  There are free weights, treadmills, elipticals, and other work out equipment in this cozy area and even a spot for yoga.

This ship has one of the best basketball courts I’ve seen at sea, especially for a smaller ship under 100,000 tons.  This was one of the upgrades made during dry dock in 2013 as well.  The court is almost a full court and offers quality backboards and rims.  I even saw Captain Tasos (the youngest captain in Celebrity’s fleet right now) playing basketball at night with some of his crew.

There is also a ping pong table on the pool deck near the buffet and a shuffle board area one deck below the basketball courts.  But there were always lounge chairs on the shuffle board area and I never saw where you could get the equipment to play.

The jogging track around deck 11 gave ample room to run or walk, unlike some ships which have installed the jogging track as an after-thought and bring you too close to running into everything.

The arcade is near the Fun Factory for the kids and has about 8 or 9 arcade games which I only saw in use once.  But this cruise had an average age of about 40-50 so there weren’t a lot of younger children aboard.

There was some live music near the atrium of the ship too, but over all this area was not very lively.  Michael’s Club is a new addition to the Constellation and is a smaller lounge with liquor tastings and live entertainment.

The new iLounge offered Apple computers and large monitors for checking your email and getting online.  You can also buy any Apple products while aboard the Constellation.  The iLounge is right above the Libray on deck 8 Aft.

The Celebrity Constellation is a great little ship that is the perfect size for those who don’t care to be on the largest ship at sea and just want a relaxing vacation with excellent food and top notch service.  Some of the specialty dining people were a little pushy in trying to get us to sign up for a reservation, but that’s how they make their money.

Let us know if you have sailed on the Constellation and how you liked it so others can benefit from your advice or suggestions.

J. Souza
Jon got hooked on cruising after his first cruise on his honeymoon, and today he is always looking for cruise deals and reading information about the cruise industry. Jon lives in the foothills of North Carolina and wishes there were a cruise port that far inland. Jon can be reached at [email protected]
ShipsCelebrityCelebrity Constellation Cruise Ship Review and Video Tour
Previous article
Carnival, Royal Caribbean, and Norwegian: 3 Largest Cruise Lines in 2014
Next article
Cruise Passengers Sue Carnival For $5,000 a Year, For Life