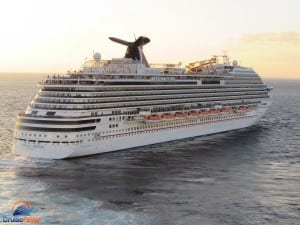 The three largest cruise lines in the world ranked by passenger capacity are Carnival Cruise Line, Royal Caribbean International, and Norwegian Cruise Line. Norwegian moved into the top three this year after the 4,000 passenger Norwegian Breakaway and Getaway were added to their fleet.

This data comes from the Cruise Industry News Annual Report and takes into account cruise ships that will be in service during 2014-2015.

Norwegian passenger capacity jumped 19% in 2014 and now stands at 1,722,400.  This number is based on double occupancy and does not include 3rd or 4th berths in cabins.

Rounding out the top 5 is Italian brand Costa Crociere.  The 3,700 passenger Costa Diadema is scheduled to be launched in October 2014 which moves Costa slightly ahead of MSC which is currently in 6th.

MSC had the 3rd highest passenger capacity in 2013 when the MSC Preziosa was added to the MSC Fleet.  However, MSC has not announced any future cruise ships, although there are many rumors of new ships coming in 2016.

New cruise ships that will make their debut in 2014 are Royal Caribbean’s Quantum of the Seas, Costa Diadema, Norwegian Getaway, and the Regal Princess.