The Transportation Security Administration (TSA) is sending out notifications due to a new policy that will start being enforced in January 2018. 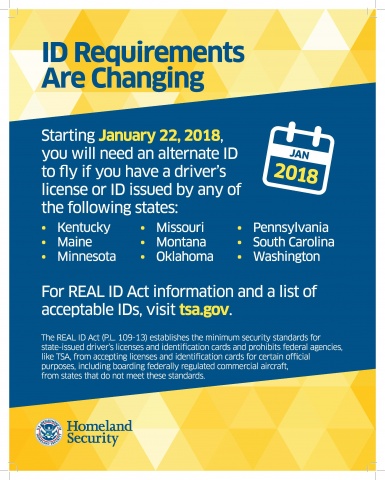 The TSA will start enforcing REAL ID requirements at airport security checkpoints, meaning that travelers seeking to use their state-issued driver’s license or identification card for boarding commercial aircraft may only use such documents if they are issued by a REAL ID compliant state or a non-compliant state with an extension.

Effective January 22, 2018, TSA will only accept state-issued driver’s licenses or identification cards if they are issued by a REAL ID compliant state or a non-compliant state with an extension.  As always, travelers may use alternate forms of identification such as a passport, military ID, or permanent resident card.

Currently, 41 states are compliant with the REAL ID requirements meaning that if you live in one of the nine states that aren’t, you will not be able to use your drivers license as ID when you fly.

If you live in the following nine states, you will need a passport, military ID, or a permanent resident card to fly on or after January 22, 2018:

TSA is currently running signage at airports warning travelers about this change in policy.

The REAL ID Act, passed by Congress in 2005, establishes the minimum security standards for state-issued driver’s licenses and identification cards and prohibits federal agencies, like TSA, from accepting licenses and identification cards for certain official purposes, including boarding federally regulated commercial aircraft, from states that do not meet these minimum standards and have not received an extension for compliance from DHS.

Ben Souza
Ben is a world traveler who has visited 40+ countries and taken over 70 cruises. His writings have appeared and been cited in various media outlets such as Yahoo News, MSN, NPR, Drudge Report, CNN, Fox, and ABC News. Ben currently resides in Cincinnati, Ohio. Follow Ben on Instagram. Visit Ben Souza on Linkedin. You may email Ben at [email protected]
Cruise NewsYou'll Need a Passport to Fly in 2018 If You Live in...
Previous article
Norwegian Adds Cruises to Cuba Through 2018
Next article
12 Reasons to Take a Cruise to Hawaii on Norwegian’s Pride of America