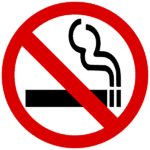 If you are cruising on NCL next year and like the idea of being able to light up in your cabin, you might want to think again.  Norwegian Cruise Line has followed several other cruise lines and will be making all cabins smoke free as of January 1, 2012.

AnneMarie Mathews, vice president of public relations, said “We’ve been looking at this for a while based on feedback from guests”.   It has been common complaint amoung passengers to complain about the smokey smells when a guests first enters the stateroom on embarkation day.

In January the new no smoking rules will go into effect.  Passengers in balcony cabins will be able to smoke on their balcony, but cigars and pipe smoking will not be allowed.  Smoking will be allowed in designated areas of the ship, including the casino.  NCL recently made bars, restaurants, and restrooms smoke free, along with areas such as the children’s pool and jogging track.

Traveling on Norwegian and want to light up in your cabin inspite of the news rules?  Be prepared to pay a $250 cleaning fee.

Norwegian is joining Princess, Celebrity, Disney, and Cunard (Queen Mary and Victoria) as cruise lines that are making cabins smoke free.  However, I assume it won’t be long before every cruise line adopts this

Ben Souza
Ben is a world traveler who has visited 40+ countries and taken over 70 cruises. His writings have appeared and been cited in various media outlets such as Yahoo News, MSN, NPR, Drudge Report, CNN, Fox, and ABC News. Ben currently resides in Cincinnati, Ohio. Follow Ben on Instagram. Visit Ben Souza on Linkedin. You may email Ben at [email protected]
Cruise NewsNorwegian Cruise Line Bans Smoking in Cabins
Previous article
How to Cruise for Free or Dirt Cheap with Enrichment Programs
Next article
How Much Money Should You Bring on Your Cruise?