Il Divo,  the world’s first and most successful classical crossover group with over 30 million albums sold, has announced a four day fan cruise to the Western Caribbean on Royal Caribbean’s Brilliance of the Seas. 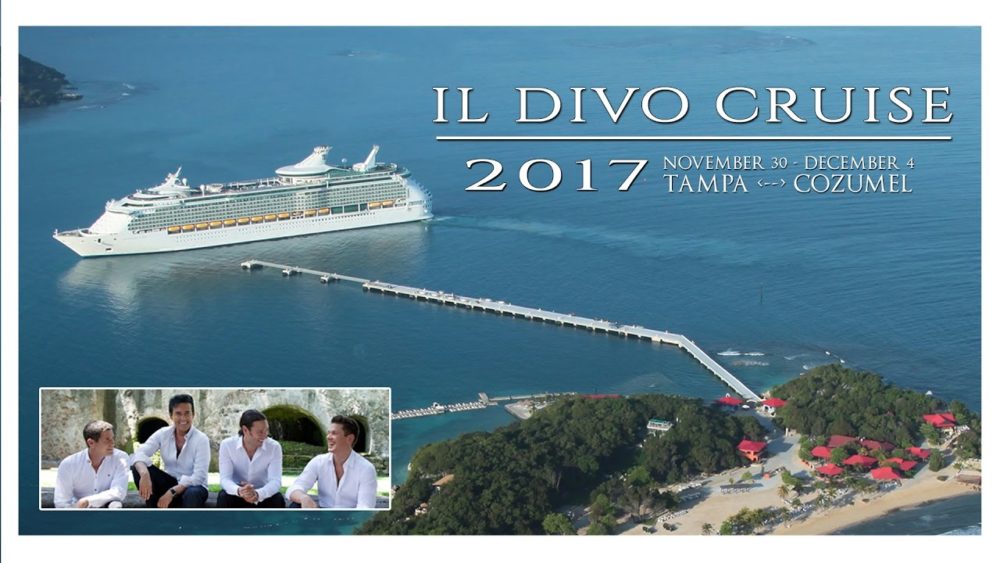 The romance of Il Divo will be brought to the seas with a special concert, solo performances, dancing, and theme parties. The four day cruise, to take place November 30 – December 4, 2017 will give guests the rare opportunity to interact with band members, Urs Bühler, Carlos Marin, Sébastien Izambard, and David Miller and experience a one-of-a-kind Il Divo concert aboard a luxurious Royal Caribbean cruise ship.

The international superstars, who most recently brought their AMOR & PASION tour to North America in support of their seventh studio album of the same name, will treat guests to a once in a lifetime experience. Activities will include an exclusive photo opportunity, Q&A session, theme parties, dancing and more. While traveling from Tampa to Cozumel, passengers will also have the chance to explore the ancient ruins and beautiful white sand beaches of Mexico.

Cabins are currently on sale for this special cruise with prices starting at $899 per person, based on double occupancy.

David Miller gave the following statement about this special fan cruise with Il Divo: “For us, it’s a way of sharing a unique experience with our audience.

For the first time we’ll be joining our fans on the cruise of a lifetime and we’ll be singing our most requested songs in the most luxurious of settings.” Adds Urs Bühler, “Guests will be treated to the ultimate Il Divo experience with special individual performances that can only be seen on this ship. We can’t wait for our fans to join us in the most romantic of settings in the Western Caribbean.”

For more information about this Il Divo cruise, visit https://ildivocruise.com.

Il Divo is the world’s first and most successful classical crossover group. The foursome have sold over 30 million albums worldwide, achieved over 50 number one records, received 160 gold and platinum sales awards in over 33 countries and staged four groundbreaking world tours. The international quartet comprises of tenor Urs Bühler of Switzerland, baritone Carlos Marin of Spain, pop artist Sébastien Izambard of France and tenor David Miller from the United States.