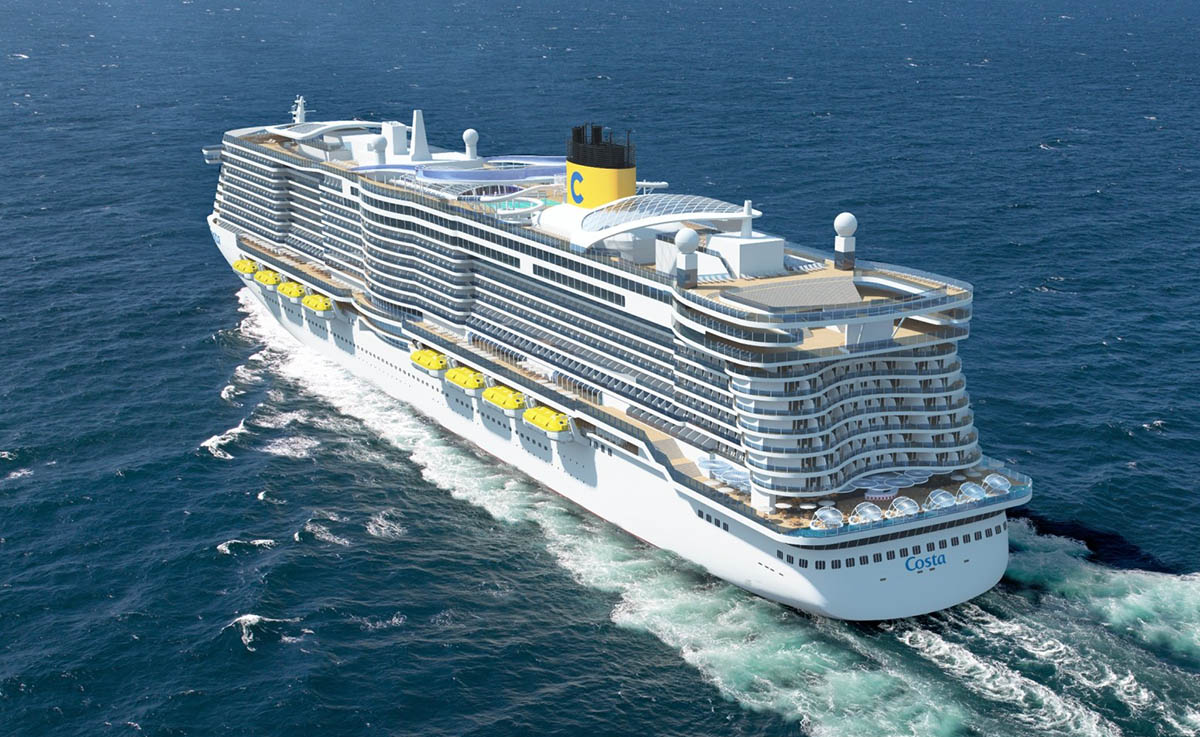 Costa Cruises, one of Carnival Corporation’s largest cruise brands, celebrated the traditional coin ceremony for its new ship, Costa Smeralda, at the Meyer shipyard in Turku, one of the biggest shipbuilding complexes in the world. With a gross tonnage of over 180,000 tons, Costa Smeralda will offer over 2,600 rooms and will enter service in October 2019. Delivery of a second vessel, the sister ship of Costa Smeralda, also built by Meyer-Turku, is expected in 2021.

Entering into service in 2019, Costa Smeralda will be the first cruise ship to be marketed broadly to consumers around the globe, particularly in Europe and Italy, that will be fully powered by liquefied natural gas (LNG), the world’s cleanest burning fossil fuel.

With dual-fuel engines, Costa Smeralda will be fully powered by LNG while in port and at sea – an environmental breakthrough that will improve air quality as LNG prevents emissions of particulate matter and sulfur oxides almost entirely at sea and in port. It also significantly reduces the emission of nitrogen oxides and CO2.

The Costa Smeralda represents further evidence of the pioneering and innovative spirit that characterizes the Costa Group, the market leader in Europe and Asia for cruising with AIDA Cruises, Costa Cruises and Costa Asia.

During the ceremony, some commemorative coins were positioned along the keel of the ship as a symbol of good fortune for members of the crew, passengers and future voyages. This symbolic moment, which is part of shipbuilding tradition, was celebrated with an event attended by the senior management of Costa Cruises and the Meyer Turku shipyard. Elisabetta Moraci, a 28-year-old Italian from Messina, Second Deck Officer in the Costa fleet, served as godmother of the event.

Costa Group, along with its sister brands within Carnival Corporation’s global portfolio, has been an industry leader in promoting and developing sustainable and environmental solutions. In addition to the use of LNG for cruise ships, Costa Group and Carnival Corporation’s global cruise brands have been industry leaders in pioneering the use of exhaust gas cleaning systems (EGCS) in the small confines of a cruise ship. Considered an environmental breakthrough, EGCS is installed on about 60 percent of ships in the Costa Group and Carnival Corporation fleet. The use of LNG and EGCS will both play an important role in further improving the impact of Costa Group’s marine operations.

In total, the Costa Group has 26 cruise ships in service, which equates to 74,000 beds. Seven new ships, will be coming into service between 2018 and 2023, including two for Costa Cruises, two for Costa Asia and three for AIDA Cruises, representing a total investment of over six billion euros. Once these seven new ships have entered service, the Costa Group’s capacity will have increased by over 50 percent to meet rising consumer demand for cruising over the next several years.

Costa Smeralda’s début is expected on October 20, 2019, with a 15-day maiden cruise from Hamburg to Savona. The itinerary includes two-day stopovers in some of the cities with the richest history and culture in Europe, including Hamburg, Rotterdam, Lisbon, Barcelona and Marseille.

The Costa Smeralda christening ceremony will be celebrated in grand style in Savona on November 3, 2019. The six-day inaugural cruise will depart from Savona on November 4, 2019, and sail to Barcelona, Marseilles and Civitavecchia (Rome). Costa Smeralda will then continue to sail around the Western Mediterranean until April 2020, offering one-week cruises including Savona, Marseille, Barcelona, Palma de Mallorca, Civitavecchia and La Spezia.

Ben Souza
Ben is a world traveler who has visited 40+ countries and taken over 70 cruises. His writings have appeared and been cited in various media outlets such as Yahoo News, MSN, NPR, Drudge Report, CNN, Fox, and ABC News. Ben currently resides in Cincinnati, Ohio. Follow Ben on Instagram. Visit Ben Souza on Linkedin. You may email Ben at [email protected]
Cruise NewsConstruction Begins on Another Carnival Cruise Ship
Previous article
Most Popular Cruise Destinations for Every Month of the Year
Next article
3 New Cruise Lines You Should Know About