Carnival Cruise Line has released details and a first look at their first mega cruise ship, Mardi Gras.  This 180,000 gross ton cruise ship will feature six distinct zones of guest pleasing experiences on the vessel’s 20 decks, including the first roller coaster on a cruise ship. 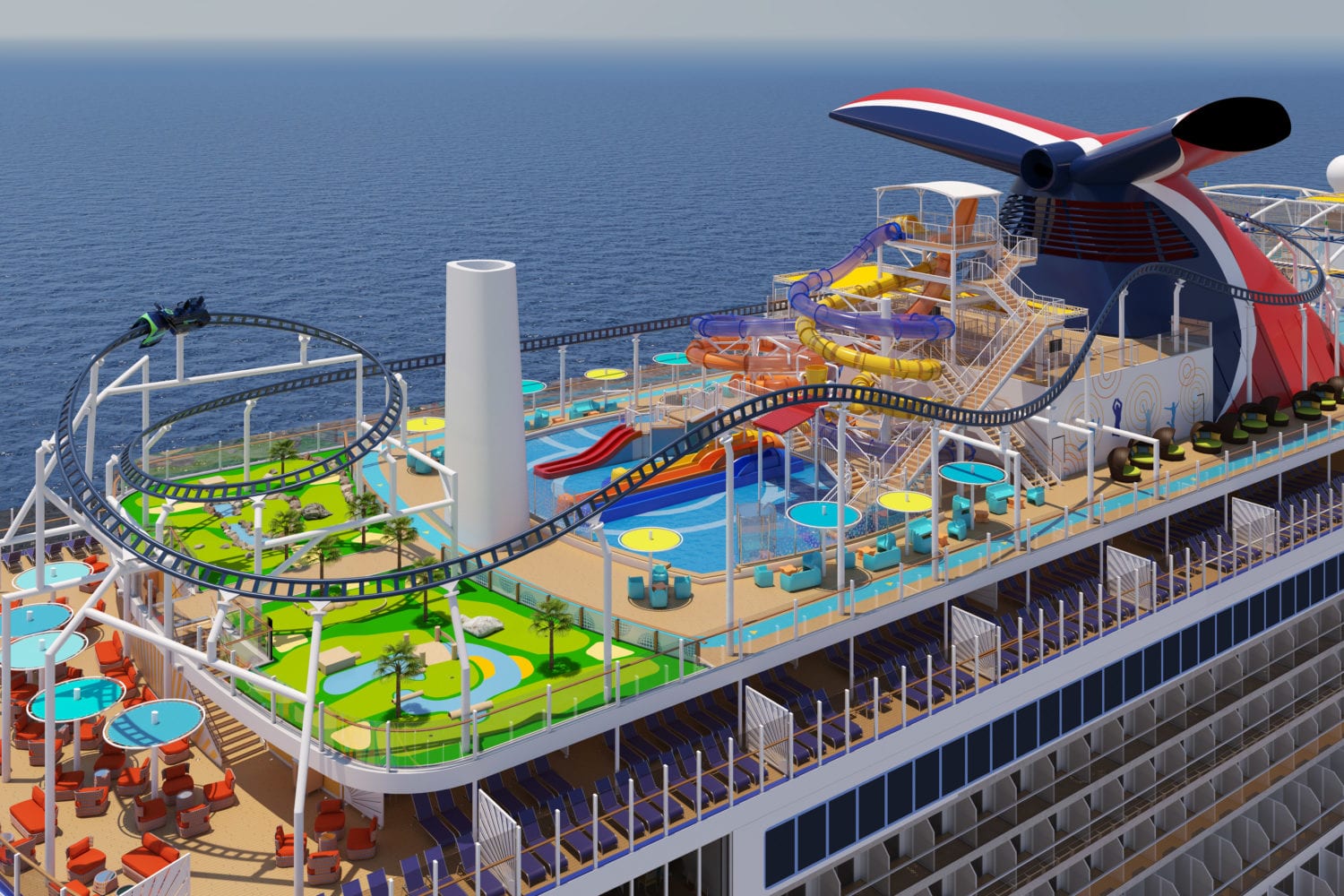 Cruises on Mardi Gras will open for bookings on January 30, 2019. The ship’s itineraries will also be announced on that day.  Mardi Gras will also incorporate all of the cruise line’s most popular signature features from its nearly completed $2 billion fleet enhancement program that has brought a consistent level of experiences to the more than five million passengers who annually sail on Carnival, such as Alchemy Bar, Fahrenheit 555 Steakhouse, and the Serenity adult-only retreat, among others – many of which will offer an exciting twist, along with a variety of new innovations exclusive to this vessel.

The cruise ship will be divided into the following six zones of fun:

Creating a sense of wonder the moment guests step on board, the transformative Grand Central takes the traditional atrium concept to new heights, combining a day-to-night entertainment complex with spectacular three-deck-high floor-to-ceiling windows and a bar overlooking the starboard side of the ship that will be the perfect venue for socializing and people watching amid sweeping ocean vistas. 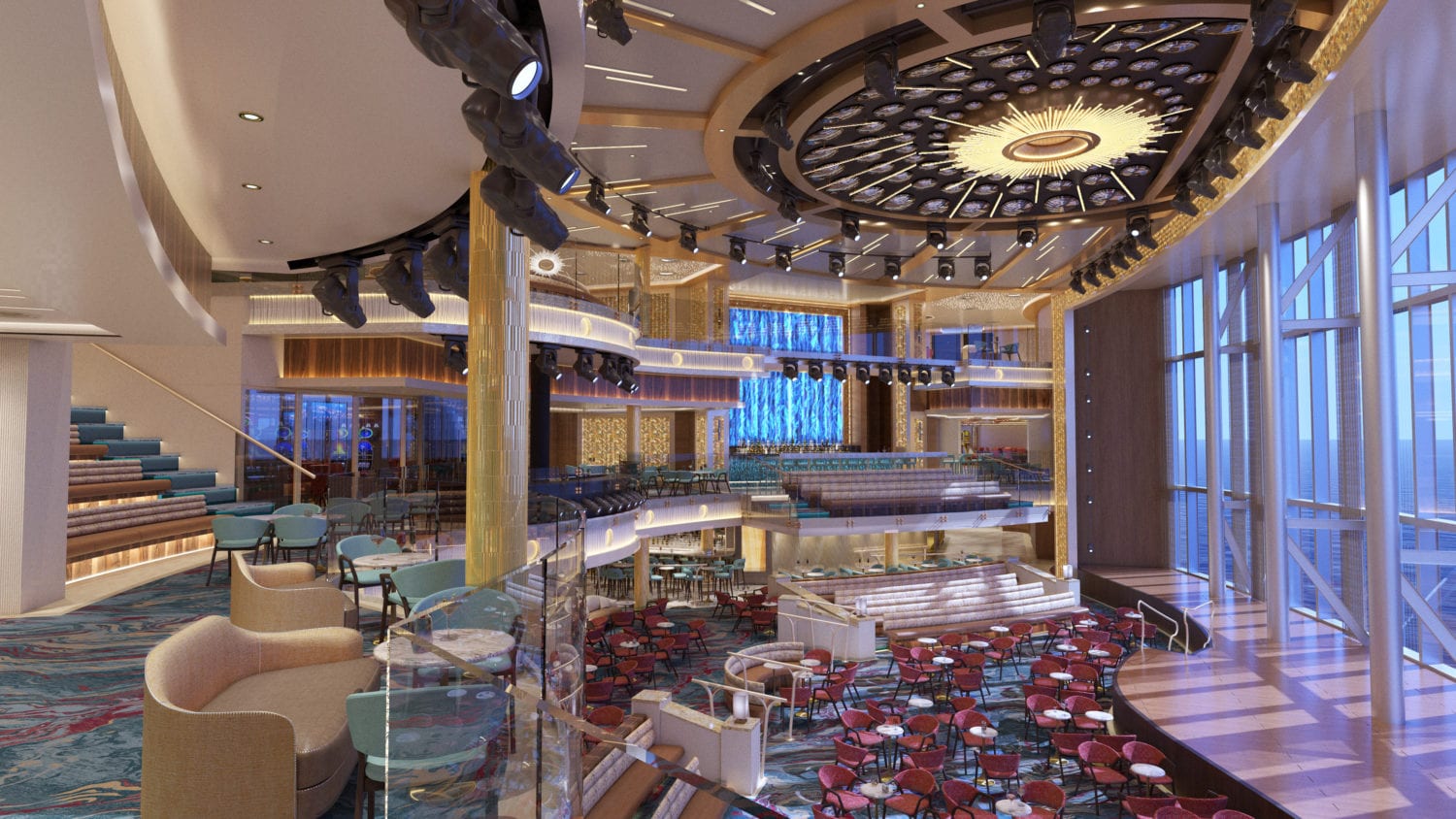 Steps away are Bonsai Sushi and Bonsai Teppanyaki which are being expanded from designs on existing ships to reflect their popularity with guests. There’s also the first-ever dedicated Punchliner Comedy Club where guests can enjoy nightly shows, and the always popular Piano Bar 88 for sing-a-longs that bring guests together in an intimate feel-good setting. 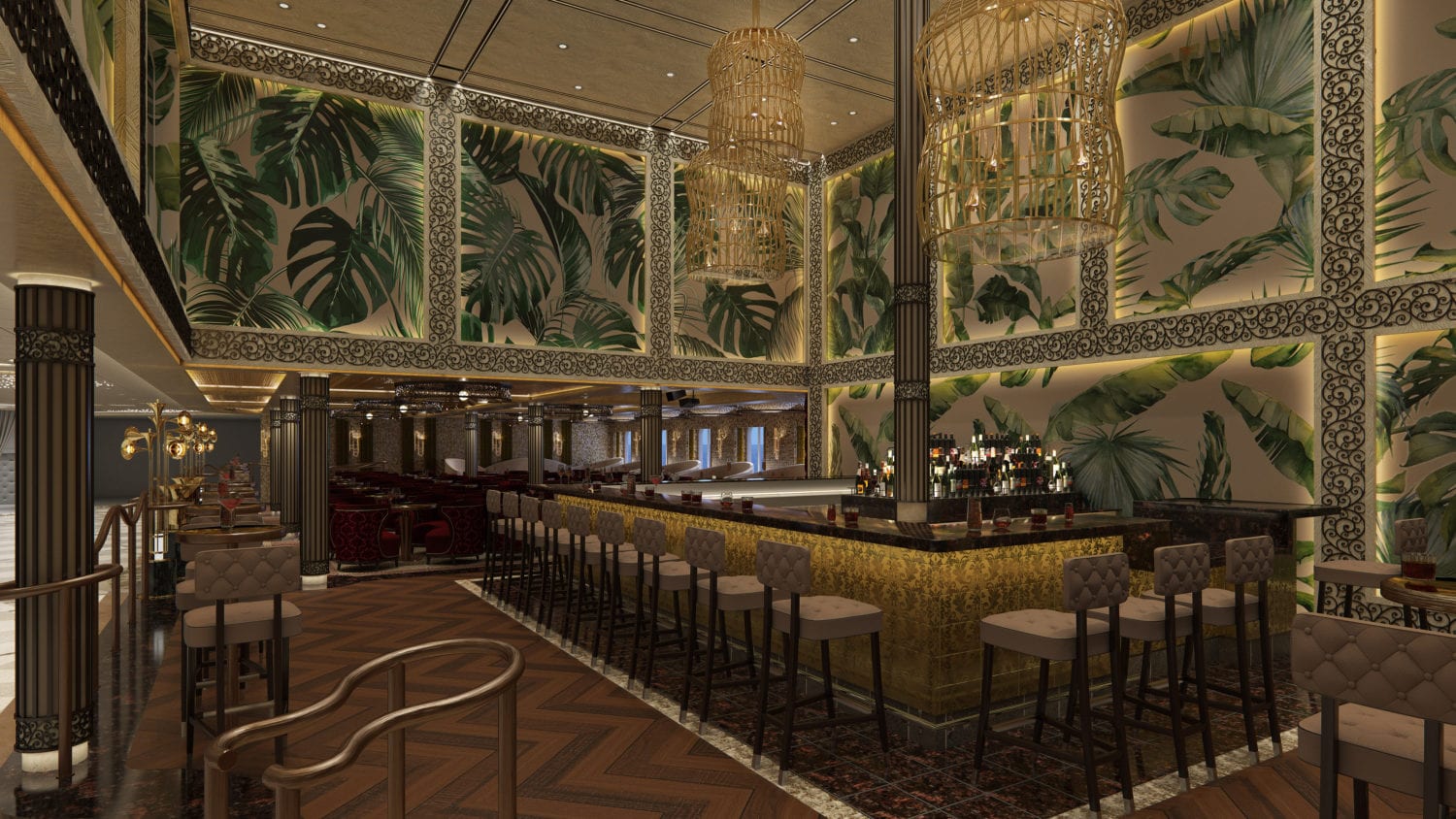 In a nod to the New Orleans’ culture that combines lively entertainment with an unparalleled food scene, French Quarter will be lined with new bars, music and eateries that perfectly capture the festive spirit of the Big Easy. And since the spirit of New Orleans is so closely tied to the jazz scene, this neighborhood is linked via a two-deck-high promenade leading to a traditional New Orleans jazz club with live entertainment and refreshing hand-crafted libations. More details on these new dining and entertainment choices and the introduction of a new Carnival celebrity partnership will be revealed this spring. 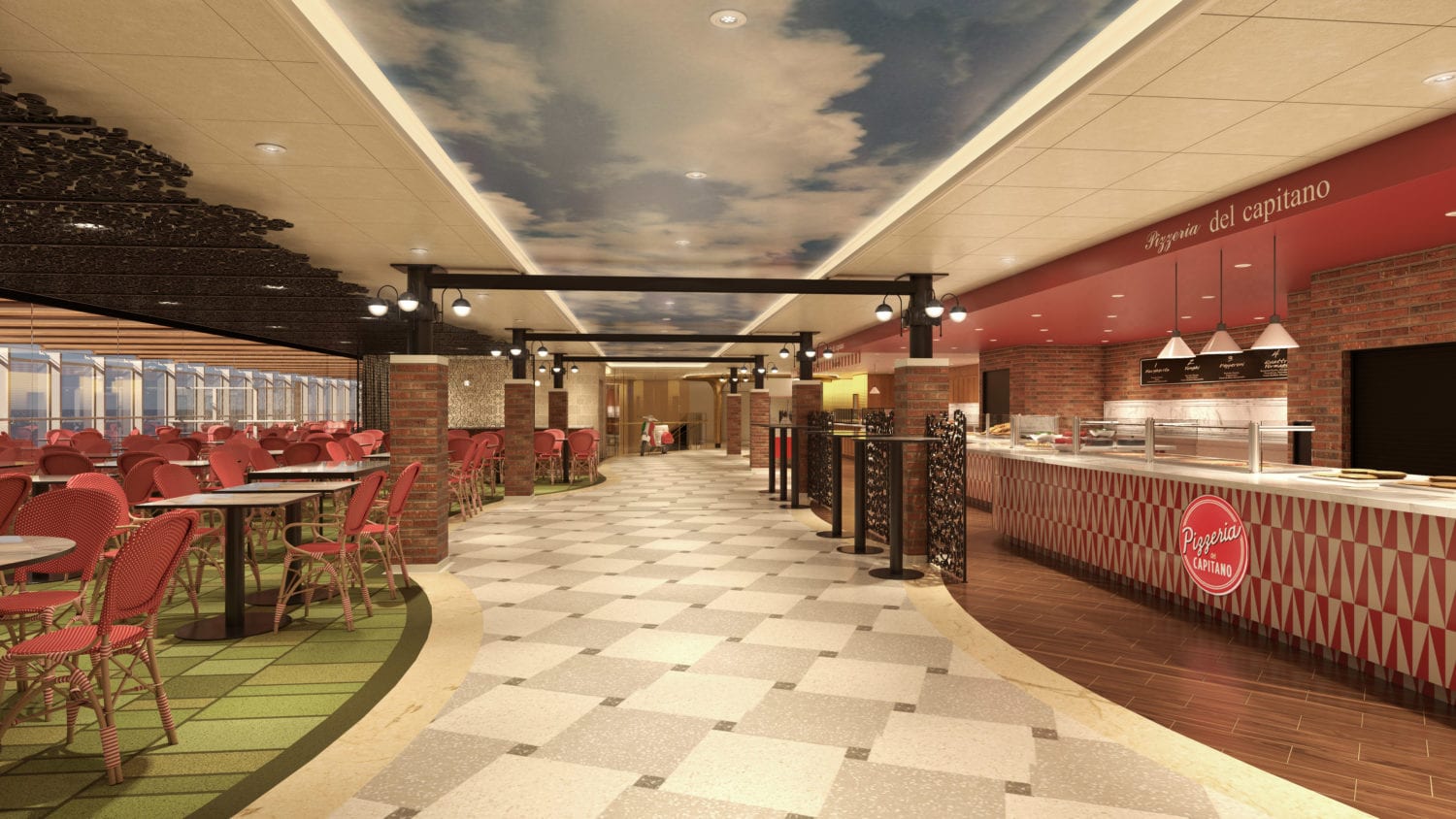 At La Piazza, guests are transported to Italy where they celebrate the rich heritage of Carnival’s senior officers with authentic cuisine from the casual family-style Cucina del Capitano and 24/7 Pizzeria del Capitano to a new Mediterranean-themed seafood restaurant. There’s also a bar where guests can savor cappuccino by day or classic Italian cocktails at night, while roaming musicians keep everyone entertained.

Designed as the ultimate chill spot, Summer Landing will be home to an expanded Guy’s Pig & Anchor Smokehouse Brewhouse with smoked-on-board barbecue favorites created by longtime Carnival partner Guy Fieri, along with the line’s exclusive ParchedPig craft beers brewed right on board. For outdoor summer-inspired fun, there will be a pool and whirlpools, a new bar, the lunch counter for the Smokehouse Brewhouse along with ample lounging spaces and hang outs, making this the ideal spot to enjoy all the fun that a Carnival vacation experience delivers. 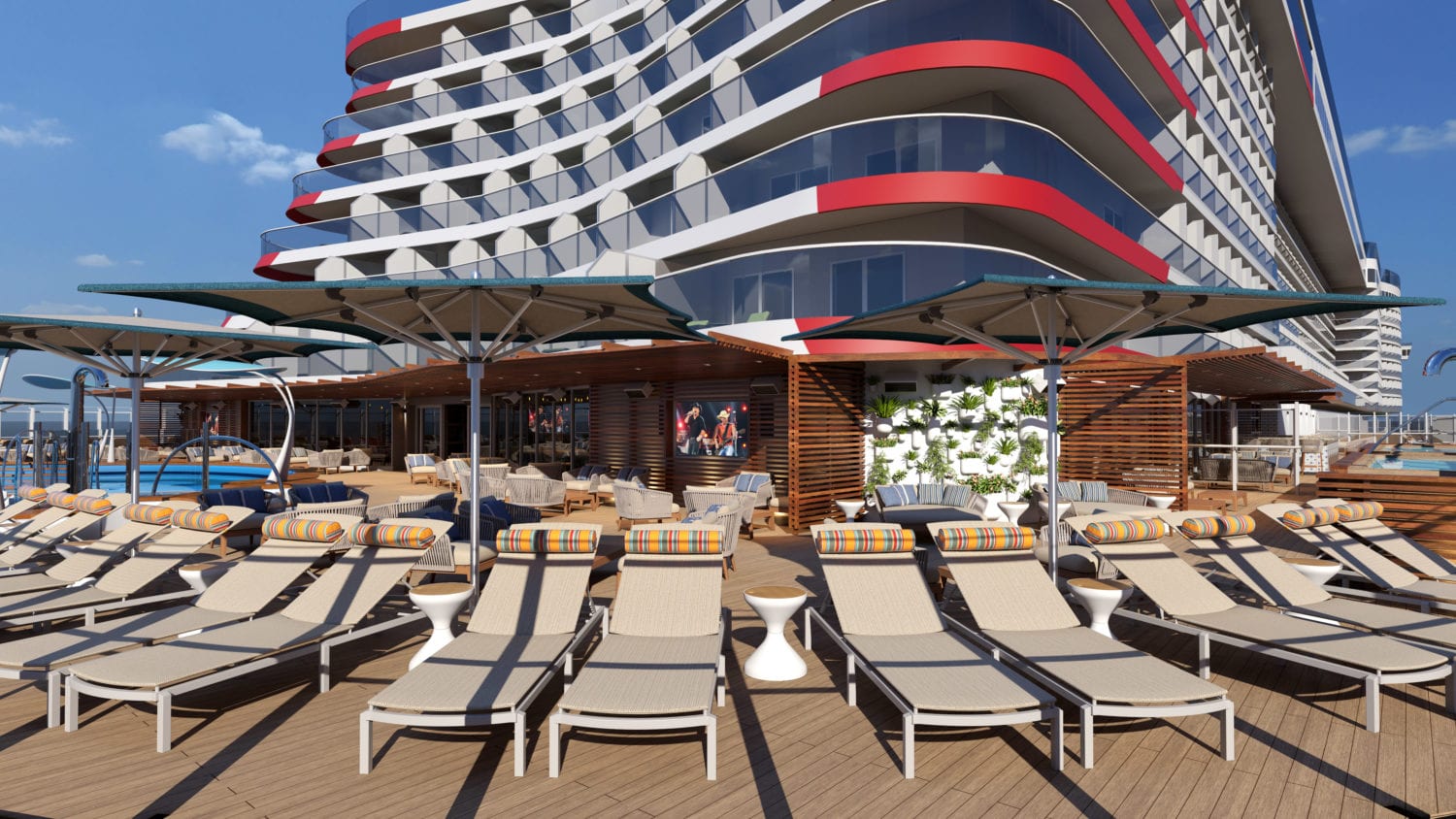 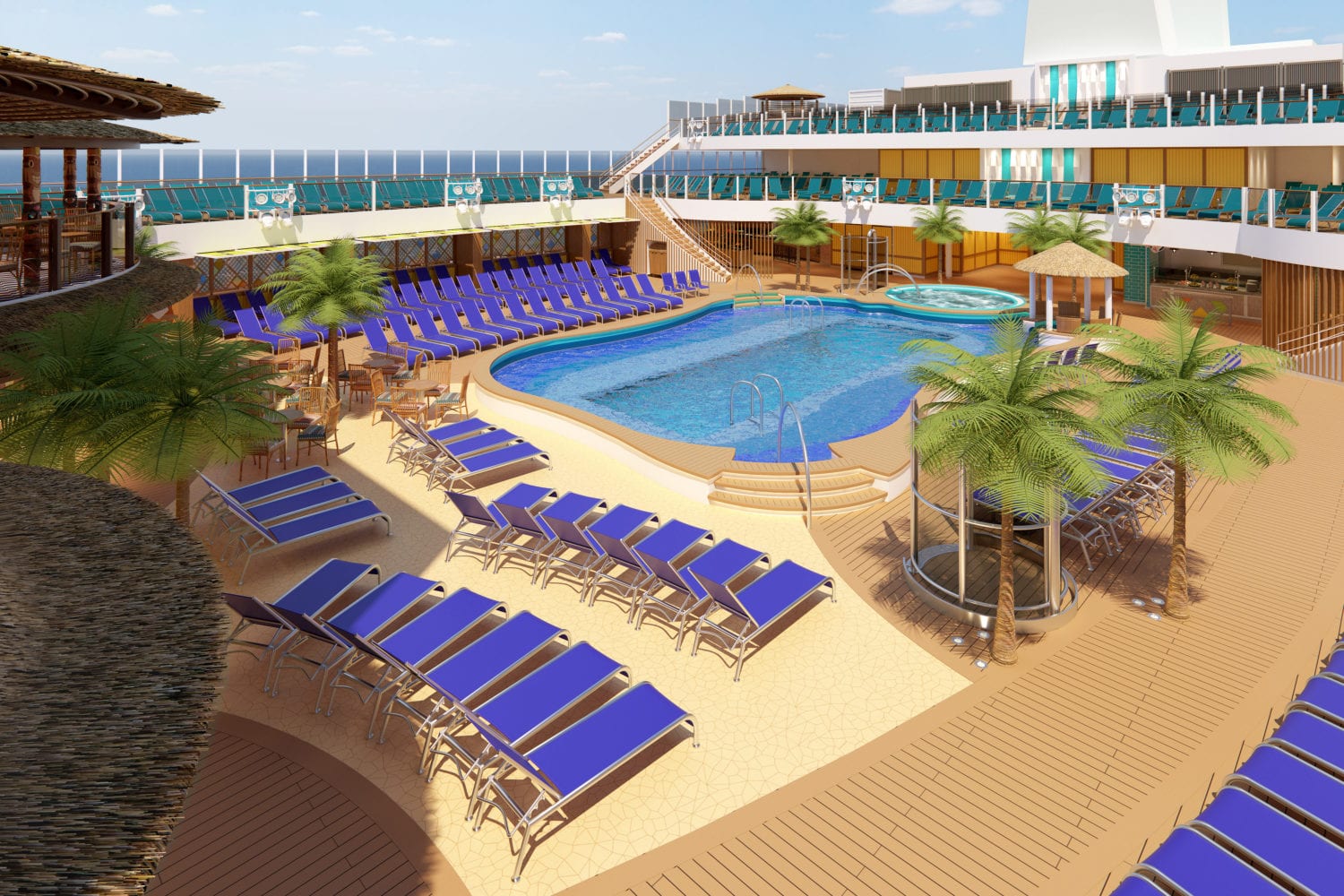 Carnival is already known for its varied casual poolside restaurants and Mardi Gras’ expanded Lido will take this to a whole new level with existing Carnival favorites like Guy’s Burger Joint, the New England-inspired Seafood Shack, and BlueIguana Cantina Mexican eatery, along with some new concepts to be announced at a later date that are sure to inspire foodie fans.

The aptly named Ultimate Playground will span Decks 18-20 and offer guests amazing sea vistas as they soak up the sun and the fun in this spacious family-friendly play area highlighted by the largest and most elaborate Carnival WaterWorks aqua park in the fleet, along with an expanded SportSquare. The Ultimate Playground is also where guests will find the much-anticipated BOLT: Ultimate Sea Coaster, the first rollercoaster at sea announced in December 2018, where riders race along an 800-foot-long track achieving speeds of nearly 40 miles per hour. 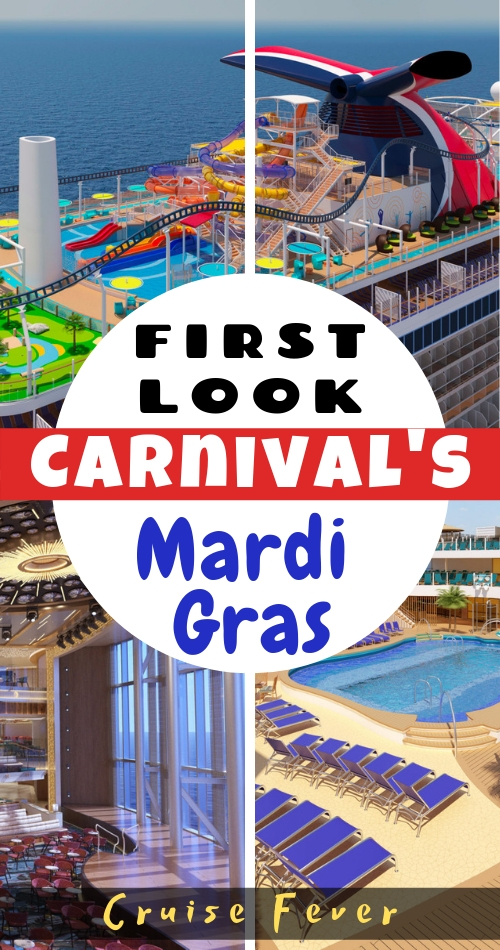 ABOUT US
Two brothers started Cruise Fever in 2011 when they decided they couldn't stop cruising so they might as well write about it. Do you have Cruise Fever too? Follow along on this incredible voyage!
FOLLOW US
© 2011-2021, Cruise Fever ®. All rights reserved
34.3K Shares
Share33.9K
Tweet
Pin399
Email
Share