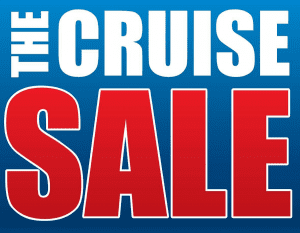 Cruise lines are offering more cruise deals than ever before on Cyber Monday 2013. Last year, only 3 cruise lines participated in the largest online shopping day of the year and that number will likely triple in 2013. If you missed out on the Black Friday sale, you will have even more options to choose from on Monday.

This year’s deals are available for Princess, Royal Caribbean, Disney, Norwegian, Celebrity, Azamara, MSC, and Cunard. The list below will be updated as other cruise lines announced what they will be offering on December 2, 2013.

Princess Cruise Line: Princess is expanding the cruise deals that they offered for Cyber Monday in 2012 with the 3-5 day “Getaway Cruises” on sale. They will also be giving away a free bottle of wine, on board credit to spend on the ship, and free cabin upgrades.

Royal Caribbean: Royal Caribbean is also upping the ante on the cruise deals that they offered in the past. RCI will be holding one of their popular 3 day WOW sales. The WOW sale will start on Cyber Monday (December 2) and run until December 4. Along with the discounted cruise fares, deposits will be reduced to 50% and guests will receive up to $200 in onboard credit per stateroom for select cruises in 2014-2015.

Norwegian Cruise Line: Norwegian will be continuing with their Black Friday Thanksgiving Day sale that is offering up to $250 in stateroom credit and air credits up to $1,000. Past guests, members of the military, and AARP members will receive discounted rates.  Ships included in this sale are the Norwegian Breakaway, Norwegian Getaway, Norwegian Epic, and Pride of America.

Carnival Cruise Line: Carnival is offering 5 specials deals for Cyber Monday. They are 50% off deposits, Pack & Go savings up to 45% off, Resident Sale up to 47% off, singles do not have to pay the double occupancy rate, and triple & quad rooms in groups will have a 40% savings.

Cunard Line: Cunard will be offering their first ever Cyber Monday Cruise Sale with 7 night cruises starting at $999 per person. Along with the reduced cruise fares, passengers will receive free gratuities for 2, up to $200 in airfare credit, and up to $200 in on board credit.  This sale will apply to new bookings only.

Disney Cruises: Disney is offering special rates on cruises out of Port Canaveral. DCL is offering 20% and more on select 3 night Disney Magic and 4 night Disney Dream Bahamian cruises. Stateroom cabins in IGT, OGT, and VGT are eligible for this special sale.


MSC Cruises: MSC is offering Caribbean and European cruises starting at $329 a person. Select cruises in 2014 will also receive up to $300 in onboard credit. When booking, ask for the “MSC Deals to Sea” promotion.

Celebrity Cruises: Celebrity a special 24 hours sale where additional guests sail for FREE (after the first two in a stateroom).  Fares start as low as $199 a person.

Azamara Club Cruises: Luxury cruise line Azamara is also offering their first ever Cyber Monday promotion that is giving passengers up to $500 in stateroom credit on qualifying cruises. The promotional code of (AZACYB) must be used when booking.

Cruise shirts under $10 each.

Cruise Fever will continue to monitor the cruise deals that will be offered on Cyber Monday and will update this page when the sales are announced by the cruise lines.