Haiden Morgan is being called a miracle baby after being born 4 months premature on a cruise ship weighing just 1 pound, 8 ounces. 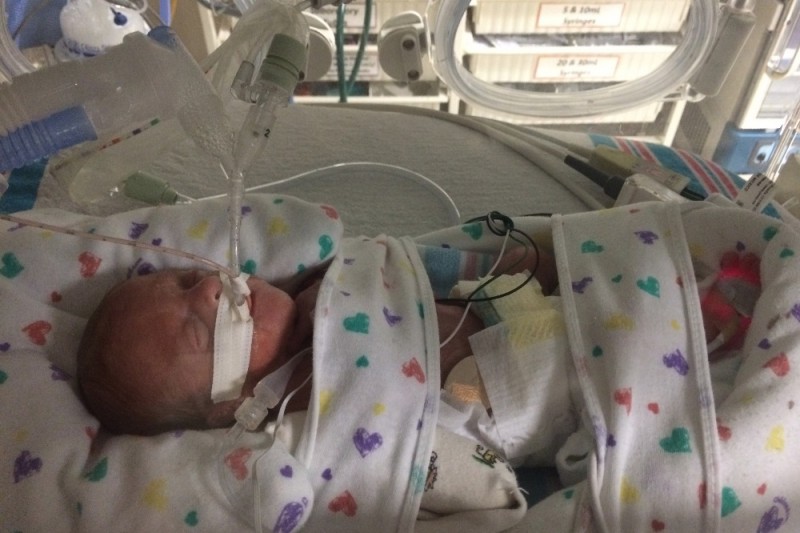 The Morgan family from Ogden, Utah was enjoying a seven night cruise on Royal Caribbean’s Independence of the Seas. Emily Morgan wasn’t due with her second child for another four months so her doctors had cleared her to take the cruise.

On the second night of the cruise, she began having contractions and gave birth to Haiden, a baby boy weighing just 1 pound, 8 ounces.  The doctors onboard helped with the delivery of the baby, but did not expect him to survive.  However, he did survive but had a very low chance of survival.  The doctors wrapped him in blankets since there was no incubator on the ship.

The staff onboard made a makeshift incubator with microwaved saltine packets.  They used a sanitary napkin to keep his head warm and tried to avoid touching his sensitive skin.  A tiny oxygen mask was used to help him breathe.

Black spots had begun to appear on the baby’s fingers, a sign that he was starting to lose circulation. The ship wasn’t scheduled to arrive in San Juan, Puerto Rico for another 14 hours.

The ship traveled at top speed and was able to arrive in port two hours early, two hours that doctors believe saved his life.

Haiden was immediately transferred to a hospital in Puerto Rico where he stayed for three days, before being sent to Nicklaus Children’s Hospital in Miami.

Haiden is now in stable condition and has a fully developed pair of lungs.  He will continue treatment at the Primary Children’s Hospital in Utah until December.

The family has set up a GoFundMe page to help with medical expenses and has received nearly $20,000 in donations so far.