A menu from the last luncheon on RMS Titanic is expected to fetch up to $70,000 when the menu goes up for auction at the end of September. 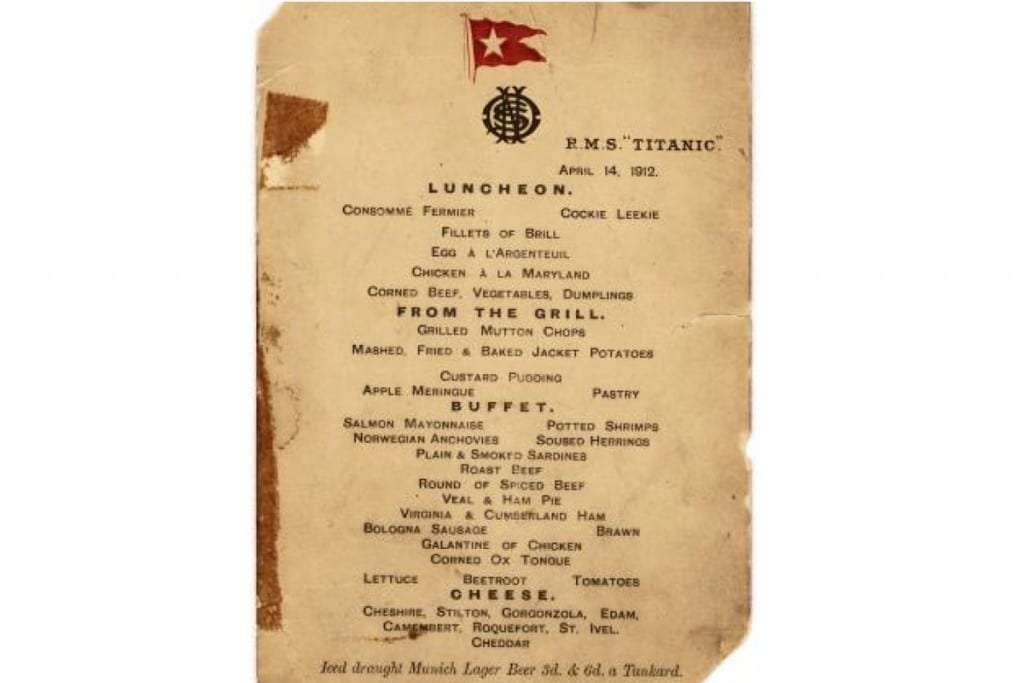 The auction for the menu will be held on September 30 by Invaluable, a live auction house.  The menu is one of only two or three menus from that lunch that are in existence today.  In addition to the menu, a ticket from a weight chair located in the Titanic’s Turkish bath and a letter written by one of the ship’s survivors will also be up for auction.

David Lowenherz, the owner of Lion Heart Autographs, said the luncheon menu is expected to fetch between $50,000 and $70,000. Lowenherz, a rare manuscripts dealer that is behind the auction, gave the following statement:

“This is not an anonymous artifact from an anonymous survivor.  There’s such a story behind the history of the boat and the people who were in it and how their lives were affected by the event”

The menu is stamped April 14, 1912 along with the White Star Line Logo.  It was saved by first class passenger Abraham Lincoln Salomon, who survived the ship’s sinking in Lifeboat No. 1.

RMS Titanic is the most famous ship ever built and sank on its maiden voyage after hitting an iceberg on April 15, 2012.  Out of the more than 2,200 passengers and crew members, only a little over 700 survived.

Australian billionaire Clive Palmer has laid out a plan to build Titanic II, a replica of the most famous ship ever built.  The ship was originally scheduled to go into service in 2016 and built in a Chinese shipyard.

With a waitlist of 50,000 guests interested in booking a voyage on Titanic II, construction on the 2,000 passenger ship has yet to begin.  Reports earlier this year had the project delayed until 2018.

While the ship will be a replica of RMS Titanic, minor changes will me made to comply with boating laws and for the safety of all passengers and crew members.  The ship will have all modern navigational and radar systems, as well as proper modern evacuation procedures.

Cruise Fever reached out to Blue Star Line asking about the progress and status of Titanic II. We were given a statement by Blue Star Line to follow their website for all additional updates.  The last update on BlueStarLine.com.au was published on May 14, 2014.  Many journalists have stated that they believe the project is dead.

If and when the project ever gets off the ground, Cruise Fever will have all updates.

Ben Souza
Ben is a world traveler who has visited 42 countries and taken over 50 cruises. His writings have appeared and been cited in various media outlets such as Yahoo News, MSN, NPR, Drudge Report, CNN, Fox, and ABC News. Ben currently resides in Cincinnati, Ohio. Follow Ben on Instagram. Visit Ben Souza on Linkedin. You may email Ben at [email protected]
Cruise NewsTitanic's Last Lunch Menu Expected to Fetch $70,000 at Auction
Previous article
The Half Mile Long Futuristic Cruise Ship
Next article
Negotiations Taking Place to Bring Carnival Back to Mobile, Alabama