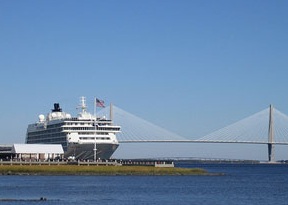 Ever since last year when preservationists and environmentalists in Charleston sued Carnival Cruise Lines, Charleston has been the target of criticism against the cruise industry in the area.

The State Ports Authority plans to build a $35 million cruise terminal on the Charleston waterfront, but the Preservation Society of Charleston and the South Carolina Coastal Conservation League are trying to block any progress on the project and are wanting the judge to declare these operations illegal.

In order for the new cruise terminal to be declared illegal the opponents of the project have had to grasp at far-fetched ideas.  The lawsuit alleges that the cruise liners are a public nuisance, violate city height ordinances and amount to illegal hotel operations.

Circuit Judge Clifton Newman heard more than three hours of arguments and discussion in the case and needs to consider whether or not a ship docked in port is actually a structure governed by city zoning laws.

Frances Cantwell, an attorney for the city, argued a ship isn’t a structure and hotels are considered to be “fixed, permanent and durable and at a land-side location.” While a cruise liner may have rooms, “that’s not its primary purpose. It’s transportation to take people from one place to another.”

Blan Holman is an attorney for the plaintiffs and has gone so far as to say that the Carnival Fantasy, which is now permanently based in Charleston, violates the city’s height ordinance and blocks views of the water.

Holman went on to say that the ship’s red, white and blue whale-shaped smokestack violates the local sign ordinance because it’s also the advertising logo for the company.  This was countered by the opposition saying that this is not the purpose of the smokestack which is to handle the smoke.

Julius Hines, representing Carnival, disagrees, and stated that the Carnival Fantasy, like all other cruise lines, operates under a vessel general permit issued by the EPA.  Putting the cruise ship under the same guidelines and parameters as a structure in the city would be the only case where a cruise line’s ship had these same requirements.

Personally we would love to see more cruise options out of Charleston.  We understand the concerns with the new terminal, but would love to hear comments from our readers on this.  Just drop us a note below.

J. Souza
Jon got hooked on cruising after his first cruise on his honeymoon, and today he is always looking for cruise deals and reading information about the cruise industry. Jon lives in the foothills of North Carolina and wishes there were a cruise port that far inland. Jon can be reached at [email protected]
Cruise NewsCharleston Cruise Lawsuit Reveals Key Arguments
Previous article
Carnival Cruise Lines Changes Policy for Travel Agents
Next article
River Cruise Ship Fire Causes Evacuation in Germany