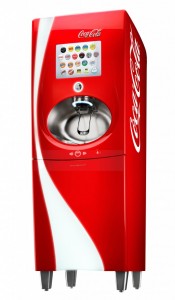 Royal Caribbean Cruise Line Director of Fleet Beverage, Bob Midyette, has announced that their fleet will begin adding Coca-Cola Freestyle Machines.   Royal Caribbean will be the first cruise line in the world to make these machines available for their passengers.

Designed by Ferrari with the interface of an iPad, these machines are smaller than a standard vending machine and can produce 125 flavors of various Coke products such as peach Coke and grape Fanta Zero.

Changes have been made to these machines to not only work on board ships, but also have several health code modifications for a marine environment.

The machines will have a RFID (Radio Frequency Identification) that will work with their souvenir cups.  The cups will allow passengers who purchase the soda card to serve themselves and will expire at the end of their cruise.

Royal Caribbean has been in talks with Coca-Cola for the last 3 years after Midyette visited their corporate office and was shown the Freestyle Coke machine.

We would love to hear from our readers on this revolutionary new machine that is being added to cruise ships.  Would you be more likely to purchase the soda card if you could serve yourself  125 flavors of Coke products?