Italian officials have announced that the Costa Concordia will be scrapped at a salvage yard at the port in Genoa, Italy.  The port in Genoa is Europe’s most modern port and is also the headquarters for Costa Cruises. 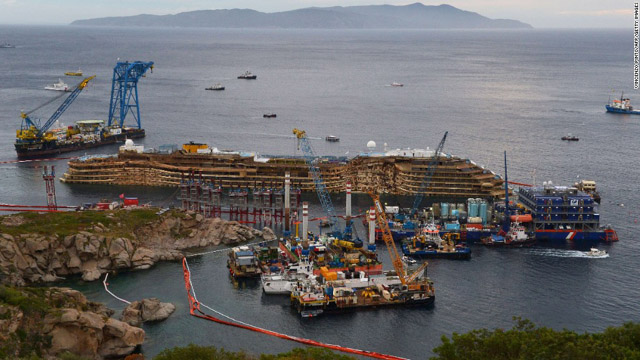 Officials are hoping to start towing the infamous cruise ship on July 20, 2014 to Genoa where the ship will be dismantled and recycled.  Workers are currently on the 4th stage of the removal process.

The cleanup and removal of the ship is expected to cost Carnival Corporation over $1 billion U.S. Dollars.  The parbuckling alone cost $600 million according to chief financial officer of Carnival, Beniamino Maltese.

The Costa Concordia is the largest vessel ever to be parbuckled.  Parbuckling is the righting of a sunken vessel using rotational leverage. The five stage of the removal process are:

The Concordia was pulled upright last September and was live streamed throughout the world.  Worried about the weather, officials decided to wait until the winter months were over before finally towing the ship to a salvage yard.

Titan Salvage is overseeing the parbuckling and removal process of the ship. The Costa Concordia has been sitting in the waters off the Italian coast since January 13, 2012 when the ship hit a reef off the coast of Italy killing 32 passengers and crew members.

Francesco Schettino, the captain of the Costa cruise ship, has been charged with manslaughter and abandoning his ship. He was performing a move called a “salute”, sailing just 300 meters off the shore when the ship hit the reef, tearing a hole in the hull of the vessel.  Schettino faces up to 20 years in prison if he is found guilty.

Cruise Fever will continue to monitor the cleanup of the Costa Concordia and will have all updates as the removal process continues.