Princess Cruises is Sued Over Failure to Rescue Stranded Fishermen 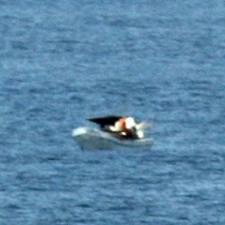 Almost a month ago we wrote about the Panamanian fishermen who were stranded at sea for more than 2 weeks and then spotted by a couple bird watchers aboard the Star Princess.  The cruise liner, however, kept on going and never made an attempt to rescue the fishermen.  Two of the men in the boat died (Elvis Oropeza, 31, and Fernando Osorio, 16), and one survived for an incredible 28 days, while waiting for rescue.

The sole survivor of that fishing vessel, Adrian Vasquez (18), has now filed a lawsuit in Florida against the cruise line, alleging negligence.

Testimonies of the 2 bird watchers on the Star Princess will be heard in court, which will be essential in this case.  Cruise passengers, Jeff Gilligan and Judy Meredith or Oregon spotted the boat through their bird-spotting scope and saw three men in the small fishing vessel, with one of them waving a red t shirt.

Meredith has said she tried to notify the cruise line right away and told a sales representative about the boat and even let the staff member see it through the scope.

But after being reassured that the message would get passed along to the captain and crew, nothing more was done.

For 2 more weeks Vasquez survived from day to day aboard the fishing vessel, having to dispose of his friends bodies into the ocean waters.

The captain of the Princess ship, Edward Perrin, has stated that he was never informed of the situation and therefore cannot be held liable.  Princess Cruises said there appeared to have been a “breakdown in communication”.

Meredith even went an extra step in emailing the US Coast Guard with the coordinates hoping they would be able to find and rescue the stranded men.  But as the boat drifted further away from those given coordinates it became more difficult to find and it was the Ecuadorean coast guard that eventually picked up the boat near the Galapagos islands.

Vasquez said that he was able to survive after his friends had died because of a sudden rain storm that replenished his drinking supplies.

We will attempt to keep our readers informed on the details of this case as they develop.

J. Souza
Jon got hooked on cruising after his first cruise on his honeymoon, and today he is always looking for cruise deals and reading information about the cruise industry. Jon lives in the foothills of North Carolina and wishes there were a cruise port that far inland. Jon can be reached at [email protected]
Cruise NewsPrincess Cruises is Sued Over Failure to Rescue Stranded Fishermen
Previous article
Norovirus outbreak hits Carnival Cruise Ship
Next article
Sea Trials Completed, Carnival Breeze to Debut on June 3