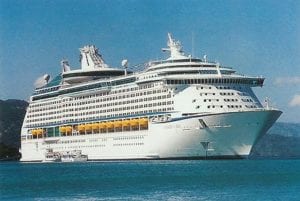 China is a big part of Royal Caribbean’s plans in Asia.  In fact, Royal Caribbean president Adam Goldstein has said, “2012 is for our company the year of China”.

China’s growing tourism market will soon be introduced to what will be the 2 largest cruise ships in the region.  Royal Caribbean’s Voyager of the Seas is set to arrive in Singapore this weekend on its way to Shanghai.

A second ship, Mariner of the Seas, is already being committed to China as well, before the first ship even arrives.  Both of these ships are part of Royal Caribbean’s Voyager Class and they can hold over 3,000 passengers with their 15 decks.

Both of these ships also have ice skating rinks, a rock climbing wall, a 9 hole mini-golf course, 3 swimming pools, and many other amenities.

Royal Caribbean is taking the unusual step of committing a second ship to a new market before its first vessel has arrived because of China’s significance to the company’s plans, chairman Richard D. Fain said. The U.S.-Norwegian line is based in Miami.

“We see Asia in general and China in particular as a major strategic objective for our company,” Fain said. “China has proven to be a very special market.”

There is no word yet on when exactly the Mariner of the Seas will be sent to China, but the company is currently taking bookings on the ship through the spring of 2013 for cruises out of Galveston.

J. Souza
Jon got hooked on cruising after his first cruise on his honeymoon, and today he is always looking for cruise deals and reading information about the cruise industry. Jon lives in the foothills of North Carolina and wishes there were a cruise port that far inland. Jon can be reached at [email protected]
Cruise NewsRoyal Caribbean to Be Sending China Its Two Largest Cruise Ships
Previous article
Memorial Day Cruise Deals for 2012
Next article
How will Tropical Storm Beryl affect cruise ships?