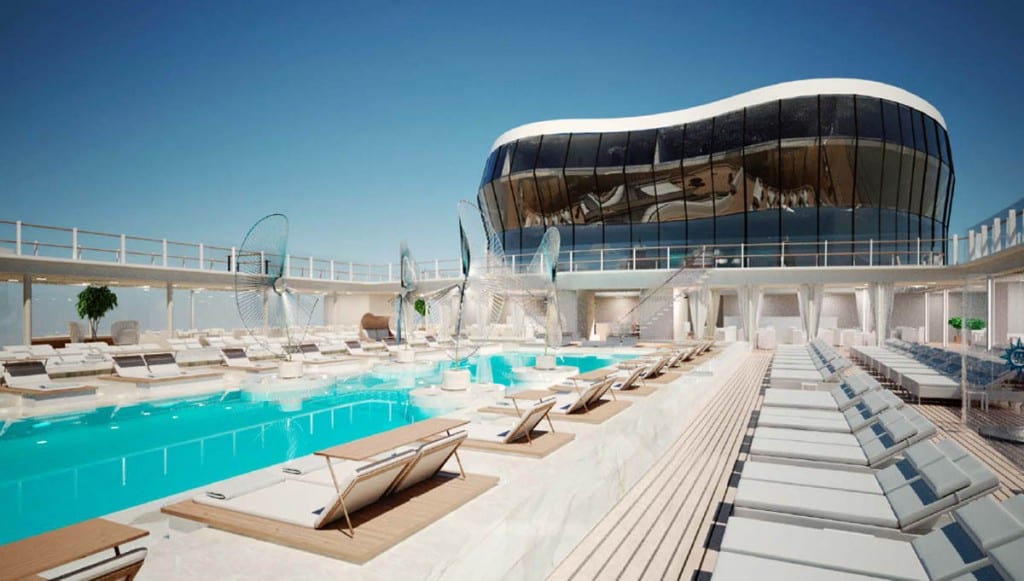 During the steel cutting ceremony, MSC Cruises announced that the ship will be called MSC Meraviglia and will open for bookings in June 2015.  When completed in 2017, this 167,600 gross ton ship will be one of the top 10 largest in the world and carry 4,500 passengers at double occupancy.

MSC Meraviglia will spend her first summer cruising to the Western Mediterranean will also have three homeports: Genoa, Marseille, and Barcelona.  The ship will be one of the safest and greenest cruise ships ever built, and will include technological advancements that will rival the top ships at sea.

What features will MSC Meraviglia have?  One jaw dropping feature will be a 5,167 square foot LED screen that will form the entire ceiling of the ship’s interior promenade.  This digital sky will create powerful images and vistas day and night creating a powerful atmosphere.  The ship will also have a wide variety of dining options, a large theatre, and a “spectacular” amusement park that will be linked to the outdoor aqua park.

One feature that parents will love is “Near Field Communication” technology.  This will enable passengers to geo-locate their children, make onboard payments, and open their staterooms via their smartphone, bracelet, or cruise card.  There will aslo be an extended MSC Yacht Club and “cluster cabins” for families.

MSC Meraviglia will be the biggest and most innovative cruise ship ever built by a global European-based cruise line. We chose a name that denotes the sense of awe and wonderment felt when you experience the ship’s stunning features, which only an MSC cruise, with its unique Mediterranean-style, can deliver.

MSC Meraviglia brings together the industry know-how of MSC Cruises, a young, bold company built upon 300 years of seafaring tradition and the expertise of one of the most advanced shipyards in the world. Today, building started on a true maritime marvel.

MSC Cruises is planning on doubling their cruise capacity by the year 2022.  The cruise line has up to seven cruise ships on order in a $5.4 billion investment plan.  Since 2004, MSC Cruises has grown capacity by 800% and carried 1.67 million passengers in 2014.

MSC Meraviglia will be the first of two identical ships with the second scheduled to enter service in 2019.  The cruise line has an option for an additional two Vista class ships.

Along with the Vista class ships, MSC Cruises is also building two Seaside class ships that are scheduled to enter service in 2017 and 2018.  The first named MSC Seaside, will sail out of PortMiami and cruise year round to the Caribbean.  The cruise line also has an option for a 3rd Seaside class ship.