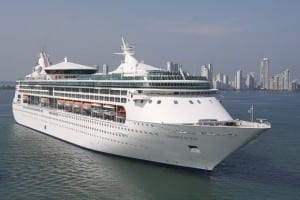 Royal Caribbean’s Grandeur of the Seas is battling a sickness onboard the cruise ship for the second straight week.  Although the exact cause of the illness is unknown at this time,  the suspected culprit is the norovirus.

The passengers and crew members have been treated with over the counter medications and Royal Caribbean has been using a special cleaning disinfectant since the outbreak began.

Royal Caribbean has planned an increased cleaning and disinfection of the Grandeur when the ship arrives back in Baltimore on April 12, 2014.  There will also be a staged disembarkation for active cases to help limit the spread of the sickness.  They also plan a sanitation of the cruise terminal.

The cruise line is working with the Centers for Disease and Control and is collecting specimens that will be sent to the CDC lab.  Two CDC Vessel Sanitation Program health officers and an epidemiologist will board the cruise ship on April 12 to conduct an environmental health assessment, evaluate the outbreak, and conduct an epidemiologic investigation.

Sickness such as the norovirus are easily spread on places as cruise ships where there are many people confined to a small area.  The sickness is also quickly spread in schools, dorm rooms, and healthcare facilities.

Royal Caribbean is letting any passenger who is uncomfortable with cruising on the April 12-19 sailing reschedule for another cruise.

Cruise Fever will update this page if and when more information becomes available on this latest suspected norovirus outbreak.

Ben Souza
Ben is a world traveler who has visited 40+ countries and taken over 70 cruises. His writings have appeared and been cited in various media outlets such as Yahoo News, MSN, NPR, Drudge Report, CNN, Fox, and ABC News. Ben currently resides in Cincinnati, Ohio. Follow Ben on Instagram. Visit Ben Souza on Linkedin. You may email Ben at [email protected]
Cruise NewsSickness Continues on Royal Caribbean Cruise Ship, Norovirus Suspected
Previous article
MSC Cruises Runs Unannounced Emergency Drill in the Form of a Pirate Attack
Next article
Quantum of the Seas Headed to China in 2015