Oasis of the Seas Rescues 23 Cubans at Sea

Royal Caribbean’s Oasis of the Seas was able to be more than an oasis to the 23 Cubans who were stranded at sea in their vessel which was just drifting near the Cayman Islands on April 4th.

The Oasis was able to rescue the people on the drifting ship as it was on its way to Cozumel Mexico from Falmouth, Jamaica, after leaving its home port at Port Everglades.

The crew of the incapacitated ship had been at sea for 21 days and were given clothing along with medical aid from the  humanitarian crew of the Oasis.

This is not the first time the Oasis has offered its aid to stranded seafarers, and the ship has once again been willing to offer its services to the 19 males and 4 females who were reportedly offered basic medical treatment along with food and water.

One of the largest cruise ships in the world (along with the Allure of the Seas) was sailing to Cozumel when some of the passengers aboard spotted the stranded vessel.  After bringing the stranded crew aboard and giving them treatment, the ship alerted the U.S Coast Guard.  The authorities directed the crew of the Oasis of the Seas to take the refugees to Cozumel and leave them there. 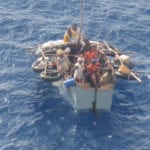 This was standard procedure due to the fact that the ship picked up the refugees outside of U.S. waterways.

There are no further details at this time, but you can check out a recent video that has been uploaded by one of the passengers on the Oasis.  And if you were on this ship and have any more insight we would love to hear from you in a comment below.

J. Souza
Jon got hooked on cruising after his first cruise on his honeymoon, and today he is always looking for cruise deals and reading information about the cruise industry. Jon lives in the foothills of North Carolina and wishes there were a cruise port that far inland. Jon can be reached at [email protected]
Cruise NewsOasis of the Seas Rescues 23 Cubans at Sea
Previous article
Titanic Memorial Cruise Departs from England
Next article
Royal Caribbean to Send 140,000 Ton Cruise Ship to Asia?