The conveyance of Royal Caribbean’s Anthem of the Seas down the Elms River will begin begin on Tuesday at 9:00 a.m. ET.  The ship will maneuver backwards from the Meyer Werft Shipyard down the river to the North Sea guided by two 9,000 horsepower tugboats.

The 32 kilometer trip (20 miles) will take 10 hours and thousands of spectators are expected to watch the conveyance along the Elms River.  Below are two interesting inforgraphics that show details about the conveyance and the cruise ship.  Anthem of the Seas will sail her first voyage with passengers on April 22, 2015 for an eight night sailing out of Southampton, England.  The ship will sail out of Southampton for six months before heading over the Atlantic and be based out of Cape Liberty Cruise Port in New Jersey. 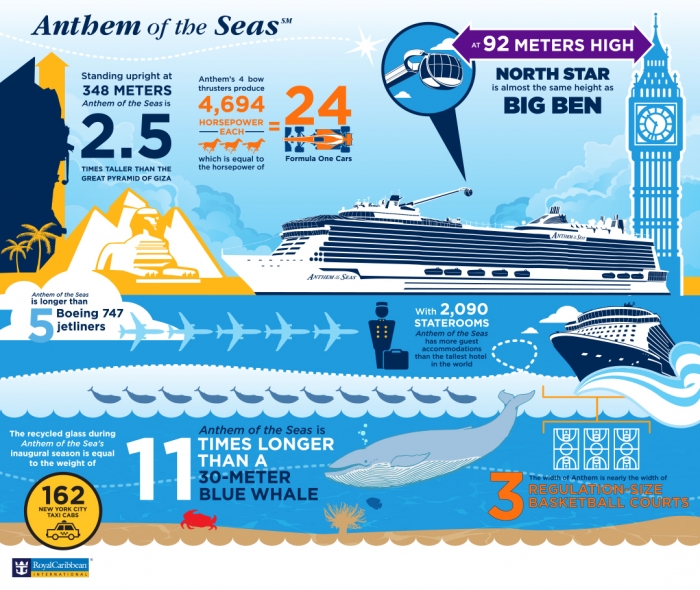 Ben Souza
Ben is a world traveler who has visited 42 countries and taken over 50 cruises. His writings have appeared and been cited in various media outlets such as Yahoo News, MSN, NPR, Drudge Report, CNN, Fox, and ABC News. Ben currently resides in Cincinnati, Ohio. Follow Ben on Instagram. Visit Ben Souza on Linkedin. You may email Ben at [email protected]
Cruise Facts Anthem of the Seas Infographic - Conveyance Facts
Previous articleConstruction Officially Begins on Royal Caribbean’s Next Smart Ship
Next articlePrincess Cruises Raises the Bar on Cruise Entertainment with Stephen Schwartz Partnership

Norwegian Cruise Line currently has 16 cruise ships in its fleet. In terms of passengers carried, it is the 3rd largest cruise line in...
Read more
Cruise Facts

MSC Cruises currently operates 16 cruise ships and is the world's largest privately held cruise company. With cruise ships all around the world, MSC is...
Read more

Norwegian Cruise Line currently has 16 cruise ships in its fleet. In terms of passengers carried, it is the 3rd largest cruise line in...
Read more
Cruise Facts

Ben Souza - September 29, 2022
Four Seasons, one of the world's most well known luxury hotels, is launching their first luxury yacht in 2025 and will have a guest...