Holland America’s Dancing with the Stars at Sea is Huge Hit, Now on All 15 Ships 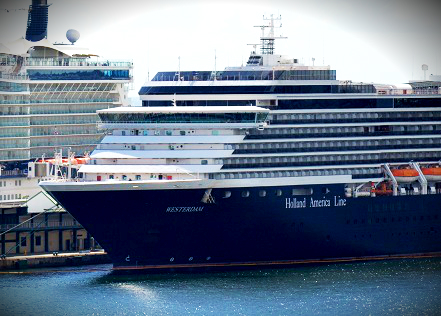 Last year, Holland America teamed up with “Dancing with the Stars” to offer cruise passengers one of the most unique experiences at sea.

The resulting “Dancing with the Stars at Sea” was based on the ABC hit TV show and it was so successful last year that the contract has been renewed until the end of this year.

As ballroom dancing has always been a part of Holland America’s  cruising repertoire, the  new onboard activities allow for passengers to be both spectators and participants in guest competitions modeled after the “Dancing with the Stars” TV show.  For some cruises the cruise line actually brings on celebrity talent to dance with guests in the competitions.

Dance classes are provided for the guests and every session begins with professional ballroom dancer Kym Johnson going over all the dance moves and steps in a pre-recorded video.

Holland America’s ship dancers will then work with each guest who wants to participate in the program and select guests who are standouts to be in the dancing competition.

A cruise ship dancer will be paired with each qualifying guest and just like on the TV show, a panel of judges will evaluate each dancing performance.    These judges will consist of ship officers, ship dancers and staff.

But it’s the audience that votes for which dancing couple is the winner, and by sheer volume of applause the winner is declared.

At the end of the year all of the winners from each cruise will all be invited for a complementary cruise aboard the Holland American ms Westerdam for the championship round, where 15 finalists will compete aboard the December 6th cruise in the Caribbean.  The winner will receive a mirrored globe trophy just like the one on the TV show.

Besides the dancing competition there will be a photo and autograph session for the passengers as well as a fashion show in which dancers will wear all kinds of vibrant and elaborate dresses and costumes.

Each of Holland America’s 15 cruise ships will host Dancing with the Stars at Sea.

Holland America will also have 6 themed cruises in which the television show’s professional dancers and celebrities will join guests for a special “Dancing with the Stars at Sea” experience.

The dates for the 6 themed cruises are as follows:

J. Souza
Jon got hooked on cruising after his first cruise on his honeymoon, and today he is always looking for cruise deals and reading information about the cruise industry. Jon lives in the foothills of North Carolina and wishes there were a cruise port that far inland. Jon can be reached at [email protected]
Cruise NewsHolland America’s Dancing with the Stars at Sea is Huge Hit, Now...
Previous article
Norwegian Cruise Line Offering Their Biggest Sale of the Year
Next article
Ruby Princess Cruise Ship Review and Video Tour