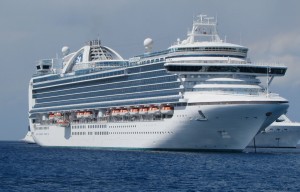 I recently had the chance to take a 5 night cruise on the Ruby Princess for Cruising with a Cause, Princess has Heart.  The Ruby is currently sailing 4 and 5 night cruises out of Ft. Lauderdale, FL to the Caribbean as part of the “Getaway Cruises” by Princess.

The Ruby is a 3,000 passenger cruise ship that consists of 19 decks, although passengers only have access to decks 4-19.  As with most ships, the layout took a few days to get used to.  Overall, the decor of the ship was beautiful and the public areas never seemed crowded or congested.

As with any other cruise ship, there are an abundance of places to eat on the Ruby Princess.  There are three main dining rooms: Botticelli, Da Vinci, and Michelangelo.  Botticelli is reserved for guests who have traditional cruise dining times (early and late seatings) while the other two dining rooms are for guests who have anytime dining.  Da Vinci was also open for breakfast (7:00 a.m. – 9:00 a.m.) and for lunch (Noon – 1:30 p.m.).

Since food is subjective, I won’t go into too many details about it.  However, the menus had a nice variety and I enjoyed everything that I ordered.  All food that is served on the Ruby Princess is made from scratch.

I had the opportunity to try the two specialty restaurants onboard the Ruby, both have a $25 surcharge per person for dining at them.  The Crown Grill is a steakhouse that offers aged beef and select seafood.  I ordered the filet mignon and it was booked perfectly, on par with a fine steakhouse back home.  Sabatini’s is the other specialty restaurant and it is an Italian themed eatery with an emphasis on premium seafood.  I loved the decor of Sabatini’s and the food and service were excellent. 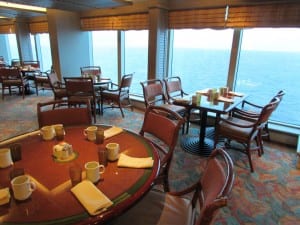 The main buffet on the ship is the Horizon Court.  It is open for breakfast, lunch and dinner and the service was exceptional.  I never had to wait more than 10 seconds after sitting down before I was asked what I wanted to drink.  Usually, it was within 3 seconds, the wait staff was really on top of it.  The tables at the Horizon Court have silverware, cups, and napkins already set in place.  I hope other cruise lines learn from this, it’s not fun trying to juggle your plate full of food, silverware and a cup of water or lemonade to your table.

The Horizon Court is split into two sections, on the port and starboard sides of the ship.  This setup works well it keeps the buffet area from getting overcrowded.  There is one more buffet at the aft of the ship, Cafe Caribe.  It was only open for lunch with the exception for port days, when it remained closed.

The International Cafe is open 24 hours so there is always a place to grab a bite to eat on the Ruby Princess.  In the mornings, they have freshly made donuts and pastries.  At other times, they have sandwiches , salads, and grilled to order paninis.  There is also a gelato bar that has a small surcharge of $1.50 for 3 large scoops.  This was one of my favorite places to grab a coffee and a small snack between meals.

The Trident Grill is located on the pool deck and offers hotdogs, hamburgers etc.   Also on the pool deck is a Pizzeria that has fresh made pizza available from 11:00 a.m. – 11:00 p.m.  You can also have a pizza delivered to your stateroom for a delivery charge of $3.  This was some of the best pizza I have had at sea.  Right next to the Pizzeria is Scoops Ice Cream Bar with a variety of ice cream and toppings. 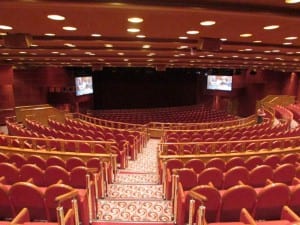 The Princess Theater hosts all of the main entertainment shows at night.  Built into the armrest of each seat is a small foldout table for drinks and there isn’t a bad seat in the theater.  There were two Broadway type shows during the cruise, “Once Upon a Time” and “Broadway Ballroom”.  I caught a few minutes of each show and they were pretty much what I expected.  They were well done and just about what you would expect from a show on a cruise ship.

One night featured the comedy of Rondell Sheridan.  Although I was not able to see his act, I did hear a man raving about him the following day.  His exact words were, “It is amazing how funny someone can be without being raw”.

Another night featured illusionist Landon Swank, a finalist on Season 6 of America’s Got Talent. It was one of the best magic shows I have seen on a cruise ship.  He was entertaining, funny, and kept the audience’s attention throughout the entire show. 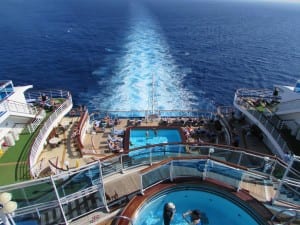 There are 4 main pools on the Ruby Princess and a 5th in the Sanctuary.  The aft pool featured instrumental music and become one of my favorite pools on the ship.  There were also tables set up so you could bring food out from the buffet and enjoy the best view at sea.  There are 2 pools in this area and 2 hot tubs.

The Calypos Reef and Pool is on the main pool deck and is where the “Movies Under the Stars” is located.  The music featured at this pool was also quiet and relaxing.  They showed up to 3 movies a day  and also Pavarotti, Billy Joel, and  Barry Manilow concerts.  The main movie at night was well attended but there isn’t a lot of seating in this area.  Come early if you want a good seat.  They also have plenty of popcorn and blankets available.

Neptune’s Reef & Pool is the “party pool” on the Ruby Princess.  This is where the loud music is played, often by a live band.  The deck parties at night also take place here.

There were always pool chairs and loungers available, even on sea days.  I was surprised at the amount of quiet places that have available around the ship to lay out in the sun, many of them were hardly used.  However, just like on all cruise ships, right by the pools were always the most crowded. 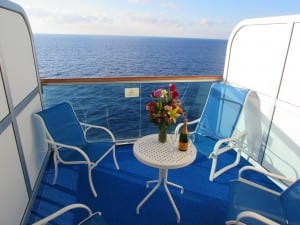 The cabin had a walk-in closet and tons of space to hang clothes.  The bathroom was a standard cruise ship bathroom with a tiny shower. There was also a safe and several shelves for clothes.

There was a stocked mini fridge in the room, with drinks costing anywhere from $2-$7.  The bed was comfortable and the room had several large mirrors. There was a small desk and 2 chairs. The room also had a flat screen TV.

Here is a short video of my stateroom and balcony:

The Lotus Spa is a great place to pamper yourself.  The prices for services are about average for what you find on cruise ships.  They do runs specials on port days so the treatments and massages are cheaper on those days.  They also automatically add on 15% gratuity to the cost of the spa services.

I was pleasantly surprised that there was no hard sell after my massage.  Yes, I was offered to buy a few things but a simple “I think I’ll pass on that today” and the sales pitch was over.

Overall, I really enjoyed the atmosphere of the Lotus Spa.  They offer everything from Swedish massages, bamboo massages, Elmis Aroma stone therapy, seaweed wraps, and other great treatments.

They did have a few free health presentations on sea days that dealt with detox for health and weight loss and secrets to a flatter stomach.  They also have steam rooms and saunas available. Although I did not use the fitness center, I noticed on my walk through that it was similar to fitness centers on other ships that I have been on. 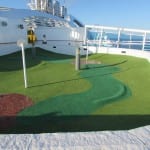 There is a basketball court, mini golf course, and a jogging track on deck 19.  There are also a couple ping pong tables although I never saw anyone using them.

They also had a small video arcade with only 3-4 games. It is really hidden so unless you are looking for it or accidentally stumble across it like I did, you would never know that it was there.

There are a number of lounges around the ship with many of them having live music at night.  Crooners acts as a piano bar and it appeared to be the most popular on the ship.  It also overlooks the popular Piazza area. 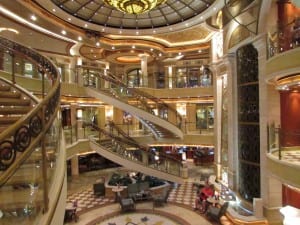 The Piazza area was one of my favorite parts of the Ruby Princess.  This is where the champagne waterfall and the balloon drop took place.  They had a variety of live entertainment, everything from a band playing love songs to a entertainer on a grand piano.

Two very entertaining jugglers put on a few short shows in the area throughout the cruise.  Based on everyone’s reactions, the passengers really enjoyed them.

All of the ship’s shops are in this area along with the casino. The casino offers a variety of slot machines and table games such as blackjack, roulette, craps, 3 card poker etc.  For those who like to play poker, there is a video Texas Hold Em table that was full each night.

The International Cafe is also located here with a good number of table and chairs.

There is an Internet cafe onboard and wifi throughout the entire ship.  Costs start at .75 per minute but are cheaper if you buy a package of minutes.  The speed was slow like on most cruises ship.  It is good for checking your email, Facebook/Twitter/other social media sites, and checking in with family back home.  However, the upload speeds were extremely slow so uploading pictures was a challenge at times.

Overall, I really enjoyed my cruise on the Ruby Princess.  I highly recommend it for couples who are looking to have a quiet, relaxing cruise.  It was one of the most relaxing cruises I have ever taken and reminded me of what cruising should be. The service was outstanding and the staff was friendly and always greeted you with a smile.

The only time the ship felt crowded was when there was an event at night in the Piazza.  I look forward to many more great cruises with Princess.

Ben Souza
Ben is a world traveler who has visited 40+ countries and taken over 70 cruises. His writings have appeared and been cited in various media outlets such as Yahoo News, MSN, NPR, Drudge Report, CNN, Fox, and ABC News. Ben currently resides in Cincinnati, Ohio. Follow Ben on Instagram. Visit Ben Souza on Linkedin. You may email Ben at [email protected]
ShipsPrincessRuby Princess Cruise Ship Review and Video Tour
Previous article
Holland America’s Dancing with the Stars at Sea is Huge Hit, Now on All 15 Ships
Next article
Azamara Cancels Cruise for Repairs After Debris Hits Cruise Ship