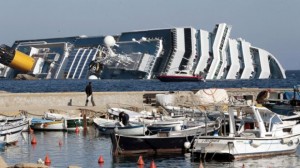 An additional 33 survivors of the Costa Concordia cruise ship accident joined in a lawsuit against Carnival Corp accusing the cruise line of gross negligence and fraud.  The lawsuit was filed in a Miami, Florida courthouse, the headquarters of Carnival.  The 33 survivors were added to the original lawsuit that was filed by 6 surviving passengers in January.  The lawsuit is asking for $528 million in damages ($78 million in compensatory damages and $450 million in punitive).  Carnival Corp is the parent company of Costa Cruise Line.

The lawsuit alleges that the cruise line acted with gross negligence and careless disregard after the January 13 accident.  The ship hit a reef and capsized near the cost of Italy carrying over 4,000 passengers and an additional 1,000 crew members.  The current death total from the shipwreck is at 32.

The muster drill was not performed before the cruise left port several hours earlier.  CLIA (Cruise Lines International Association) has since changed the safety policy and a muster drill must be performed before any cruise ship leaves port.  The previous policy was that it had to take place within 24 hours of embarking.

The lawsuit states:  “Plaintiffs found themselves in a listing, capsizing, sinking vessel without communication, direction or help from the captain and misdirection from the crew from approximately 9:45 p.m. to approximately 11 p.m. and were left to fend for themselves.”.  The captain was off course and many passengers have said that the evacuation was chaotic.

The lawsuit also claims that the company committed fraud when Costa said that they complied with all safety regulations.  The online agreement that passengers agreed to when purchasing tickets online stated that any claims against the company must be filed in Genoa, Italy, where Costa is based.

Costa has offered the surviving passengers of the shipwreck $14,500, a refund of their cruise fare, and the travel costs to get home.  They have until March 31 to accept the compensation.  This offer is only available to those who had returned home.  The families of the missing, those injured, and those who died are covered under a separate proposal based on their individual circumstances.

The plaintiffs in the lawsuit are from the United States, Canada, Italy, Germany, China, Korea, Venezuela, and Kazakhstan.