Opinion Viking Cruises' "In Search of the Northern Lights" Voyages: How They're Different

Viking Cruises’ “In Search of the Northern Lights” Voyages: How They’re Different

Viking Ocean Cruises tried something new this year when it offered winter itineraries in Norway on its “In Search of the Northern Lights” cruises on Viking Sky. 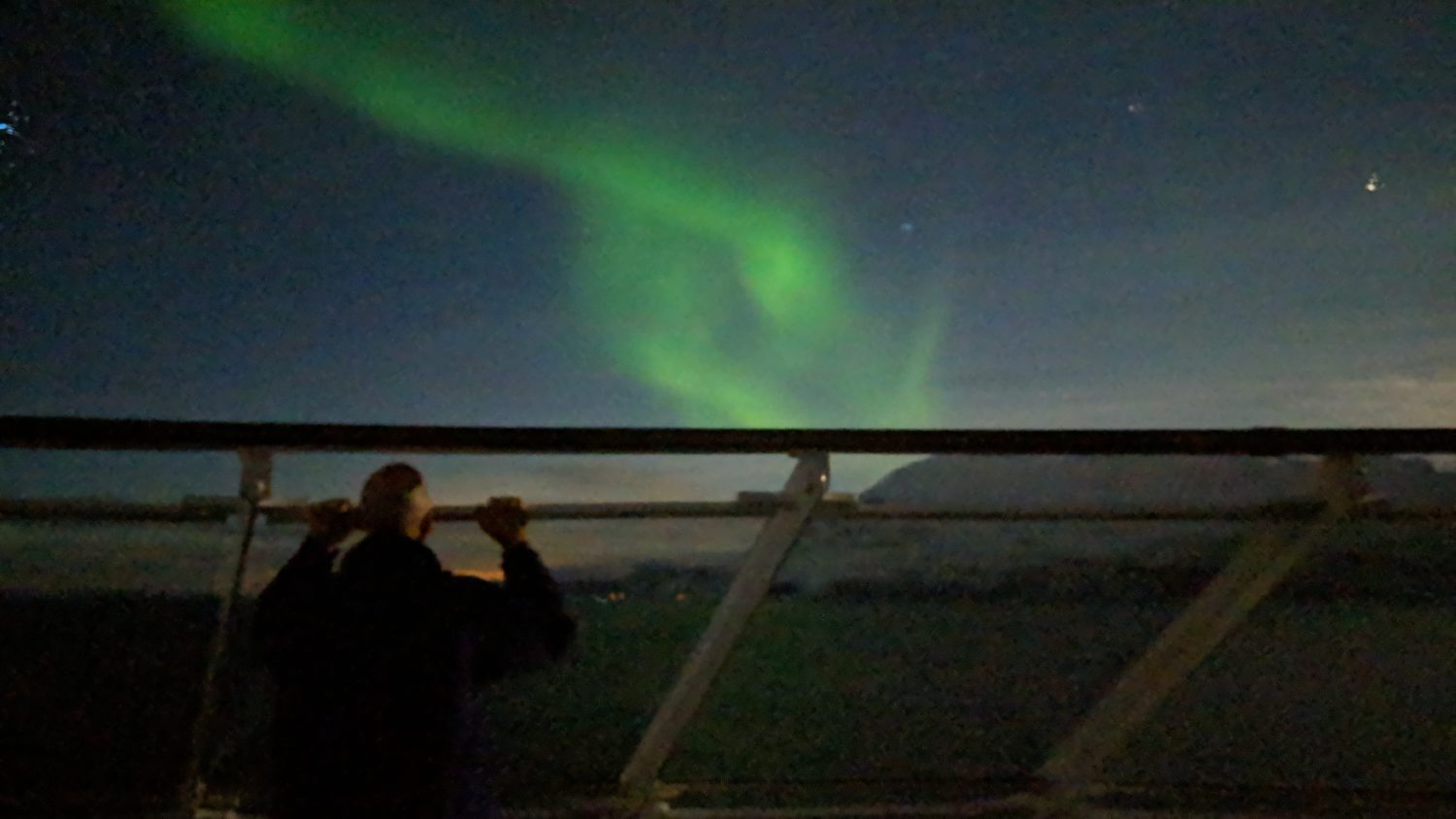 Viking had already created the popular “Viking Homelands” cruises for the Baltic and Scandinavian waters in spring and summer between Bergen, Norway, and Stockholm, Sweden.

Now, the cruise line with a rich history and connection to Norway brings cruisers another great option and a chance to get a look at the rare natural phenomenon of the Aurora Borealis, or Northern Lights, the enchanting swirling green and purple light show best viewed in the clear skies within the Arctic Circle.

We got onboard Viking Sky in Bergen for a 12-day voyage that took us to four ports in Norway on the way to Tilbury, England. Ours was the fourth sailing of the six-cruise inaugural winter season for Viking Ocean Cruises on this itinerary.

The line says that the sailings have all been sold out or close to sold out. The line will use Viking Star for these voyages next year.

We have sailed on Viking ocean ships twice in the Med and numerous times with other lines around the world, from the Caribbean to Alaska to the California coast and Panama Canal. But a cruise in the winter time that reaches into the Arctic is quite a different experience. 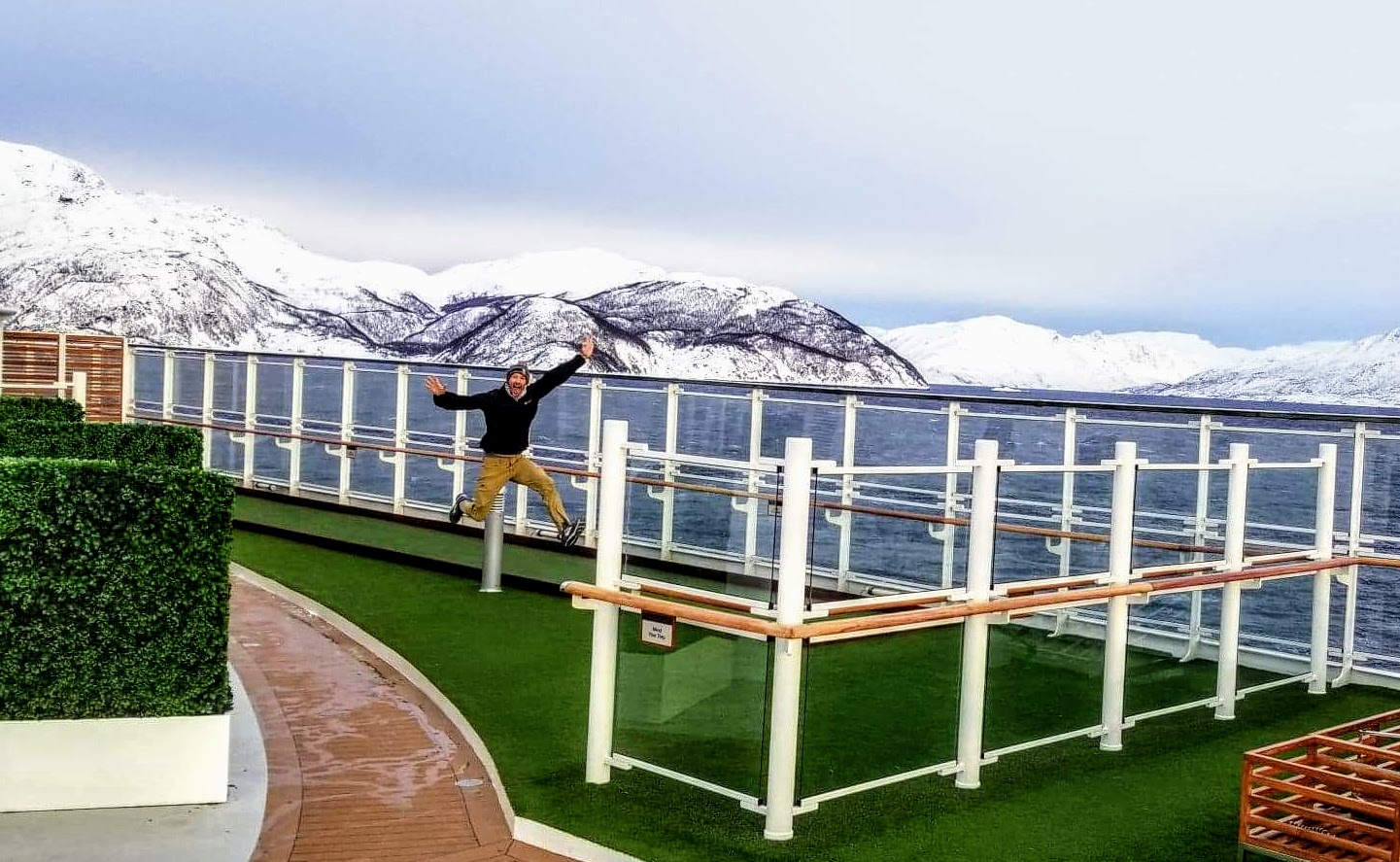 We embarked in Bergen, Norway. The ship sits in the marina right in the heart of a bustling and scenic city. Once you set sail, you’ll be right in the heart of the Norwegian fjords, with beautiful vistas all around. Snowcapped mountains and cliffs line the horizon as you sail on Norway’s western coast. Be ready with your camera at all times. The ship route passes some beautiful villages, rocky islets and quaint lighthouses. You might even spot a whale or other marine life.

Make sure you take advantage of the limited amount of daylight to get your nature and landscape shots. By the third week of February, when we sailed, we were getting about eight hours of daylight (sunrise about 9 a.m. and sunset about) 5 p.m. The first cruises, which had started sailing just over a month earlier, had much shorter days by hours.

Temps often are below freezing, especially as you venture into the Arctic Circle, so pack warm clothes. You can save a bit of packing space by planning to use the complimentary laundry rooms on Viking ships. Seas were a bit rough at times, and the conditions forced our ship to miss a planned stop at Bodo, an island village just north of the Arctic Circle.

Once in the Arctic Circle, Viking holds an “Order of the Blue Nose” ceremony marking the official crossing. Cruisers can participate and mark their brave voyage into the far north by taking a plunge in an icy bath (the hot tub is used and properly cooled down for the plunge), downing a shot of Aquavit and having their noses daubed with a bit of blue frosting. It’s a festive morning poolside party that saw about 100 brave souls in Viking Sky take the challenge.

Winter is cold in this part of Norway, indeed, but many of the activities are invigorating. It’s this time of year that you really can learn what it’s like to be a rugged native of these parts. The history and culture are intertwined with life in the harsh north. We visited with Sami people, the indigenous residents of the region, when in Narvik, and we learned about the practice of reindeer husbandry. We got a chance to interact with the animals and try some food made from reindeer both onshore and aboard the ship. In fact, many special meals were available that focused on Scandinavian cuisine, such as reindeer and lutefiske.

In Alta, we tried our hands at cross-country skiing in the countryside. In Tromso, it was cod fishing in the fjord and touring with a team of huskies at a dogsledding camp. We embraced the cold and had a blast. 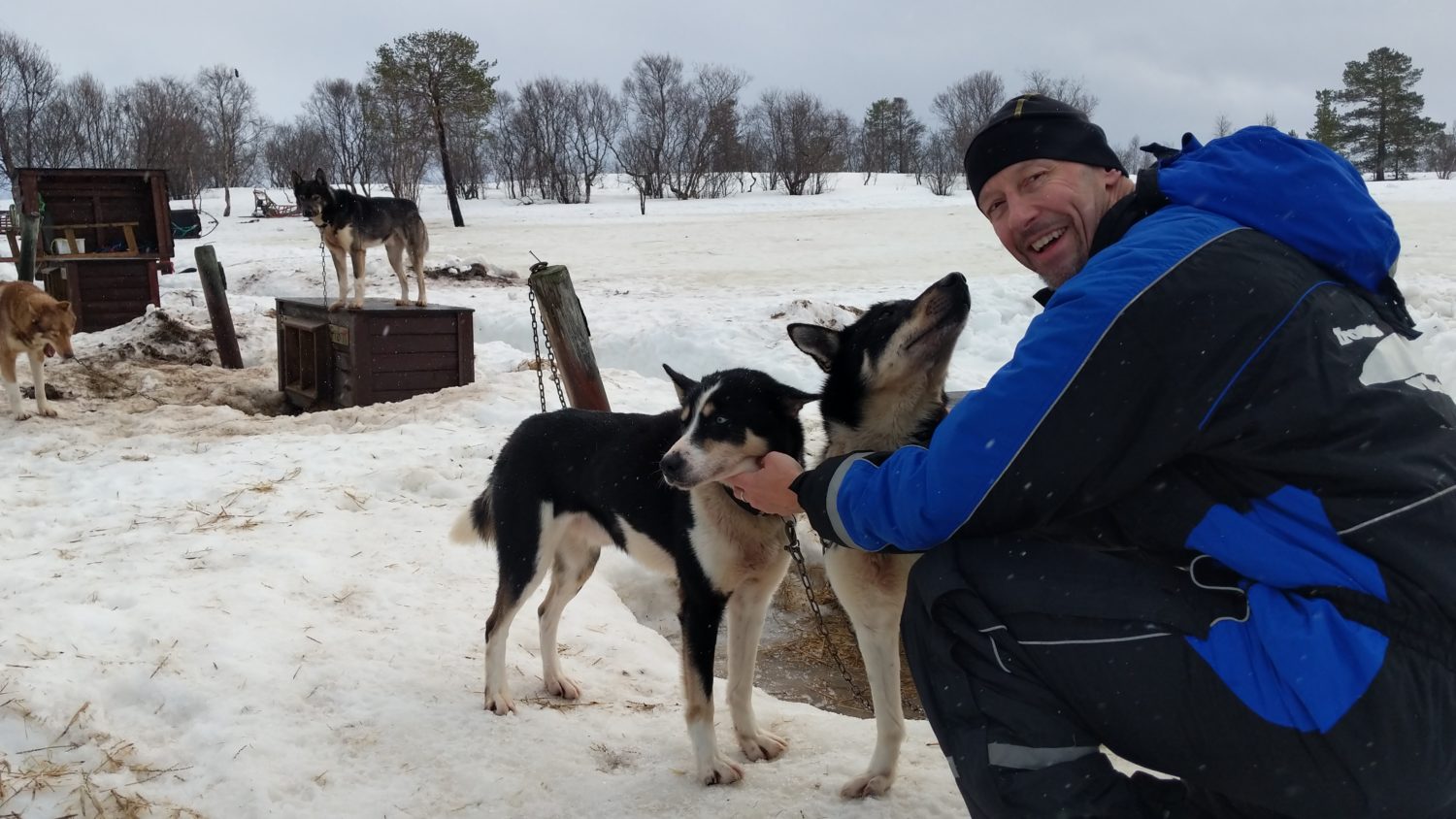 We left the Arctic Circle and arrived in Stavanger to surprising sunshine, which gave us a picture-perfect day for our cruise in Lysefjord to see Pulpit Rock.

The whole point of the cruise for most of the 930 passengers onboard Viking Sky was to get a good chance to see the Northern Lights. Viking offers night-time excursions to chase the lights with professional Aurora Borealis hunters who use technology to find the clearest skies. Several passengers reported having some success on these tours, some of which ventured all the way into Finland.

However, we were blessed with a great display on our third night onboard as the ship sailed toward Alta. Two separate shipwide announcements during dinner time, sent passengers scrambling to the top decks. Few of us made it in time to see anything, and a general sense of disappointed was felt washing over the crowd.

The mood changed around 11 p.m. when a call was made for a third time. The sky burst forth with awesome green colors on full display in a show that lasted at least 20 minutes. We could rest easy knowing that we had enjoyed a good sighting. From that point on, we would consider anything else (there were a couple of small sightings later by some passengers) to be a bonus. 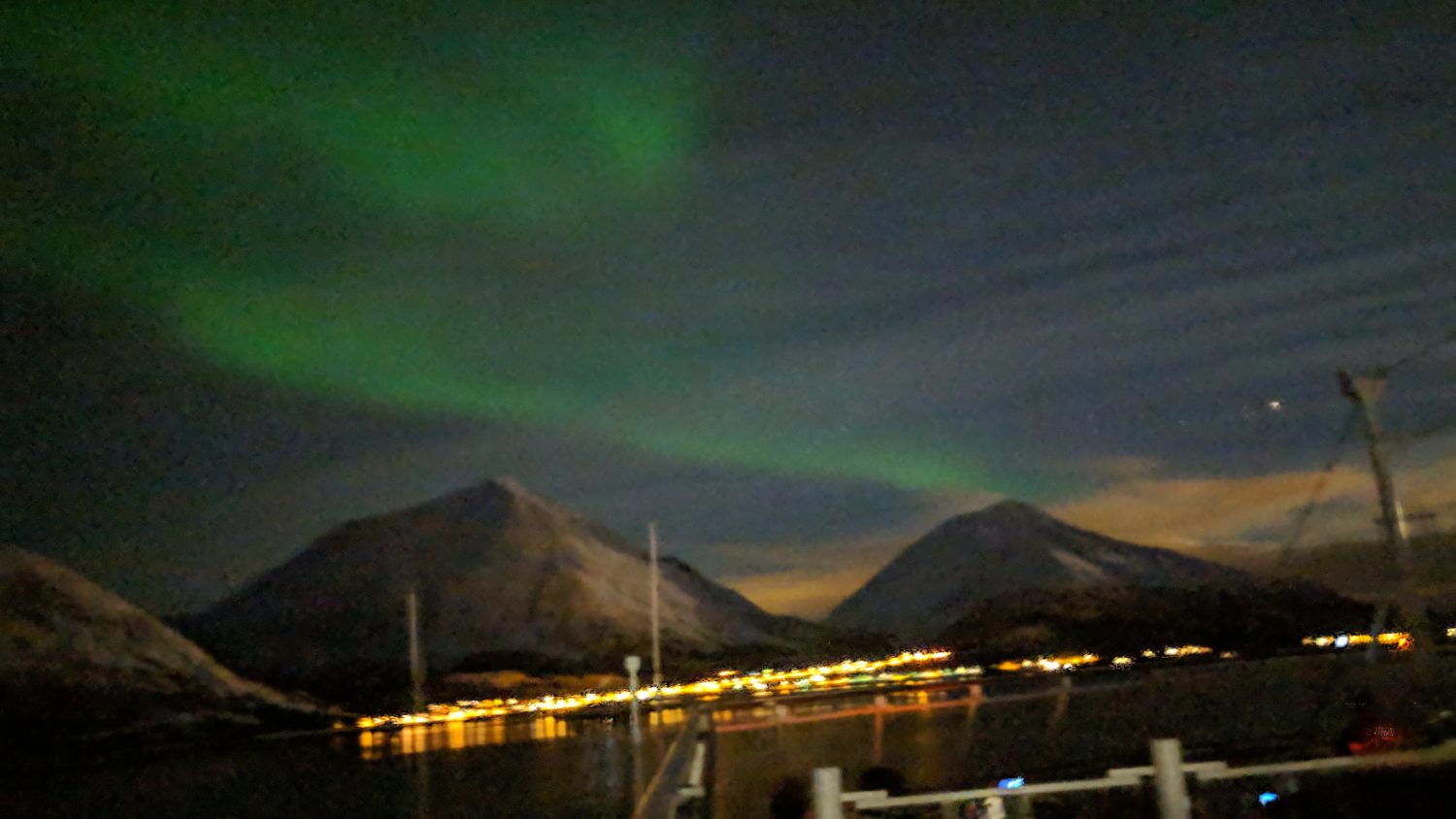 We also were among the few who braved the infinity pool and hot tub outside at the ship’s Aquavit Terrace. (Few passengers use the enclosed main pool or hot tub, either.) It was a fabulous experience to see the impressive sights of the fjord or the sunsets as we sailed away from the quaint port area at Stavanger while sipping sparkling wine or a beer. Yes, crew reward you with a drink as soon as you dip into the waters back there. They also are at the ready with warm towels when you finally get out and face the cold air when you’re done with your soak or swim. 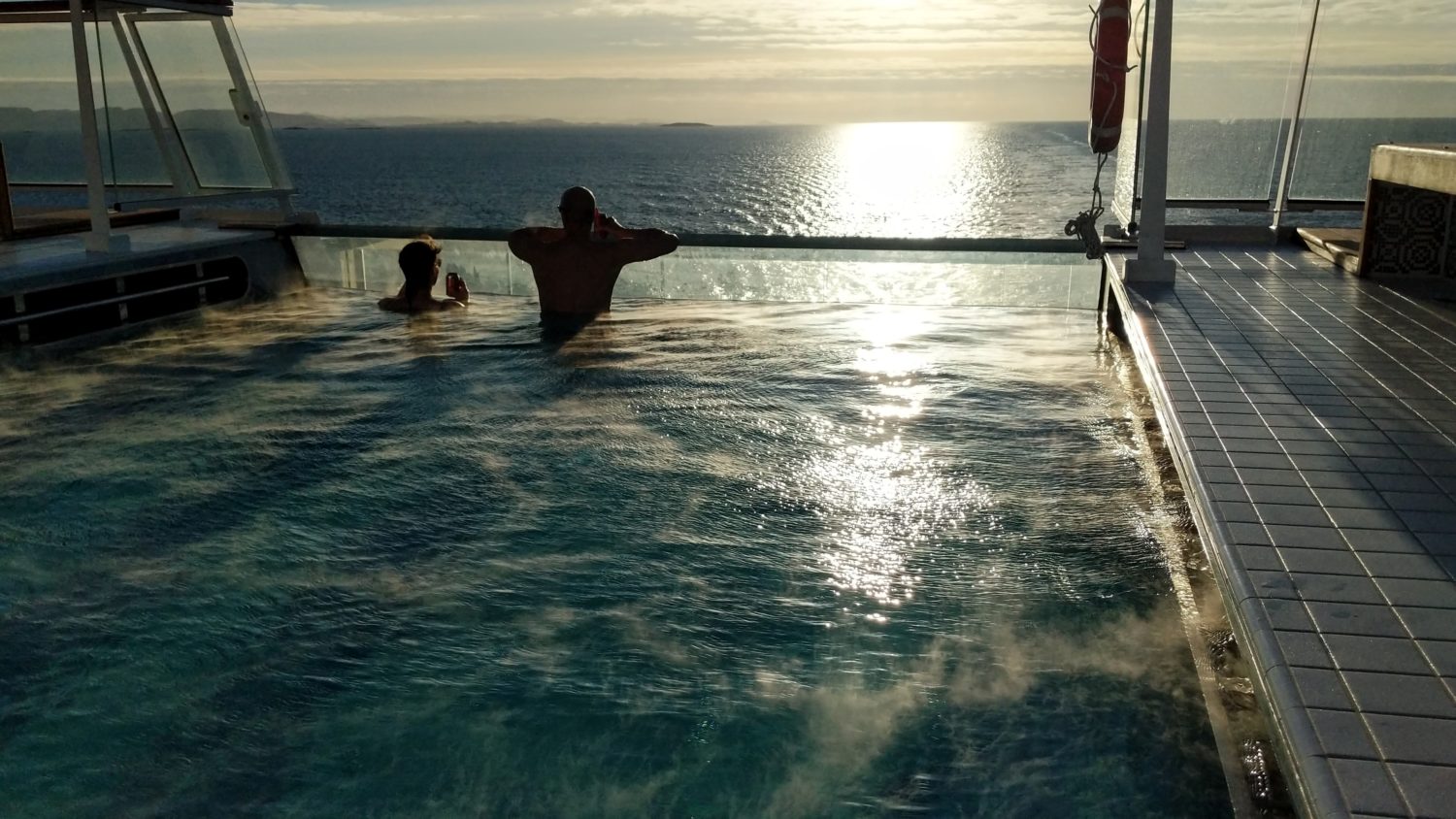 Beyond the 2020 “Search for the Northern Lights” cruises, I would expect Viking Ocean Cruises to strongly consider using one if the new ships, Viking Orion or Viking Jupiter, on these voyages to take advantage of the vessels’ onboard planetariums, resident astronomers and high-powered telescopes, which seem a perfect fit for hunting the Northern Lights.

John Robertshttps://InTheLoopTravel.com
John Roberts is a freelance writer and operator of InTheLoopTravel.com. He writes about cruising and active travel, highlighting how people can connect with the world and other cultures through rewarding travel experiences.
Opinion Viking Cruises' "In Search of the Northern Lights" Voyages: How They're Different
Previous articleRoyal Caribbean Changes Deployment Reveal Schedule for Cruises in 2020-2021
Next articleSneak Peek at the World Class Cruise Ships from MSC Cruises