Thoughts on Taking a Cruise on Carnival Sunshine

Carnival Cruise Line’s Carnival Sunshine went through a Fun Ship 2.0 refurbishment in 2013 when her name was changed from Destiny to Sunshine.  Ever since then I’ve been wanting to sail on this ship and I finally had my chance so I jumped at the opportunity.

And to make it even better, Carnival Sunshine was sailing out of Charleston, SC which made it only a short drive from my home in NC.  In this post I will walk through the ship and let you know my thoughts on this 4 day sailing from the Palmetto state.

Port Charleston is not exactly built for larger cruise ships, and Carnival Sunshine was the first ship over 100,000 gross tons.   The previous cruise passengers were delayed in getting off the ship, so the embarkation process was lethargic.  Most of it was spent in the car, just trying to get into the cruise terminal parking area, and then weaving around cones in very slow moving lines.  In fact, even though we were less than 1 mile from the port, it was almost 2 hours before we were able to get out of the car.  Later we were told that the reason for this delay was the customs process.  One perk in this embarkation process, however, was that the porters took the luggage out of our trunk without us having to lift a finger, except to push the trunk button and grab a few dollars for a tip.   From the parking area we jumped on a shuttle bus and waited a little more, although in retrospect it would have been quicker just to walk to the terminal.    Once in the terminal the line moved fairly quickly and the agents were cheery and helpful.

Check out our video tour of Carnival Sunshine to see it for yourself:

As soon as I got on the ship I headed for the spa.  I usually do this to try to get some video of the spa before anyone is actually using it.  One cool feature of Sunshine is the updated thermal suite area.  With the thermal suite package you get access to the heated tile loungers which face the ocean, lovely scented showers, 2 steam rooms, and a laconium which is a medium temperature dry sauna with a lovely aroma.  Keep in mind that both the men’s and women’s locker rooms have dry suanas as well at no extra charge.   Since we had a spa balcony stateroom we have full access to the thermal suite for the duration of the cruise. 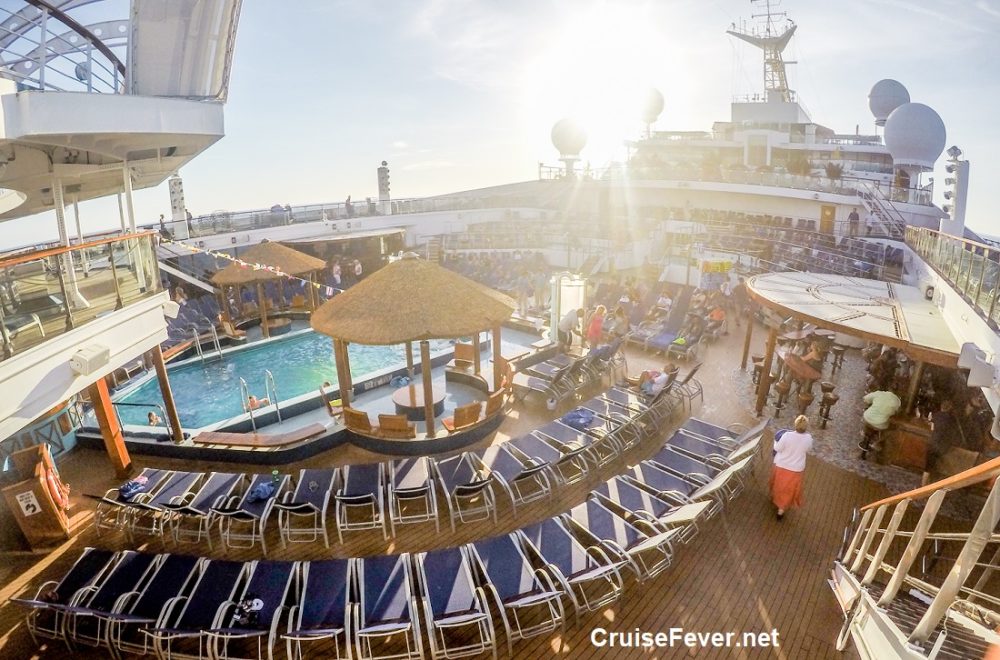 After having been on other Fun 2.0 Carnival ships the Sunshine’s lido deck definitely felt familiar.  There was Guy’s Burger Joint and BlueIguana Cantina on either side of the main pool, and 24/7 ice cream or frozen yogurt as well.

The main complaint I heard on this ship was the lack of pool space.  There is really only one main pool for the kids to swim in, and it was usually packed to the gills.  The only other pool is in the Serenity area, which was only serene on a port day when most passengers were exploring the wonders of Nassau.   Both of these pools are on the small side, but the Serenity pool is beautiful with a waterfall to drown out some background noise, and comfy loungers all around it.

There are 3 hot tubs on Sunshine.  One is right above the Serenity pool and in front of the bar, and the other two are closer to the main pool just a few feet from each other.    Since the kids didn’t have much of a pool to play in they were usually hanging out in these hot tubs.

At night the main feature of lido deck is the large screen above the main pool that played movies like Trolls, Moana, Jason Bourne, and La La Land.  Don’t forget to grab some popcorn from BlueIguana Cantina before the movie starts.

I really enjoyed this part of the ship.  Maybe it’s the kid in me or maybe playing shuffleboard and ping pong at sea is just better.  The basketball court on Sunshine is a bit small, but stayed active on sea days.  All around the court are games like chess, checkers, foosball (One foosball table allowed 4 on 4 on an extra long table), pool, twister, ping pong and shuffleboard.  One flight of stairs above all that is a 9 hole mini golf course.  Hang on to your hat.  It’s windy up there.

The Sky track offers some great views from this rope’s course like walkway, another addition in the Fun 2.0 upgrade.

We waited until the ship was in port in Nassau to try out the waterpark.  There were literally no lines whatsoever, so my wife and I went down the waterslides about 7 or 8 times in a row with zero waiting.   There are three waterslides in total.  Two of them allow you to race against someone else and man do these things move.  My wife beat me every single time, but it was a blast and a great way to cool off.  The Twister waterslide is a little slower but has more twists and turns as the name suggests.

For the little ones there are little water slides and a little water park with squirt guns and sprinklers to play in.  Orange loungers line this entire area so you can keep an eye on your child while you soak in some sun. 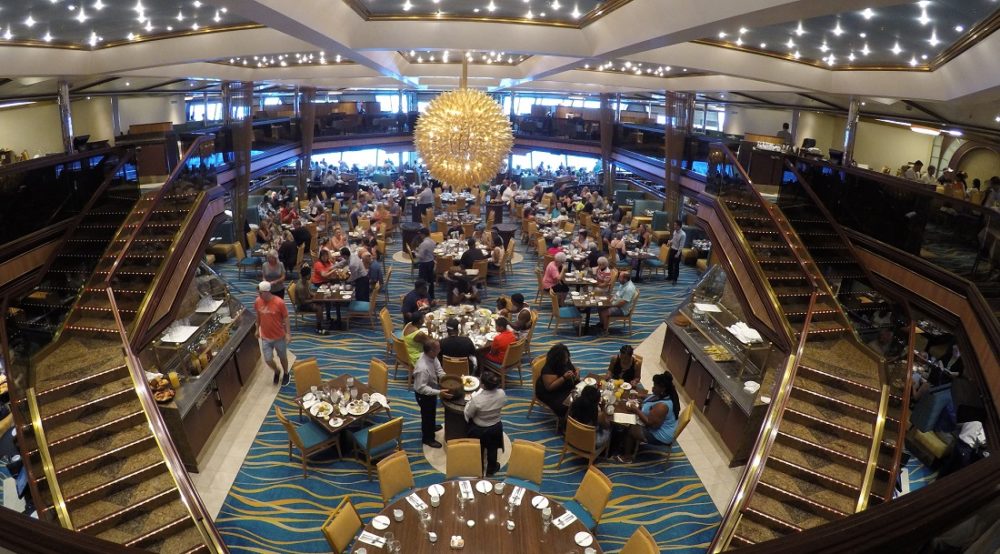 Although there are only 4 specialty dining options on Sunshine there was plenty of variety to keep my pallet guessing.  The 4 specialty restaurants are Bonsai Sushi, Fahrenheit 555, Ji Ji Asian Kitchen, and my personal favorite Cucina del Capitano.  During lunch hours you can sample Cucina del Capitano for free.  You simple fill out a paper with your desired pasta type, sauce, toppings, and side dish and in a few minutes you have a hot fresh Italian dish.

We chose Your Time Dining as it allowed us to eat sooner and have the rest of the night to explore the happenings of the ship.  By arriving at the check-in desk at 5:15pm we were able to get a table for 2 each time, and this still allowed for interaction with other cruisers as the tables were only a few inches apart.  For each meal the ship was smooth as can be.  Sitting in the aft part of the ship can be rough on a cruise ship sometimes, but I was amazed at how subtle movement was.

As usual on a Carnival ship the food in the main dining room was excellent.  I always enjoy a good steak and my wife is obsessed with the chocolate melting cake.  The servers at our table did an extraordinary job and we had no complaints there.

The buffet was fairly standard and offered similar food choices each day.  The always popular Pizzeria del Capitano was a favorite choice on several occasions, and knowing fresh pizza is being made 24/7 makes this a great choice at all hours of the day.

A great place to get away from the hustle and bustle of the buffet area is back near the Havana Bar.  Not only do you have great views of the water but it’s much quieter.  You just have to get your food and keep walking as far back as you can on the ship to find this little sanctuary.

And how can I forget Carnival’s Chocolate Extravaganza!

There were always fun things to do around the ship, and one thing I was excited about was the Punchliner Comedy Club.  But to my surprise there was only one show on the first night that offered a PG rated comedy show.  Every comedy show after that was rated 18+, so keep that in mind if you plan on cruising with children.

I’m not much of a “song and dance” kind of person when it comes to entertainment but I know some cruisers are into that.  In Liquid Lounge (the main auditorium) there were shows like “Epic Rock”, and a tribute to 80’s music.

Live music is always taking place somewhere on the ship if you just want to grab a slice of pizza and relax a little.  My wife and I found some fun games in the library (I know we cruise like old people) and enjoyed the variety of games they had and the quiet space the library provided.

We also somehow ended up in a larger than life game of Jenga which Carnival calls Carnival Tower if you see that in the Fun Times.  And yes, I took home a ship on a stick to add to my collection.

The Warehouse Arcade is on Deck 5 forward and was surprisingly large for this ship.   I always challenge my wife to at least 1 or 3 air hockey matches and she always wins, but it’s kind of our tradition (us playing not her winning).  The air hockey table on this ship, however, is a little different.  All at once about 30 hockey pucks came streaming onto the table, making things a bit more dramatic.

Our cruise director, Leigh, did an awesome job and I heard a lot of people who were happy with his skills to provide the thrills while on board.

There were a few perks that came with booking a spa cabin.  Not only did we get unlimited access to the thermal suite in Cloud 9 spa, but we also received some top grade shampoo and shower gel, and 2 complimentary fitness classes.  The stateroom also allowed us to get bigger discounts on any spa treatments like massages, facials, etc.

One thing to keep in mind is that Carnival now gives you the option to have your cabin cleaned only once in a day rather than twice.  We did not realize this and there might have been some miscommunication because our room was only cleaned in the evenings.

Overall Carnival Sunshine is a great ship that offers a lot for its size.  I enjoyed the Cloud 9 spa and Waterworks park, and the adult only Serenity area was very spacious.  The lack of pool space made things seem a little cramped, but this was an itinerary with only one day in port so loungers around both pools were at a premium.  As the saying goes, the early bird gets the towel placed on the lounger.

J. Souza
Jon got hooked on cruising after his first cruise on his honeymoon, and today he is always looking for cruise deals and reading information about the cruise industry. Jon lives in the foothills of North Carolina and wishes there were a cruise port that far inland. Jon can be reached at [email protected]
ShipsCarnivalThoughts on Taking a Cruise on Carnival Sunshine
Previous article
Cruises to Cuba Will Continue After Policy Changes
Next article
Walking Dead Cruise Announced for 2018