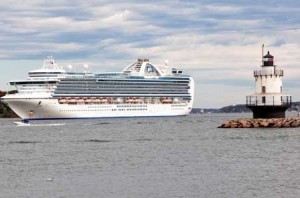 Celebrity cruises has agreed to buy at least 2 tons of lobster when one of its ships visits Bar Harbor and Portland, Maine this fall.

“Getting these cruise ship companies to buy lobster when they are in port is good for lobstermen and makes sure that more passengers get to sample the best lobster in the world,” Pingree said in a statement.

Earlier this month, the Holland America cruise line agreed to buy locally caught lobsters for its ships when they visit Bar Harbor, Maine as well.

But before you think that cruise lines are doing this out of the goodness of their hearts…  there is a reason for this push to sell more lobster.

The harvest of lobsters this year in Maine has been above average and lobsters are being purchased at very low prices due to an oversupply.  This has been a win for both the local Maine fishermen and the cruise industry, especially considering that Maine is famous for its lobster and cruise passengers should benefit the most from getting to eat this delicious entrée.

J. Souza
Jon got hooked on cruising after his first cruise on his honeymoon, and today he is always looking for cruise deals and reading information about the cruise industry. Jon lives in the foothills of North Carolina and wishes there were a cruise port that far inland. Jon can be reached at [email protected]
Cruise NewsCelebrity Cruise Lines Agrees to Buy Maine Lobster While in Port
Previous article
Tropical Storm Isaac Threatens Cruise Ships in the Caribbean
Next article
Norwegian Cruise Line Rolls Out Signature Trio Dining Package