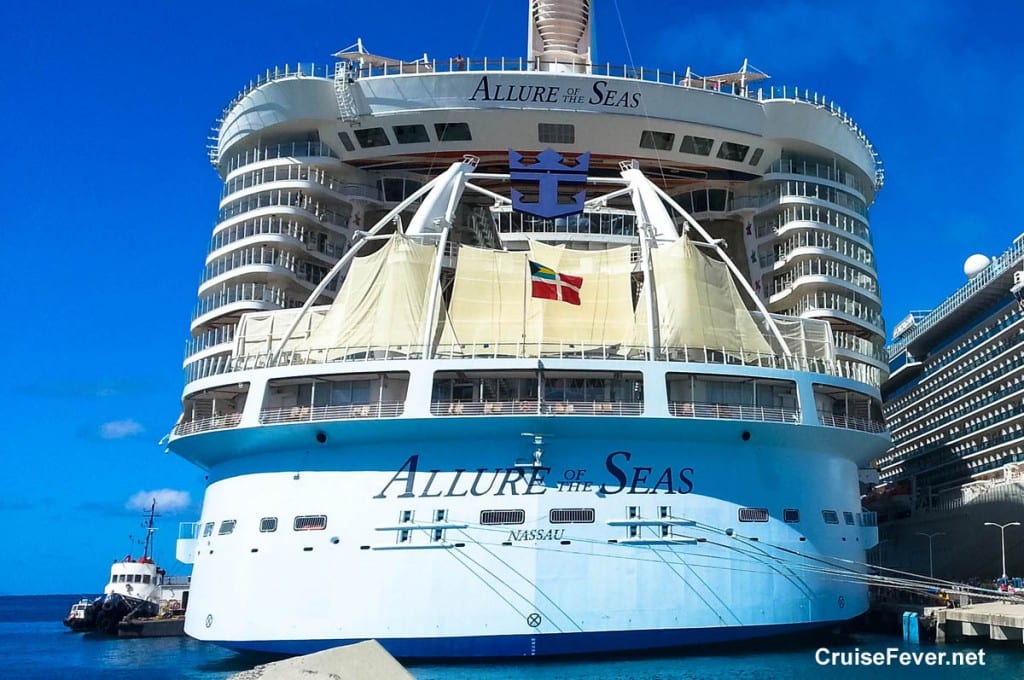 Cruise ships are measured by gross tonnage which is a figure calculated from the total enclosed volume of the ship.  For a good comparison of how large today’s cruise ships are, the Titanic was an estimated 46,000 gross tons in size.

1. Harmony of the Seas: The largest cruise ship in the world made her debut this past week and comes in at 226,963 gross tons. Royal Caribbean’s newest ship carries up to 6,360 passengers in 2,747 staterooms and is one foot longer than her sister ships, Allure of the Seas and Oasis of the Seas.

2. Allure of the Seas: The 2nd largest cruise ship in the world is Royal Caribbean’s Allure of the Seas coming in at 225,282 gross tons.  Allure went into service in 2010 and held the title as world’s biggest ship until this past week. The ship is 1,187 feet long and is able to hold over 6,000 passengers.

10 (tie). Freedom of the Seas/Independence of the Seas:  The two Freedom Class ships from Royal Caribbean are tied for the 10th spot and come in at 154,407 gross tons.  Freedom of the Seas was the largest cruise ship in the world when she was completed in 2006.  The ships are 1,112 feet long and can carry up to 4,375 passengers.

Although Carnival Cruise Line has the most cruise ships out of all the cruise lines at 25 (tied with Royal Caribbean), they do not have any cruise ships in the top 25 in size.  They were however the first cruise line to build a ship (Carnival Destiny, now the Carnival Sunshine) over 100,000 gross tons in 1996.

Ben Souza
Ben is a world traveler who has visited 40+ countries and taken over 70 cruises. His writings have appeared and been cited in various media outlets such as Yahoo News, MSN, NPR, Drudge Report, CNN, Fox, and ABC News. Ben currently resides in Cincinnati, Ohio. Follow Ben on Instagram. Visit Ben Souza on Linkedin. You may email Ben at [email protected]
Cruise FactsTop 10 Largest Cruise Ships in the World
Previous article
Royal Caribbean Eyeing Cruises to Cuba By Late Summer
Next article
Disney Cruise Line Returning to Galveston, New York, and California in 2017