Even though cruise ships are immense in size, it’s amazing how fast they can travel.  So how fast are cruise ships?   The average speed for cruise ships today is anywhere from 20-24 knots.  This speed translates into around 23 mph – 27 mph. 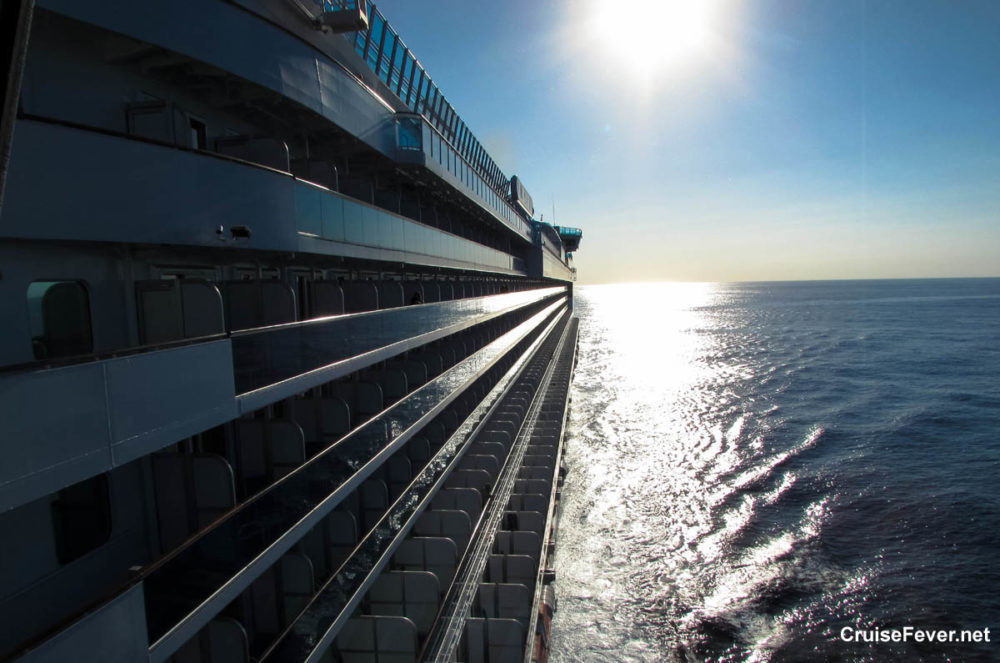 How does “knots” translate into mph?  You can simple multiply the knots figure by 1.15 to figure out how fast that is in miles per hour.  Knot is a nautical term, a unit of speed.  It is equal to one nautical mile per hour.

“Cruising speed” is the speed at which most cruise ships travel on open seas.  It is sometimes referred to as service speed.  It is not the maximum speed but a rate at which the ship will offer a comfortable ride, using the least amount of fuel for the distance traveled.  If a cruise ship traveled with “the pedal to the medal”  it would not only give the passengers a rough sailing, but it would also use much more fuel than necessary.

Here is the cruising speed of some popular cruise ships:

Fastest Cruise Ship in the World

So what is the fastest cruise ship in the world?  Well it really depends what class of cruise ship you are talking about.  The 25,000 ton Olympia Voyager (aka Costa Voyager, Voyager, and Grand Voyager and now owned by Bohai Ferry Company) can travel as fast as 27 knots or 31 miles per hour.  But 25,000 tons is very small by the standards of today’s cruise ships, and the Voyager is really an ocean liner and not a cruise ship.

The Queen Mary 2 holds the title of fastest cruise ship in the world with speeds of 30 knots.  That’s over 34 miles per hour.  This is a phenomenal speed considering the ship is close to 150,000 gross tons in size .  This incredible speed allows Cunard to offer 7 day transatlantic cruises between Southampton and New York on Queen Mary 2.  No other vessel this size can cross the Atlantic as fast as Queen Mary 2. 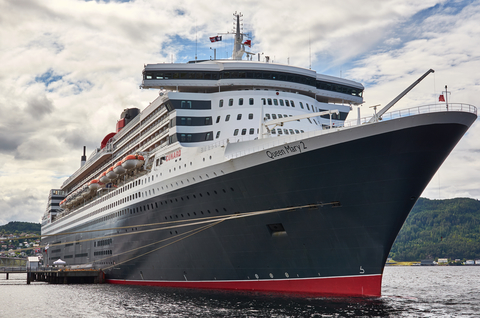 Royal Caribbean’s Radiance Class ships are quite speedy as well, being able to travel at speeds of 25 knots or 28 mph.

But just because these cruise ships CAN travel that fast doesn’t mean they ever do.  Usually the cruising speed of one of these massive ships is around 18-22 knots.  So when you ask, “How fast do cruise ships go?” you have to consider that these ships aren’t out there racing each other.  They are more concerned with luxury than speed.

MS Chinese Taishan, formerly known as Grand Voyager and Costa Voyager, has a blazing top speed of 28 knots.   The ship currently sails in Asia, but in 2005 a freak 40 foot wave in the Mediterranean broke through a window on the bridge and did some damage to the ship’s engine controls.  In 2014 the vessel was sold to Bohai Ferry Company for $43 million dollars.    Chinese Taishan is only a 24,427 ton vessel with a maximum capacity of 927.

Built in 1995, MV Oriana was the first new ship commissioned for P&O Cruises.  This vessel hit 26.2 knots in sea trials and is considered the 3rd fastest cruise ship in the world.   The ship is 69,153 tons with a maximum capacity of 1,928.

When Do Cruise Ships Travel at Top Speed?

If there is a storm at sea a cruise ship will have to go a little faster to get around it or to get away from it.  In these cases it’s worth giving the passengers a bumpy ride to avoid an even bumpier one if the ship ran into the storm.

In cases of emergency a cruise ship may travel at top speeds as well.  For instance, if a distress call comes in and the ship needs to assist another vessel a captain will use the ship’s full resources to lend aid as quickly as possible.

The reason these ships don’t typically travel at higher speeds is that the resistance of the ship beneath the waves would be counterproductive in terms of fuel cost.  If they wanted, they could design these cruise ships to come out of the water more, but then it would cause a bumpy ride for the passengers.  By allowing the hull to be more submerged it allows for a smoother ride on the high seas. Even when traveling at 24 knots, you barely feel the ship is even moving.

J. Souza
Jon got hooked on cruising after his first cruise on his honeymoon, and today he is always looking for cruise deals and reading information about the cruise industry. Jon lives in the foothills of North Carolina and wishes there were a cruise port that far inland. Jon can be reached at [email protected]
Cruise FactsHow Fast Do Cruise Ships Go? | Cruise Ship Travel Speed
Previous article
Getting To Your Cruise Ship: Make Flying Fun With These Tips
Next article
Port of Seattle Cruise Terminal Info, What You Need to Know