First Impressions of Royal Caribbean’s Voyager of the Seas

We are on the second day of our cruise on Royal Caribbean’s Voyager of the Seas, the largest cruise ship built in the 20th Century. 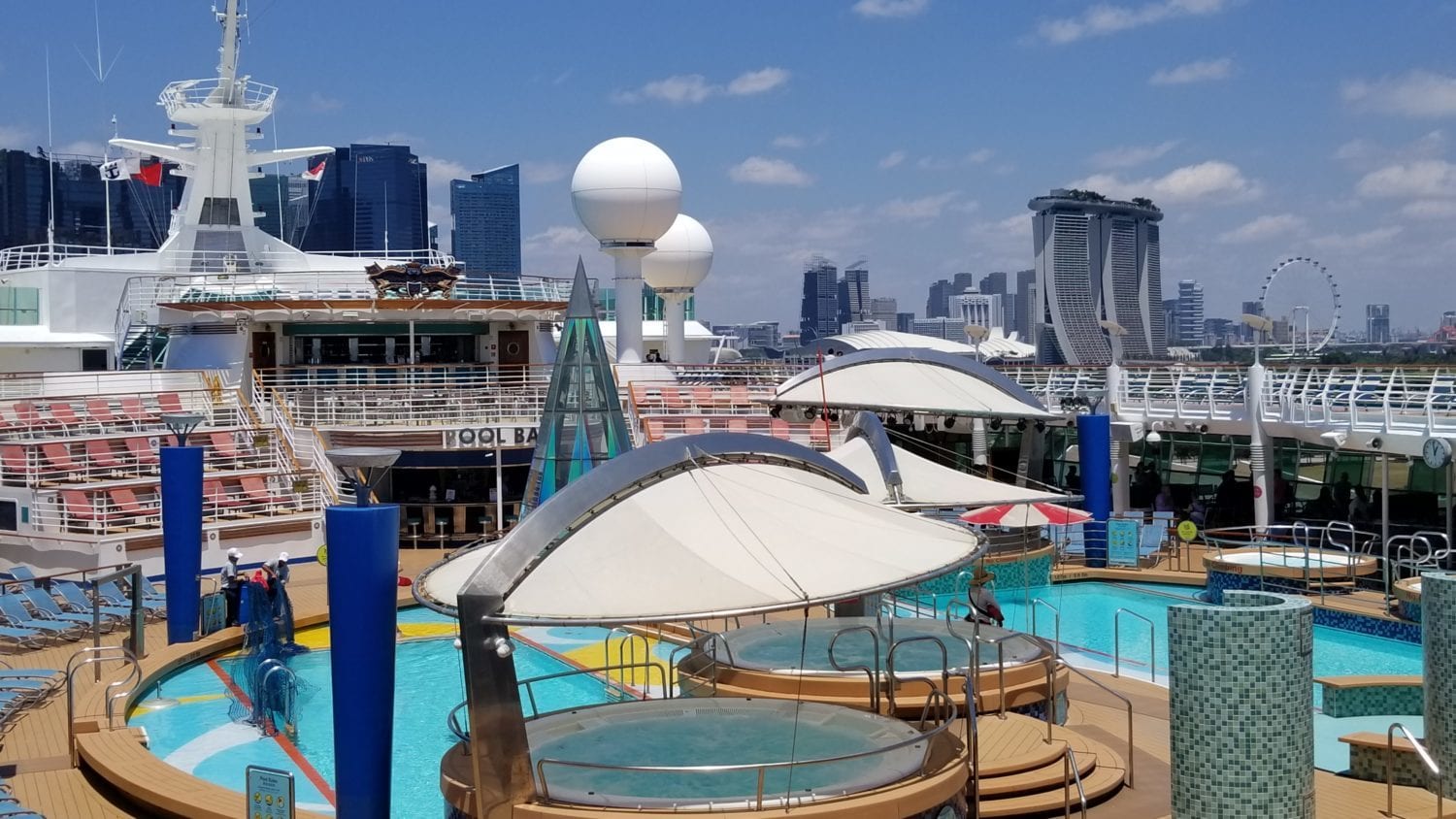 The cruise departed from the great city of Singapore with stops in Kuala Lumpur, Malaysia and Phuket, Thailand. If you have never taken a cruise out of Singapore, you really need to.  (However, that is an article that will be published soon.) After a little over 24 hours on board, what do we think of this cruise ship?  Here are my 100% unbiased first impressions of Voyager of the Seas.

Embarkation: Embarkation couldn’t have gone any smoother.  This is my first time cruising out of Singapore and wasn’t sure what to expect.  We arrived at the cruise port around noon and never had to wait in one line.  The only time that we had to wait was at each counter when they were processing our check-in, photocopying out passports etc.

After checking in, we walked right on the ship.  We went from curb to ship in under 15 minutes. It couldn’t have gone any smoother or faster.  There are a few extra steps you have to go through when checking in since the cruise is out of Singapore.  For instance, they collect your passport right before you board the ship and you get it back on the last night of the cruise.

Ship: Voyager of the Seas went into service in 1999 and I’ll be completely honest.  The ship is in need of refurbishment. While it’s a great ship, it doesn’t have the WOW factor that I’ve felt on my previous five Royal Caribbean cruises. The public areas are worn and tired. The sink in our bathroom doesn’t drain well and the water for showers is lukewarm at best (borderline cold). There’s also quite a bit of rust around our balcony door.

The good news is that the ship is scheduled for a five week dry dock starting in September. The cruise ship will receive a massive makeover and should bring it up to par with the rest of the Royal Caribbean fleet.

One thing that I love about Voyager of the Seas is all of the deck space.  The loungers by the pool are never full and you can always find one wherever you want to lay out in the sun. So far on this cruise, I’ve never seen more than 40% of the loungers taken. And in case you are wondering how full the ship is, there are a little more than 3,500 passengers on board. 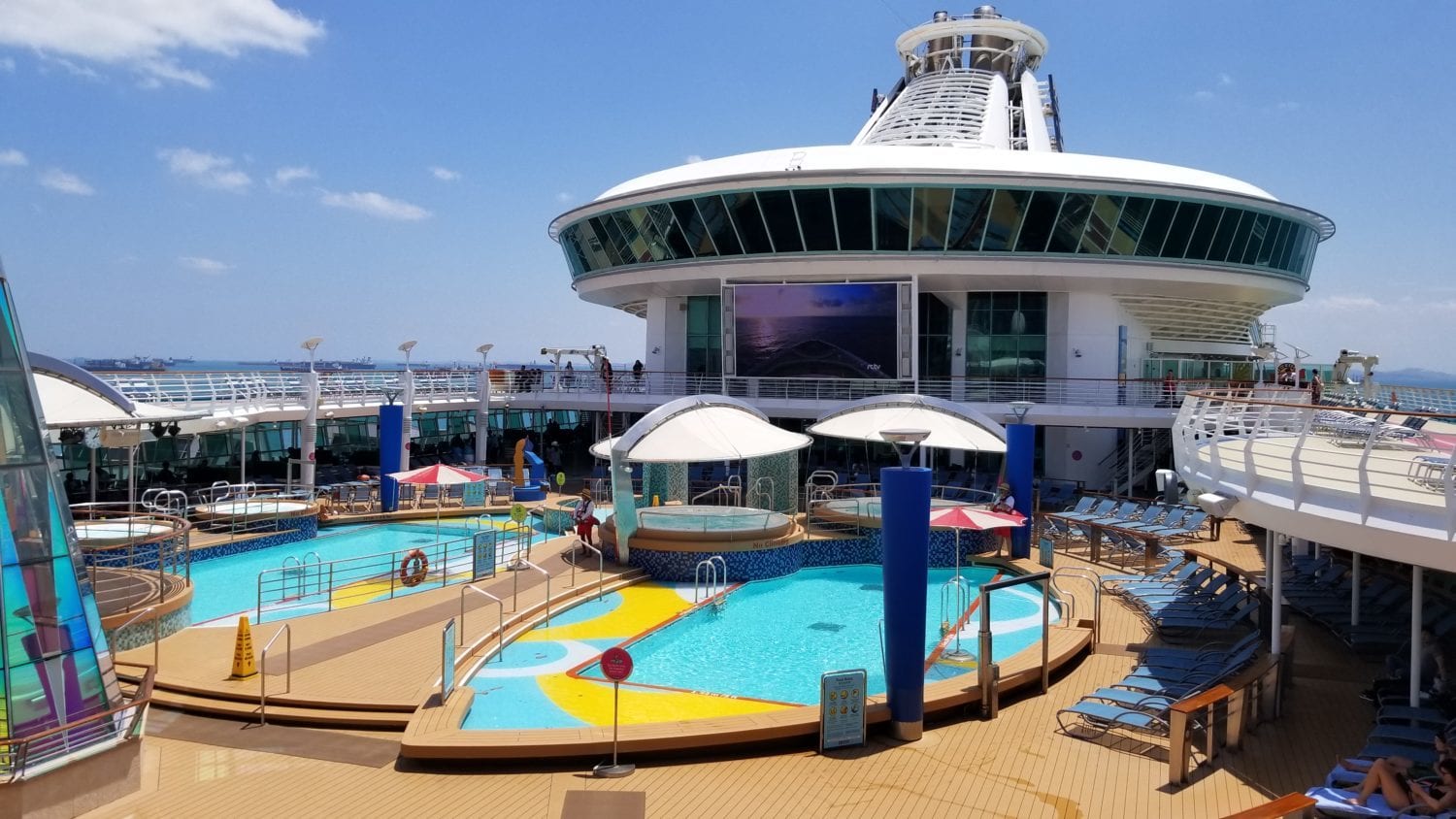 Crew: The crew onboard Voyager of the Seas is as friendly as you’ll find at sea.  Our room steward Eko has done an excellent job cleaning our cabin. He stopped by the first day to introduce himself and to ask if we needed anything.  He also always greets us with a friendly smile in the hallway. From the servers at dinners to all of the staff members we have had contact with, they’ve all done an excellent job.

View Prices on Cruises on Voyager of the Seas

Cabin: I booked a guarantee balcony stateroom as I didn’t feel it was worth it to spend an additional $500 to choose my stateroom. (Especially since we only paid $1,100 total for two including taxes and port fees.)  We were assigned 6592 and it seems like a great location.  We are located above the shops so we don’t have to worry about noise late at night.

It’s pretty much your standard balcony cabin on a cruise ship. I was glad to see we have shower doors and not those crappy shower curtains that stick to you while showering that are found on older ships.

Excursions: We took that $500 we saved by booking a guarantee stateroom and used it for excursions.  Since both ports are far away from everything, I did something I rarely do and booked directly through Royal Caribbean.

Our first excursion was to the Batu Caves and City Experience in Kuala Lumpur.  I can honestly say that it was one of the best tours I’ve ever taken on a cruise.  I’d rank it up there with excursions I’ve taken with premium cruise lines.  If you are ever taking a Royal Caribbean cruise on this itinerary, I highly recommend it.

The tour includes lunch since it is around 7 hours long.  I wasn’t expecting much for lunch but it ended up being incredible.  We had a really nice buffet lunch at a revolving restaurant overlooking the skyline of KL.  The view was nothing short of spectacular since the restaurant is around 800 feet in the air.

Cultural Cruise: Since the cruise is out of Singapore, the nationalities onboard are far more diverse than cruises to the Caribbean, Europe, or Alaska. It’s a culturally enriching cruise and I love it.  It’s a melting pot onboard and I am enjoying every minute of it.

When I booked, a warning popped up on my screen saying it was a “Culturally Enriching Cruise” and there would be diverse nationalities onboard.  I don’t look at it as a warning, but rather a bonus.  I travel to experience new cultures and try new things.

View Prices on Cruises on Voyager of the Seas

Odds and Ends: Unfortunately, the Royal Caribbean app does not work yet on Voyager of the Seas. I didn’t realize how much I relied on a cruise app until you cruise on a ship where it’s not available.

When the Windjammer is closed, there isn’t anywhere to get something to drink on the pool deck unless you buy a drink at the bar.  After the muster drill, we went up to the pool deck for sailaway and my wife was dying for water since the heat index was 105 and the muster drill was outside.  The only place on the ship where you could get water was in Cafe Promenade on Deck 5. It was obviously mobbed and took 20 minutes just to get a glass of water.

There really needs to be a drink station outside of Windjammer, especially since the ship is based in Singapore which is one degree north of the equator. I cruised on Jewel of the Seas this past summer and they always had drink stations out when Windjammer is closed.

The dining packages continues to be a great deal.  I love dining in specialty restaurants on cruises and so far we’ve dined at Chopps and Izumi.  Both were fantastic!

Tonight show featured Zlwin Chew, Asia’s foremost magician.  It was a great show, one of the best entertainers and magicians I’ve seen on a cruise.

I will have more on my cruise on Voyager of the Seas when I return home.  So far it’s been a good cruise and we’re looking forward to visiting Phuket, Thailand tomorrow. We are visiting an elephant sanctuary in the jungle and it looks like it will be an awesome excursion.

Ben Souza
Ben is a world traveler who has visited 40+ countries and taken over 70 cruises. His writings have appeared and been cited in various media outlets such as Yahoo News, MSN, NPR, Drudge Report, CNN, Fox, and ABC News. Ben currently resides in Cincinnati, Ohio. Follow Ben on Instagram. Visit Ben Souza on Linkedin. You may email Ben at [email protected]
ShipsRoyal CaribbeanFirst Impressions of Royal Caribbean's Voyager of the Seas
Previous article
4 New Cruise Lines Will Begin Offering Cruises in the Next 2 Years
Next article
Carnival Cruise Ship Provides Aid for Ship in Distress