Spectrum of the Seas is Royal Caribbean’s first Quantum Ultra class cruise ship. The ship debuted just a few weeks ago and I hopped on for a three night roundtrip cruise out of Singapore. 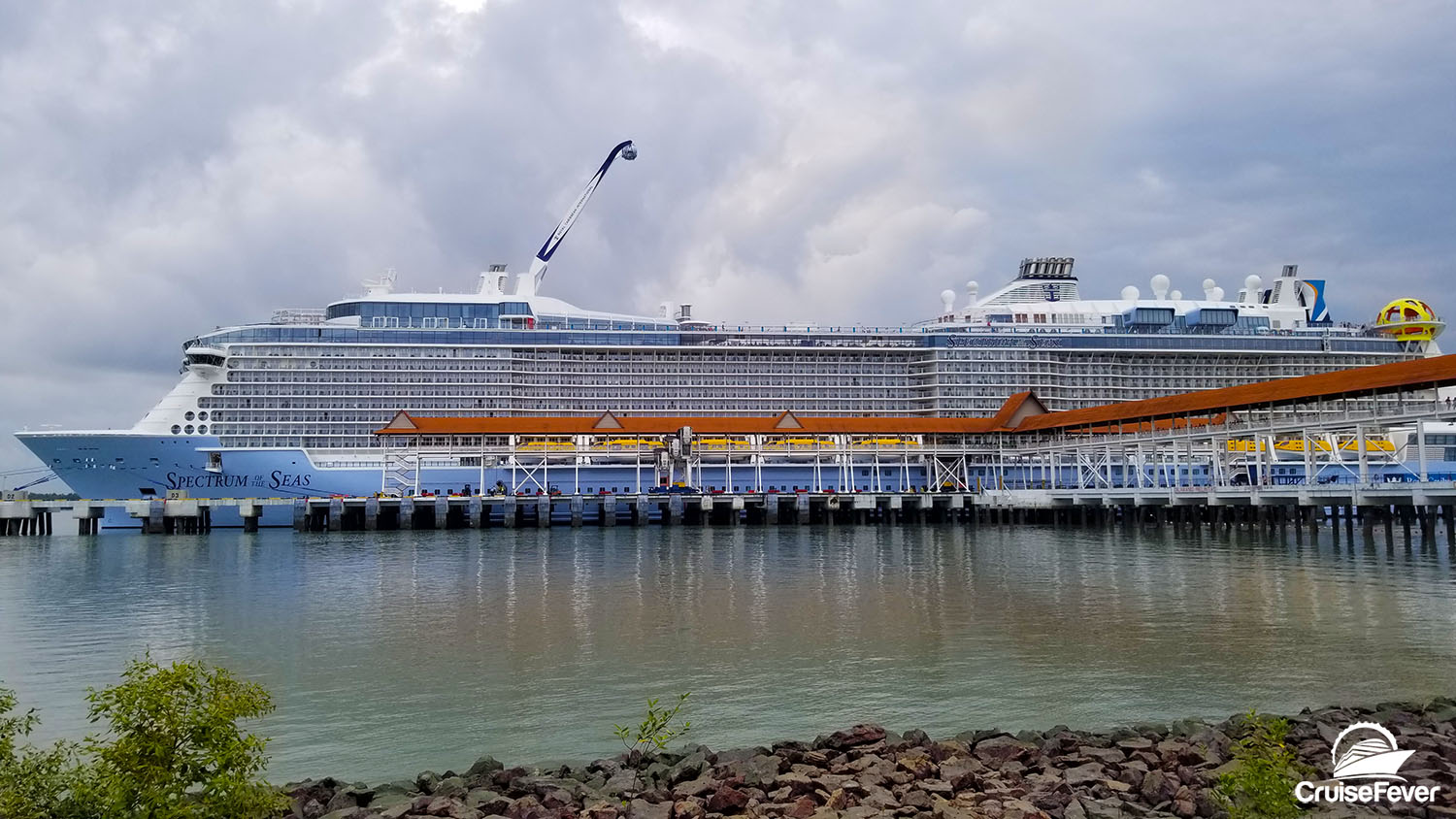 When I saw that Royal Caribbean was offering a short cruise out of Singapore on the ship’s way to China, I knew I had to book it and check out the cruise line’s newest vessel. Two weeks ago, prices dropped so I was able to upgrade into one of Royal Caribbean’s new Golden Suites for just a few dollars more. However, I will have more about these new suites and the perks with come with it after I get home. So stay tuned for more on them including photos of the new outdoor area and lounge just for these guests.

After being on board for a little over 24 hours, here are my first impressions of Royal Caribbean’s Spectrum of the Seas.

Embarkation: Three months ago, I took another Royal Caribbean cruise out of Singapore (Voyager of the Seas) and embarkation couldn’t have gone any smoother. This embarkation didn’t go quite as smooth but that mostly had to do with the way the port handles things. Check-in was a breeze but customs moved extremely slow. Yes, you have to go through customs before you board a ship in Singapore since you are leaving the country.

They only had one agent screening and fingerprinting those with non-Singaporean passports. Right when I got to the front of the line, four more agents came over to help so those behind me ended up with a shorter wait.

On the gangway, I turned in my passport and I was on the ship. From the time they called our group (I was in the first group since I was booked in a Golden Suite) to the time I was on the ship was around 30 minutes. Yes, everyone turns in their passports to the ship. This helps expedite disembarkation as they are stamped during your cruise. We’ll pick up our passports on the last day of the cruise, it’s super efficient and works well.

Ship: Spectrum of the Seas is the first Quantum Ultra class ship. I forgot how much I loved Quantum class ships since it has been four years since I have been on one. The ship has a sky diving simulator, Flowrider, Sky Pad, and the SeaPlex that has everything from bumper cars to laser tag. The ship is gorgeous and highlights the new cruise ship class of 2019.

Everything on board is in English, along with Chinese. If you want to take a cruise on the ship out of Shanghai, you’ll have no issues at all. All money on board is also in USD. I’m actually looking into taking one of the cruises out of China.

Cabin: My Golden Jr. Suite is located on Deck 16, above the Solarium. The cabin offers more room than the standard balcony cabin. I would estimate it has around 50% more room than regular cabins with a nice sized balcony. The bathroom is split. In one you have a tub, sink, and shower. In the other is a toilet and sink. After taking nearly 50 cruises on 11 cruise lines, this is my favorite cruise ship bathroom I’ve ever had.

The Golden Suites also come with a ton of extra perks including free room service (includes the full main dining room menu), free WiFi, access to the Golden Lounge and Golden Restaurant, priority disembarkation, and more. I will have more on these perks in a separate article when I get back from my cruise.

Crew: What can I say? The crew on board has been offering the spectacular service I’ve learned to expect from cruises on Royal Caribbean. They have been great and probably the best Royal Caribbean crew I’ve had in my seven cruises with the cruise line.

Odds and Ends: When entering Windjammer Buffet, there are sinks for you to wash your hands and it’s not exactly optional. A staff member is directing everyone to the sinks (a queue is set up) to wash their hands. All I can say is, THANK YOU ROYAL CARIBBEAN. Every cruise line and ship should do this and make it mandatory. It would do wonders to help prevent the spreading of illness on board ships.

One thing I love about Quantum class ships is that they are perfect for when weather isn’t all that great. The Solarium is completely enclosed and there’s an indoor pool. Add in the multi-functional SeaPlex, and bad weather doesn’t stop fun on these awesome ships.

I also lost my wallet somewhere on the ship on embarkation day. Hopefully someone will do the right thing and turn it in to Guest Services since I’m headed to Bangkok and Hong Kong when the cruise is over.

UPDATE: Thank you to whoever turned in my wallet to Guest Services when they found it in SeaPlex.

Since this is just a three night cruise and the ship offers so much, I am going to end this and enjoy Spectrum of the Seas. I will have more about the ship when I get home.

However, I will be posting photos and video of Spectrum of the Seas on a few social media channels. You can follow Cruise Fever on Instagram and Twitter to see more of the ship.

Ben Souza
Ben is a world traveler who has visited 42 countries and taken over 50 cruises. His writings have appeared and been cited in various media outlets such as Yahoo News, MSN, NPR, Drudge Report, CNN, Fox, and ABC News. Ben currently resides in Cincinnati, Ohio. Follow Ben on Instagram. Visit Ben Souza on Linkedin. You may email Ben at [email protected]
Ships Royal Caribbean First Impressions of Royal Caribbean's Newest Cruise Ship, Spectrum of the Seas
Previous articleWhat You Should Do on the Last Day of Your Cruise
Next articleCarnival Cruise Line Giving Military Service Members Discounts on Cruises

Well, that 3-day cruise went really fast. Sailing on one of the largest cruise ships in the world on a 3-day itinerary is not...
Read more

Well, that 3-day cruise went really fast. Sailing on one of the largest cruise ships in the world on a 3-day itinerary is not...
Read more
Royal Caribbean

It has been almost a decade since Oasis of the Seas made her maiden voyage. Since then Royal Caribbean has added three other sister...
Read more

ABOUT US
Two brothers started Cruise Fever in 2011 when they decided they couldn't stop cruising so they might as well write about it. Do you have Cruise Fever too? Follow along on this incredible voyage!
FOLLOW US
© 2011-2021, Cruise Fever ®. All rights reserved
2.9K Shares
Share2.9K
Tweet
Pin
Email
Share