Large Group Cruises and How to Avoid Them

Group cruises are becoming more popular than ever, and they can be a lot of fun if you are part of the actual group.  We are not talking about small family reunion groups here, either.  We are talking about large groups that work in concert with the cruise line to reserve parts of the ship for the group only.  These groups can be anything from fans of a certain genre of music to reunions and companies. 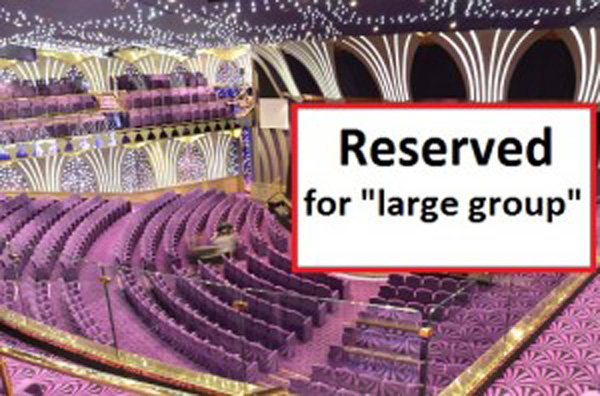 So why avoid them?  Well it’s not always a bad thing to book a cruise that another large group will be using.  In fact, sometimes you will not even notice that a group has booked a significant part of the ship for their venue.  The problem comes in when certain parts of the ship are off-limits to the general cruise public and certain shows and venues are also cancelled so the group can make use of the ship’s auditorium or lounges.

I have been on a cruise where the large group was very noticeable.  So noticeable, in fact, that as the week went on I questioned if it was worth being on the ship at all.  I won’t mention the name or purpose of the group, but they took up more than half the ship and even brought their own speakers and sound equipment.  They played in the auditorium (which was off limits to people not in their group) and even setup several concerts on the pool deck with music so loud that my wife would run through the pool deck each time just to avoid having our ears ring from the noise level.  And yes, as we tried to sleep we could hear their concerts loud and clear.  It would not have been so bad if the group was full of polite, fun, and engaging members.  But this was not the case, as constant swearing and vulgarities were heard constantly on the ship along with obnoxious behavior that paid no mind to other cruisers.  We couldn’t even use the hot tubs due to members of the group using them constantly for hours at a time.

I understand that not all groups are going to be this difficult to deal with.  As I said, some will be an actual delight to be with or you will never notice at all.  The problem is that you never really know until you get aboard the ship.  But there are a few tips you can try to see if a large group will be cruising on a ship for certain dates.

The best thing to do is to try to use your favorite search engine to search the dates of the cruise and name of the ship.  Try the dates in different formats and see what comes up.  Often times, if it is a larger group booking part of the ship, they will have these details mentioned on a webpage or forum somewhere online.  This was the case for my dreaded cruise and I could have avoided all of the craziness if I simply did this searching.

You will not always get a good idea of the size of the group from the webpage, but some of them will say how many tickets are available or what the limit is.

You can also ask your travel agent about any large groups.  This information is not always privy to them, but often they will have some insider knowledge as to who else will be cruising with you, so it doesn’t hurt to ask.

There used to be a website that listed all of the large group cruises, but I have done some research and it is no longer in existence.  Alternatively, you can check out http://themecruisefinder.com to find group cruises.  You can’t search by ship, however.  You can look at the different categories for the themes and see if a cruise is scheduled during your trip.  You can also use Google to search for listings on this site.  For instance, just type in Google  “site: http://themecruisefinder.com Carnival Liberty”.    You will see a list of group cruises for that ship.  Keep in mind that this does not include all group cruises and some of these groups are very small and would not impact your cruise in the slightest.  But it’s a good resource to have.

If you knew there were going to be 2,000 people going on your cruise from one group and they were going to be blocking you from certain parts of the ship and canceling some of the entertainment would you still book it?  Some of you would, but it would also scare some potential cruisers away.  And cruise lines will never do anything to discourage you from going on a cruise with them.  They will never advertise these groups so don’t expect them to tell you.  If they can’t sell as many rooms as possible on a cruise ship they aren’t making as much money.

Large groups may take over the auditorium, pool deck, bars, lounges, and even dining rooms.  Since cruise lines keep these things secret, it’s up to you to find out if a large group is going to be on a certain cruise.   Some group cruises may actually be enjoyable so before you avoid a cruise just because there is a large group booking it, look at what type of group it is and try to assess how intrusive it will be.  I have heard of some people booking cruises along with a group of doctors and also some with photographers and they enjoyed meeting the nice people in the groups.

So what do you think of group cruises?  It seems like everyone has an opinion on this one, and some of you may even disagree with me on a few points, so let me know in the comment section below.

J. Souza
Jon got hooked on cruising after his first cruise on his honeymoon, and today he is always looking for cruise deals and reading information about the cruise industry. Jon lives in the foothills of North Carolina and wishes there were a cruise port that far inland. Jon can be reached at [email protected]
Cruise TipsLarge Group Cruises and How to Avoid Them
Previous article
Cruise Ship Scores 13th Straight Perfect 100 Health Score
Next article
Cruise Line Adding Second Cruise Ship for Daily Cruises to the Bahamas