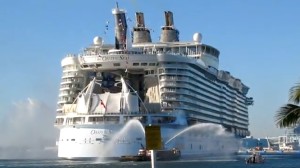 Good news for European cruise lovers that want to cruise on one of the largest cruise ships in the world.  Royal Caribbean is sending the Oasis of the Seas to Europe in 2014 for three cruises before it heads into drydock for maintenance.

The Oasis has been sailing out of Port Everglades in Ft Lauderdale, Florida since the ship was christened in late 2009. Royal Caribbean announced that the cruise ship will head to Europe on a 12 night cruise to Barcelona, Spain on September 1, 2014.  The Oasis will then sail two Western Mediterranean cruises and one to the Netherlands.

The two Western Mediterranean cruises will be five nights long.  The third European cruise will be a seven night cruise from Barcelona to Rotterdam.

After the three European cruises, the Oasis will undergo its scheduled maintenance in a Rotterdam shipyard.  After the drydock, the ship will sail a 13 night cruise back from Southhampton, England to Port Everglades on October 15, 2014.  When the ship returns back to South Florida, the Oasis will resume sailing seven night cruises to the Western and Eastern Caribbean.

Royal Caribbean’s President and CEO Adam Goldstein wouldn’t comment on whether this was a test run to see if there was a market demand for an Oasis class ship in Europe.  He said, “Today we realize that in the future, as the cruise industry continues to grow around the world and infrastructure continues to develop around the world, that even Oasis-class vessels can be who-knows-where around the world”.

Ben Souza
Ben is a world traveler who has visited 40+ countries and taken over 70 cruises. His writings have appeared and been cited in various media outlets such as Yahoo News, MSN, NPR, Drudge Report, CNN, Fox, and ABC News. Ben currently resides in Cincinnati, Ohio. Follow Ben on Instagram. Visit Ben Souza on Linkedin. You may email Ben at [email protected]
Cruise NewsOasis of the Seas to Sail 3 Cruises to Europe in 2014
Previous article
12 Cruises Canceled by Carnival to Repair its Ships
Next article
How to Choose a Cruise Line: Comparison of the Top 10 Cruise Lines