Enchantment of the Seas Review | 3 Night Cruise to Bahamas

This Enchantment of the Seas review is from a 3-night voyage out of PortMiami with stops in CocoCay and Nassau, Bahamas.

You know that feeling you get?  As soon as you step on board a cruise ship and look around you get this feeling that you’re really going to like the vessel and all it offers?  This was my first cruise on a Vision class ship with Royal Caribbean’s Enchantment of the Seas.  And the reaction was immediate.

I walked through the 7 deck atrium, known as Centrum, and there was a sense of familiarity.  The 82,000 ton vessel might be small by today’s standards, but after 3 days sailing on Enchantment of the Seas I found many benefits to sailing on a cruise ship like this.

It never felt crammed, spaces never felt crowded, and the size of the ship  made it easy to navigate as I explored all 11 decks.

Check out a video tour of Enchantment of the Seas I put together:

This video covers every aspect of the ship from top to bottom.  At the end of the video you can see a video tour of my stateroom, an ocean view cabin on deck 4.

A little history of the ship

She was built in 1997, but in 2005 Enchantment of the Seas was overhauled.  The ship was cut in 2 and a 73-foot section was added, which included trampolines, more pool space, a fountain for the kids, suspension bridges, and 151 extra staterooms.

More recently, in 2012 a few more upgrades were added which included the Park Cafe (right behind the Solarium), a poolside movie screen, flat-screen TV’s in staterooms, and upgraded Wi-Fi across the ship.

With all the hype of newer and bigger cruise ships, some people forget that some of these older, more intimate ships are the most beloved ships in the ocean.   Travelers looking for a simple 3 or 4 night vacation on a ship that caters to a more traditional maritime experience just love ships like Enchantment of the Seas.

Lido Deck on Enchantment of the Seas 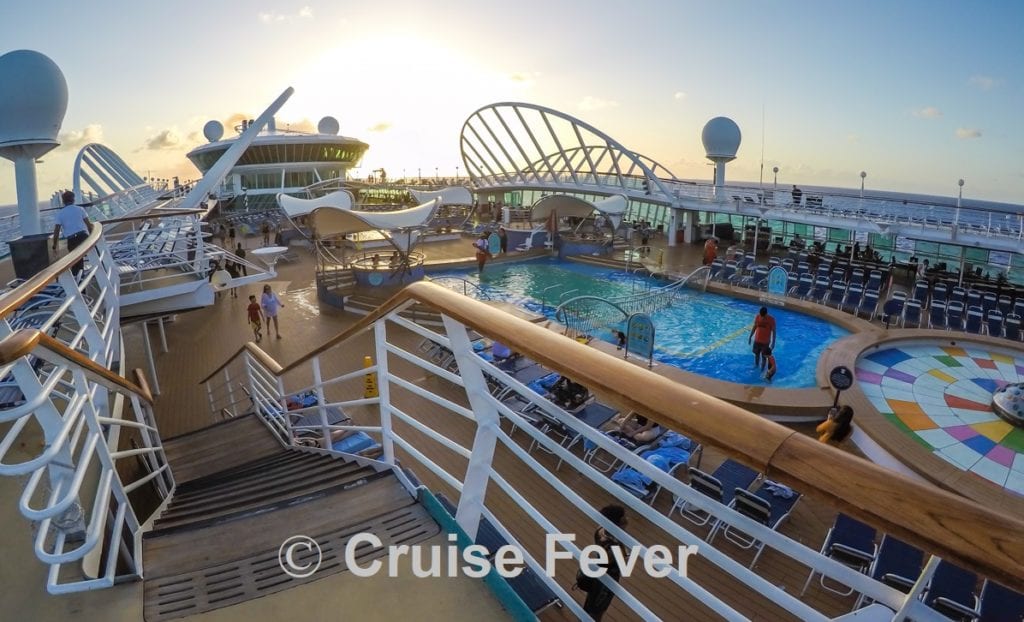 One of the things I always look for when I’m checking out the pool deck is how easy it is to navigate from one end to the other.  Typically you must pass through this area to get to the buffet and on some ships you have to really perform some circus acts just to zig-zag around loungers and obstacles.

But with Enchantment of the Seas it was a breeze to walk through the lido deck.  There were always plenty of empty loungers available and ample space to walk between them.  Alternatively, you could walk up the stairs to deck 10 and use the suspension bridges to bypass the pool deck traffic.  By the way, I really liked these bridges.  They offer great views of both the pool deck and the ocean and really make the space feel open and inviting.

Dining Options on Enchantment of the Seas

Chef’s Table is an exclusive dining experience that offers multiple courses hosted by a chef on the ship.  There is an $85 dining fee plus 18% added gratuity.  This dinner will last anywhere from 2 to 3 hours, and reservations are required as seating is limited.

Windjammer Marketplace is the buffet area.  And while much smaller than today’s cruise ship buffets, the area never seemed that crowded except on embarkation and debarkation days.  I really enjoyed the assortment of food available at Windjammer.  The dessert options were so plentiful that I found myself just eating dessert for a couple meals.  But don’t judge.  If you were there you might have done the same thing.

Windjammer Annex is an area on the port side of the ship that has a late-night beverage station and also has a gluten-free station during meal times.

Right outside Windjammer on the starboard side of the ship you will find an ice-cream station.  Chocolate, vanilla, and strawberry ice-cream was available all day and night.

If you want a more exclusive ice-cream experience you can check out Cafe Latte-tudes & Ben and Jerry’s on deck 6 near the atrium.   Besides ice-cream you can get a specialty coffee or tea for a nominal fee.

Solarium Park Cafe is missed by a lot of cruisers.  It’s an area right  behind the Solarium and offers snacks, coffee, and a simple breakfast menu if you want to avoid the hustle and bustle of Windjammer.  For breakfast you can get an egg and cheese sandwich or pick up a croissant, but don’t expect all the same options from the main buffet area.

During the afternoons Park Cafe has a few snack items as well.

Things to Do Around Enchantment of the Seas

The Sports deck (deck 10) has a couple things for people looking for something to do on board.  One is the rock climbing wall at the very back of the ship.  It’s only open for a few hours during the day so check your Cruise Compass for times.  Because of the positioning of the rock climbing wall it’s hard to watch people making their climb, so if you want to get pictures of your loved one climbing the wall you have to actually be inside the gated area.

The ship is also equipped with a Jump Zone, which is a trampoline set up at the very front of the ship on deck 10.   Keep in mind that this area will be closed during high winds, which was the case on my cruise so I never actually saw anyone using this area.

There are also two ping-pong tables on either side of the ship on deck 9.

Feel like catching a show?  Check out the beautiful Orpheum theater.  During this 3 night cruise there was a comedian, a musical production, and an Elton John tribute.  The seating in the theater was comfortable and spacious and was never filled to capacity on this particular cruise.

There was always something fun going on at Centrum so if you ever feel listless while walking around the ship, be sure to walk by the atrium to see a gameshow, some fun trivia, or even the parade of flags, which is always a lot of fun.

If you need to stay connected while at sea, rest assured that Voom is available on this ship.  This offers some of the fastest internet at sea with prices ranging from $12.99 per day (surfing) to $17.99 per day (video streaming).  I tested it out, and yes it is fast enough for streaming video.

Solarium and Spa on Enchantment

Located in the forward part of the ship, the solarium was my favorite area.  Protected from the harsh sun and inclement weather, the solarium offered a little peaceful oasis.  There are two hot tubs on either side of a central pool, surrounded by columns and padded loungers.  There is a bar area where you can get refreshments as well.

The spa is right behind the solarium, so you can walk straight from your spa treatment to a nice relaxing spot to keep the relaxation going.

The spa is cozy and inviting but keep in mind that there are no saunas on this ship.  Treatments available are acupuncture, teeth whitening, cellulite and skin treatment, manicures, pedicures, hair styling, and of course massages.

An Incredible Cruise Director On Board

I don’t always mention the Cruise Director from my cruises, but this time it just has to be said.  Bobby Broughton was one of the best CDs I’ve ever had on a cruise.  Watching him on the stateroom television every morning was Must-See-TV.  He was hilarious and fun and just made the cruising experience even better.   Bobby made the parade of flags ceremony very enjoyable with his funny antics and bright personality, and it was one of the best parts of this 3-night cruise.  If you ever have the chance to sail with Bobby on your cruise you will know exactly what I’m talking about.  Other CDs can take notes from this guy.

I would definitely take a cruise on this ship again.  There is something charming about the layout and size of Enchantment of the Seas, and it’s the perfect ship for a 3 or 4 night cruise.

I miss not having a thermal suite, but the solarium sort of made up for that.

There were always plenty of empty loungers to choose from, and the pool deck never seemed over-crowded or cramped.

This is the perfect ship for a either a first-time cruiser or someone just looking for a quick getaway on a ship that has proven to be a favorite among Royal Caribbean fans.

J. Souza
Jon got hooked on cruising after his first cruise on his honeymoon, and today he is always looking for cruise deals and reading information about the cruise industry. Jon lives in the foothills of North Carolina and wishes there were a cruise port that far inland. Jon can be reached at [email protected]
Ships Royal Caribbean Enchantment of the Seas Review | 3 Night Cruise to Bahamas
Previous articleHolland America Line Celebrates 145th Anniversary
Next articleNorwegian Cruise Line Takes Delivery of Their Newest Ship, Norwegian Bliss

Well, that 3-day cruise went really fast. Sailing on one of the largest cruise ships in the world on a 3-day itinerary is not...
Read more

Well, that 3-day cruise went really fast. Sailing on one of the largest cruise ships in the world on a 3-day itinerary is not...
Read more
Royal Caribbean

Spectrum of the Seas is Royal Caribbean's first Quantum Ultra class cruise ship. The ship debuted just a few weeks ago and I hopped...
Read more

Carnival Cruise Ship Returns Home for the First Time in 3...

Ben Souza - October 1, 2022
A Carnival cruise ship returned to its homeport for the first time in nearly three years and became the first cruise ship to enter...