Royal Caribbean’s Allure of the Seas is currently the world’s largest cruise ship at 225,282 GT. I recently had the chance to take a two night cruise on this 1,187 foot long ship.  Since I didn’t spend enough time on Allure of the Seas to write a complete review on the ship, here are my first impressions. 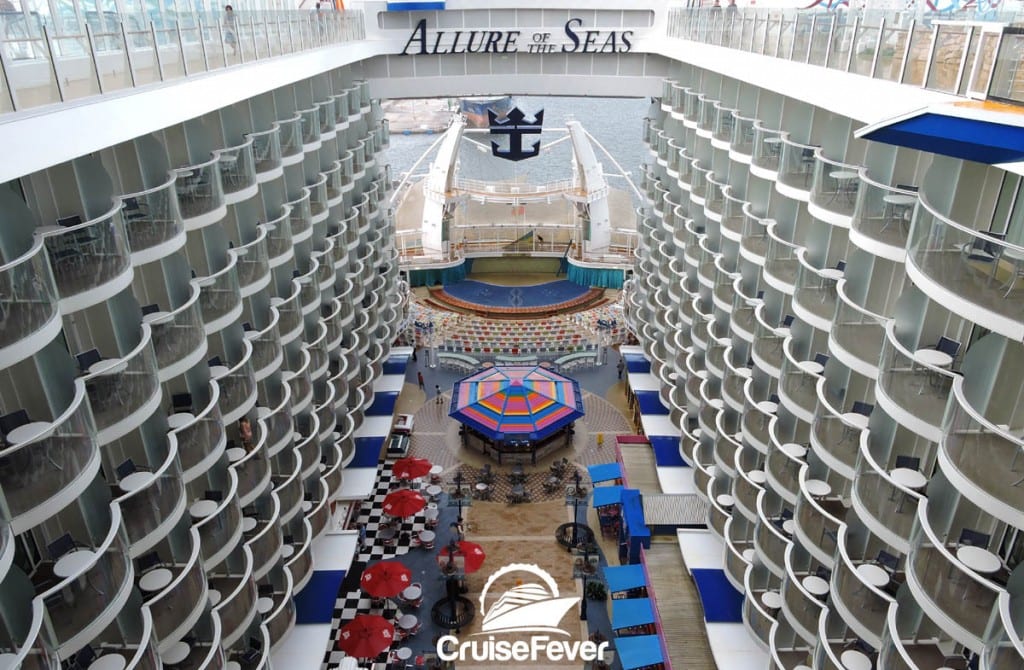 Even though Royal Caribbean prides themselves on the WOW factor, it isn’t until you walk on the ship that you really understand what it’s all about. Simply put, Allure of the Seas is an incredible cruise ship.  I am still trying to decide which part of the ship I liked best. It would have to be a tie between the Boardwalk, Royal Promenade, and Central Park.


Even with 6,000 passengers on board, the ship never once felt crowded. (An obvious exception would be when shows let out) There are so many features unique to this class of cruise ship, you can’t compare them to any other ships at sea.

The three main shows are Mamma Mia!, OceanAria Aqua Show, and Ice Games.  Since I was only on two nights, I opted for OceanAria and Ice Games. OceanAria was impressive, easily one of the top 5 shows I’ve seen at sea.  The combination of stunts and dives from as high as 50 feet were incredible. Attending a show at the Aqua Theater is a must when cruising on an Oasis class ship, there is nothing else that compares to it at sea.

Ice Games was a fun show that took place in Studio B, the ice skating rink onboard Allure of the Seas. World class ice skaters played scenes from Monopoly and received a standing ovation from the passengers at the end of the show.  I am normally not a fan of most shows on cruises, but thoroughly enjoyed both shows that I attended.

Everywhere I went, the staff greeted me with a smile and a friendly hello.  Our room steward introduced himself on embarkation day and I saw him several times throughout our cruise. My cabin was always clean and he took care of anything that I needed.

I had a balcony stateroom with a view overlooking Central Park.  The cabin had a large balcony and the bed/pillows were super comfortable.  I always enjoy the newer ships that have a glass shower door instead of the clingy shower curtain that so many ships have.  You can watch a short video tour of my cabin in the video below.

If you go hungry on Allure of the Seas, it’s your own fault.  There are around 20 options to choose from that range from casual to traditional dining.  There is also a nice variety of specialty restaurants with several of them offering outdoor dining in Central Park.

I was pleasantly surprised at how many options there were for breakfast, lunch, and dinner.  There were 9 places open for lunch, and that’s not including Sorrento’s, Boardwalk Dog House, and Cafe Promenade.

The biggest thing I learned is that two nights isn’t even close to enough time to spend on Allure of the Seas.  It’s a great ship that had something for everyone. Now I just need to plan a week long cruise so I can experience all that the ship has to offer.