I recently had the chance to take a weekend cruise on the Norwegian Breakaway out of New York City. Although we had cold weather, snow, and rough seas (All outside decks were closed due to 70 mph winds), the ship offered a wide variety of activities and a little something for everyone.  Here are my first impressions of the Norwegian Breakaway. 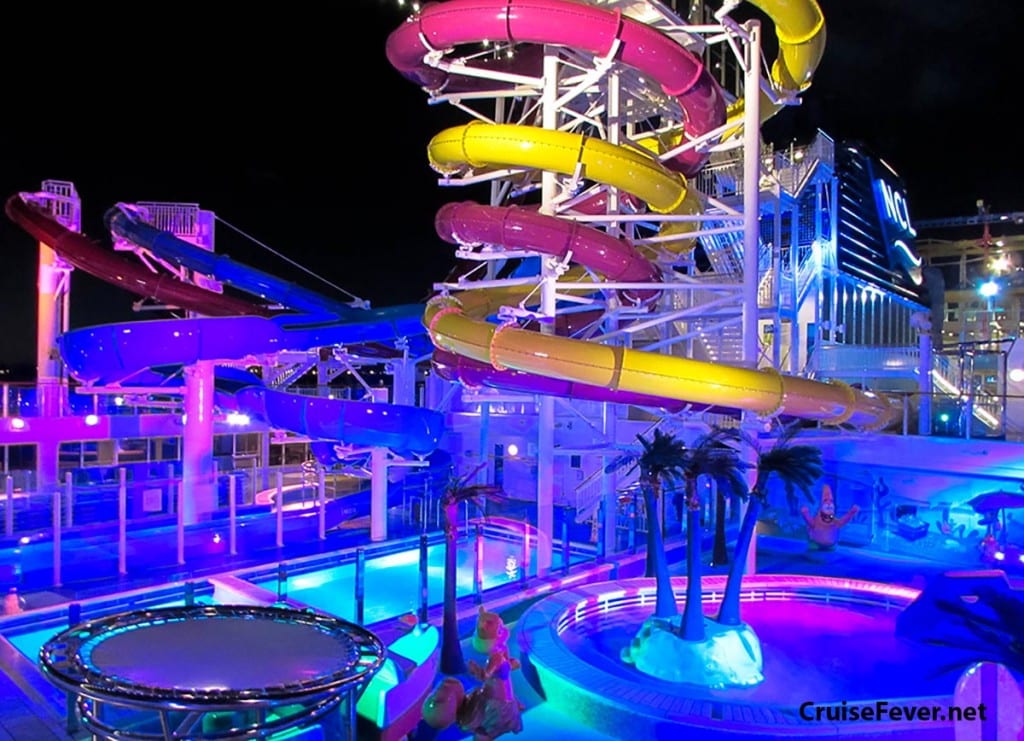 The crew on the Breakaway always greeted me with a smile and a hello, even if we were just passing in the hallway.  I was really impressed with how friendly they were compared to a few recent cruises I have taken on other cruise lines.

Service for meals was for the most part great, but it was a little slow in Cagney’s.  While dinner at most steakhouses at sea tend to be longer than meals in the main dining rooms, our meal at Cagney’s took almost 2 1/2 hours.  We sat down at 7:30 and didn’t receive our first appetizer until 8:15. Our waitstaff was friendly but service was definitely on the slow side.  They did apologize for the delays.

However, service in the Manhattan Room and at O’Sheehan’s was quick and spot on and the staff did a tremendous job. 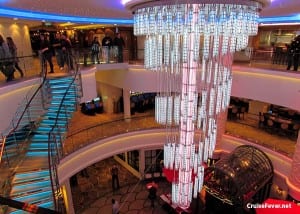 The Norwegian Breakaway is a 4,000 passenger ship and currently one of the top 10 largest in the world.  The layout of the ship was the easiest to learn out of all the ships I have been on (I cruise 5-8 times a year).  It has a really good flow and I quickly learned my away around the ship on embarkation day.

I really loved the decor of the Norwegian Breakaway.  From the color changing LED chandelier to the themed restaurants, the Breakaway is a beautiful ship and still has that new ship look. The atrium has a huge 2 story TV screen that is great for trivia, games, and various demonstrations that were held by the staff.

During our cruise, we experienced 23 foot swells and 62+ knot (70 mph) winds.  This caused the ship to rock a bit and a few plates to crash to the floor in the buffet.  However, I felt the ship was a lot smoother than smaller ships in far better conditions.  Once the captain turned us away from the storm, you could hardly feel the ship move even though sea conditions were still rough.

Video Tour of the Norwegian Breakaway 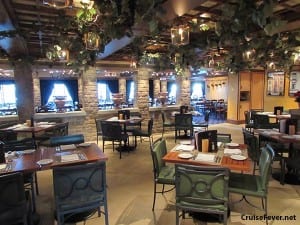 You will not go hungry as there are 29 dining options on the Norwegian Breakaway.  There are three main dining rooms (Manhattan Room, Savor, and Taste) that all have the same menu each night. Savor and Taste are smaller venues while the larger Manhattan Room offers some live music and entertainment during dinner.  Making reservations, although not required, can help you avoid waiting if you like to eat at popular dinner times.

The Garden Cafe Buffet offered a good variety of options for breakfast, lunch, and dinner.  O’Sheehan’s is a complimentary 24/7 sportsbar so you can always grab a bite to eat if you are hungry.  I was impressed at the number of complimentary sit-down restaurants open for breakfast and lunch.  Savor, Taste, and Moderno gave passengers plenty of options in addition to the buffet and sportsbar.

For dinner, the options seemed almost endless as a wide variety of specialty restaurants were available in addition to the main dining rooms.

Food can be extremely subjective and what I enjoy, another passenger might hate.  With that being said, I thought the food was good overall and there were enough options for even the pickiest of eaters.

We had a port-side deck 11 balcony stateroom that was roomy and nicely laid out.  The shower had a glass door which was really nice since I’m not a fan of those clingy shower curtains that are on most cruise ships.

The balcony was a bit smaller and similar in size to the new Royal Class ships from Princess Cruises.  There was a flat screen TV although the angle wasn’t great from the bed. There was a decent sized couch, closet, mini fridge, and two electrical outlets on the desk.  The bed was comfortable and overall it was a great cabin.

Video Tour of our Stateroom

One benefit to sailing on the Norwegian Breakaway is the view of New York City during sailaway.  The view of the NYC skyline on one side and the Statue of Liberty on the other are incredible.  Even though it is cold many months of the year during sailaway, it is definitely worth being out on deck for the view.

The comedy shows in Headliners were extremely popular and I highly recommend making reservations as soon as you can if you want to attend. 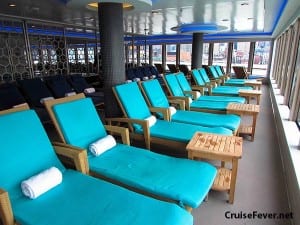 The Thermal Spa in the Mandara Spa was huge and had an amazing view overlooking the bow of the ship. The entrance fee is definitely worth the hydrotherapy pool, heated loungers, hot tubs, sauna, and steam rooms.

Internet on the Breakaway is based on the number of MB used, not by minutes.  It is great for those who want to lightly surf the web or check in on family back home, but not for those who like to upload a lot of pictures and videos.  WiFi is available from bow to stern.

Pepsi products are the soft drinks sold onboard.

You could walk through the casino without choking from smoke.  Many times, I didn’t even smell smoke at all which is great since it is very open to the deck below and above it.