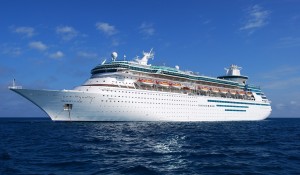 Scores of passenger and crew members on Royal Caribbean’s Majesty of the Seas became sick this past week while on a 4 night cruise to Key West and the Bahamas.  There were 66 reported cases of the norovirus illness with all but 2 of them being passengers on board.

The Majesty of the Seas stopped in the ports of Key West, Florida, Nassau, and the cruise line’s private island in the Bahamas, CocoCay.  The ship arrived back in Port of Miami on Friday morning.  There were 3,300 passengers and crew members on board the ship at the time of the outbreak.

The norovirus is easily spread on cruise ships with the tight confines of the vessels.  Affects of the illness are generally vomiting and diarrhea and it usually lasts between 24-72 hours.  The 64 passengers and the 2 crew members affected were given over the counter medication that had positive results the cruise line stated.

Royal Caribbean said that an enhanced cleaning took place after the ship returned to port to help keep the virus from spreading.   The cruise terminal was also cleaned and sanitized in the extensive cleaning.

The Majesty was able to leave port on Friday evening for a 3 night weekend cruise to the Bahamas.   Passengers were asked if they had any gastrointestinal illnesses in the previous 72 hours.  Royal Caribbean let passengers who were uncomfortable cruising on that voyage the chance to reschedule their cruise.

The norovirus affects nearly 20 million Americans each year and results in 500-800 deaths.

Ben Souza
Ben is a world traveler who has visited 42 countries and taken over 50 cruises. His writings have appeared and been cited in various media outlets such as Yahoo News, MSN, NPR, Drudge Report, CNN, Fox, and ABC News. Ben currently resides in Cincinnati, Ohio. Follow Ben on Instagram. Visit Ben Souza on Linkedin. You may email Ben at [email protected]
Cruise News Norovirus Outbreak Hits Royal Caribbean Cruise Ship
Previous articleCruise Deals Heat Up As Wave Season Kicks Into High Gear
Next articleFan Cruise to Be Hosted by New England Patriots in 2015