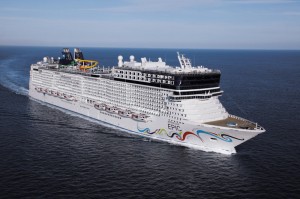 Norwegian Cruise Line has announced that their first mega cruise ship, the Norwegian Epic, will sail year round out of Barcelona, Spain beginning in the spring of 2015.  The last week long cruise to the Caribbean will take place on April 12-19, 2015 out of Miami, Florida.

The Epic has been cruising 6 months from Miami, FL to the Caribbean in the winter months and 6 months from Barcelona, Spain in the summer months each year since the cruise ship was built in 2010.

The Epic features over 20 dining options and was the first cruise ship to offer cabins specifically for solo travelers.  The cruise ship was also the first 4,000 passenger “mega” cruise ship built by Norwegian and is the largest cruise ship in their fleet of 13 ships.

This news comes on the heels of the Norwegian Getaway, as the newest cruise ship in the world makes her way over from Southampton, England.  The Getaway will sail year round, 7 night cruises to the Caribbean from Miami beginning in February.  The Getaway will be joined in Miami by the Norwegian Escape in 2015.  Although the itineraries for the Escape have not been announced, this first Breakaway Plus ship will also cruise to the Caribbean.

The news of Norwegian moving the Epic to Europe full time is not a surprise.  The bathroom configurations are more popular with Europeans and with Norwegian sending the new Breakaway Class ships to Miami, it was the most logical move for the cruise line.

Norwegian took entertainment to new heights with the debut of the Epic.  The award winning Blue Man Group has anchored the entertainment on board that includes Cirque Dreams and Dinner, Second City Comedy, Legends in Concert, dueling piano shows and Nickelodeon at Sea for the youngsters.

The Norwegian Epic is currently the 3rd largest cruise ship in the world, only behind the Oasis and Allure of the Seas from Royal Caribbean.  However, the Epic will drop to 4th when the Quantum of the Seas makes her debut  in November, 2014.

Ben Souza
Ben is a world traveler who has visited 40+ countries and taken over 70 cruises. His writings have appeared and been cited in various media outlets such as Yahoo News, MSN, NPR, Drudge Report, CNN, Fox, and ABC News. Ben currently resides in Cincinnati, Ohio. Follow Ben on Instagram. Visit Ben Souza on Linkedin. You may email Ben at [email protected]
Cruise NewsNorwegian Epic Leaving Miami For Barcelona in 2015
Previous article
Carnival Cruise Line Headed Back to Norfolk
Next article
Cruise Deals Heat Up As Wave Season Kicks Into High Gear