How Important is the Muster Drill Aboard a Cruise Ship? 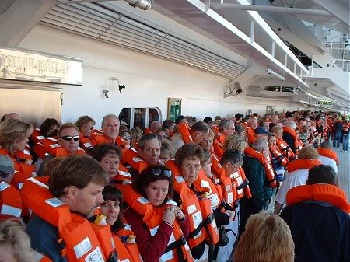 I have cruised with several different cruise lines and I am amazed at how different the experience can be on different ships.    And in light of the recent Costa Concordia wreck, I can only think how important it would have been for both the crew and passengers to be more prepared for such a situation.

The muster drill is the part of the cruise most people can’t stand.  Everyone has to get dressed in those pretty orange vests called life jackets and meet in a certain location to go over safety protocol in case of  an emergency.  This usually happens before the ship leaves the port or just after and is mandatory for every passenger.  By law the muster drill must take place within the first 24 hours from embarkation.  But it’s usually better for cruise lines to just get this out of the way so the paying passengers can get back to enjoying their vacation.

When cruising with Royal Caribbean I was amazed at how efficient and organized their muster drill was.  Everyone was standing in single file lines and the crew called out cabin numbers to make sure everyone was there before they went over how to use the life jackets and what the procedure would be in case of emergency.

I have heard that Princess cruise lines has a very organized muster drill as well.

And then, while sailing on an MSC ship a few months ago, it was even more amazing to see what a joke the muster drill was.  We all just stood and sat around in a large lounge with our life jackets on, and after a chaotic demonstration on how to use the life jackets, that was it.  The drill was not even on the outside deck, and I don’t even know what door I was supposed to go out to get on a lifeboat in case of disaster.  It was a bit unnerving to say the least, that this Italian cruise line did not think the muster drill was that important.

With humongous ships now sailing the open seas, new regulations have allowed for these larger vessels to allow the passengers to meet in large open lounges instead of on open decks.  And life jackets are not being provided at the muster stations themselves, which only makes sense to me, since in an emergency you don’t want people running back to their cabins for their life jackets and clogging up those narrow hallways.

With the Costa Concordia wreck, the ship was still well within the rules of SOLAS (Safety of Life at Sea), since it had not been a full 24 hours since embarkation, but this means that some 700 passengers who had just boarded from Rome had not taken part in the muster drill.

After the way the Concordia cruise ship situation was handled, many cruise lines and the industry in general is reassessing how and when it handles those muster drills.  But this being said, it was largely human error that led to the unfortunate events of the Concordia disaster, and if protocol was followed properly it would not have been such a tragic loss.

When you get on a cruise ship you are probably just ready to start enjoying your vacation, but you still want to have the peace of mind of knowing that your cruise line and captain is capable of handling even the worst of situations.

We would love to hear from our readers to see what you think of muster drills and which cruise line you think is best at preparing their passengers for an abandon ship.  I have been impressed with Royal Caribbean but hear that Princess does a great job as well.

J. Souza
Jon got hooked on cruising after his first cruise on his honeymoon, and today he is always looking for cruise deals and reading information about the cruise industry. Jon lives in the foothills of North Carolina and wishes there were a cruise port that far inland. Jon can be reached at [email protected]
OpinionHow Important is the Muster Drill Aboard a Cruise Ship?
Previous article
Port of Miami signs deal with MSC Cruises
Next article
Tips on Making Copies of Your Passport Before Your Cruise