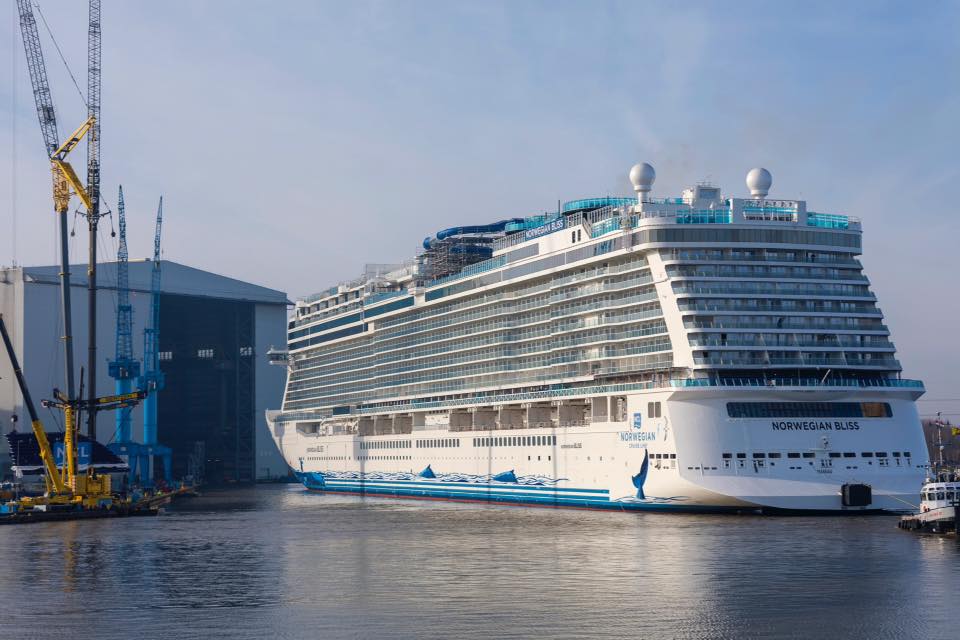 Now that Norwegian Bliss has been floated out of dry dock, the final work can be completed to prepare the cruise ship for her inaugural cruise in April 2018.

Norwegian Bliss will sail a series of one way cruises as the ship makes her way to Seattle for the Alaska cruise season. Once in Seattle, the cruise ship will sail week long, round trip cruises to Alaska with port stops in Ketchikan, Juneau, Skagway, and Victoria.

Norwegian Bliss will boast excitement around every corner and delight guests with thrills, with activities spanning the entirety of the ship’s top deck. Following overwhelming popularity aboard Norwegian Bliss’ sister ship in China, Norwegian Joy, guests will be able to put the pedal to the metal for the first time aboard a North American-based cruise ship with a two level electric-car race track.

The competitive track, the longest at sea at nearly 1,000 feet, will rev up the hearts of all who race around her many twists and turns with four speed settings accommodating novice, intermediate and advanced drivers, reaching up to 30 miles per hour — with a special “turbo boost” available on each lap. The electric cars run silent so as to not disturb those seeking to enjoy the serene environment. But guests will have the full racing experience while they channel their inner Andretti, as the sounds of a race car engine are piped in through speakers located in the car’s headrest.

After working up a sweat, guests aboard Norwegian Bliss can cool down at the ship’s expansive pool and sundeck featuring two spacious pools and six infinity hot tubs that scale the side of the ship. The ship’s Aqua Park also includes two multi-story waterslides. Not for the faint of heart, the high-speed Ocean Loops free fall slide includes two exhilarating loops, one that extends out over the side of the ship and a second see-through loop that stretches down to the deck below, sure to offer a wet and wild ride. The tandem Aqua Racer slide allows guests to race side-by-side on inner tubes for more than 360 feet, with a translucent section that provides stunning ocean views as guests twist and turn to the finish line.

Norwegian will bring together the best of its specialty dining experiences aboard Norwegian Bliss with signature à la carte restaurants including French cuisine at Le Bistro; the tastes of Tuscany at La Cucina; the finest fresh seafood at Ocean Blue; global fusion cuisine featuring sushi, dumplings, handhelds and more at Food Republic; Cheeseburgers in Paradise® at Jimmy Buffett’s Margaritaville® at Sea; and handmade cupcakes and macarons at The Bake Shop. Teppanyaki, the brand’s family-favorite Japanese hibachi steakhouse will also be onboard at cover charge pricing.

Norwegian Bliss will serve up premium quality cuisine with fresh ingredients in all complimentary dining venues with rotating menus curated by the brand’s coveted culinary team. In a new complimentary dining concept, The Local will offer guests pub fare in a relaxed neighborhood atmosphere 24 hours a day.

Norwegian’s vibrant nightlife scene will be taken to the next level aboard Norwegian Bliss with live entertainment, electrifying deck parties at Spice H2O and an expansive casino featuring hundreds of slot machines and table games to suit the likes of novice and pro gamblers alike. In a first for Norwegian, the casino will now offer a smoking and a non-smoking casino to cater to all guest preferences.

Norwegian Bliss’ custom design will offer guests the freedom and flexibility to “imagine Bliss” and create their ideal experience at sea, with a wide variety of accommodations including luxurious suites in The Haven by Norwegian®, Studio staterooms for solo travelers with virtual ocean views, and new connecting staterooms ideal for large groups and families traveling together. Norwegian Bliss will also feature an incredible lineup of entertainment offerings including the Tony-Award winner for “Best Musical” Jersey Boys and two observation lounges, including the exclusive Horizon Lounge for guests of The Haven®, perfect for whale watching in Alaska or taking in sunsets in the Caribbean, and more. Continuing its tradition of featuring original artwork on its ship’s hulls, Norwegian Cruise Line commissioned Wyland, one of the world’s premier marine life artists, to design the hull art for Norwegian Bliss.

Ben Souza
Ben is a world traveler who has visited 40+ countries and taken over 70 cruises. His writings have appeared and been cited in various media outlets such as Yahoo News, MSN, NPR, Drudge Report, CNN, Fox, and ABC News. Ben currently resides in Cincinnati, Ohio. Follow Ben on Instagram. Visit Ben Souza on Linkedin. You may email Ben at [email protected]
Cruise NewsNorwegian's Giant New Cruise Ship Floats Out of Dry Dock
Previous article
16 Things Only People Obsessed With Cruises Will Understand
Next article
Carnival Cruise Line Rolling Out Faster Internet To Every Cruise Ship in Their Fleet