Majesty of the Seas Cruise Ship and 7 Things I Loved 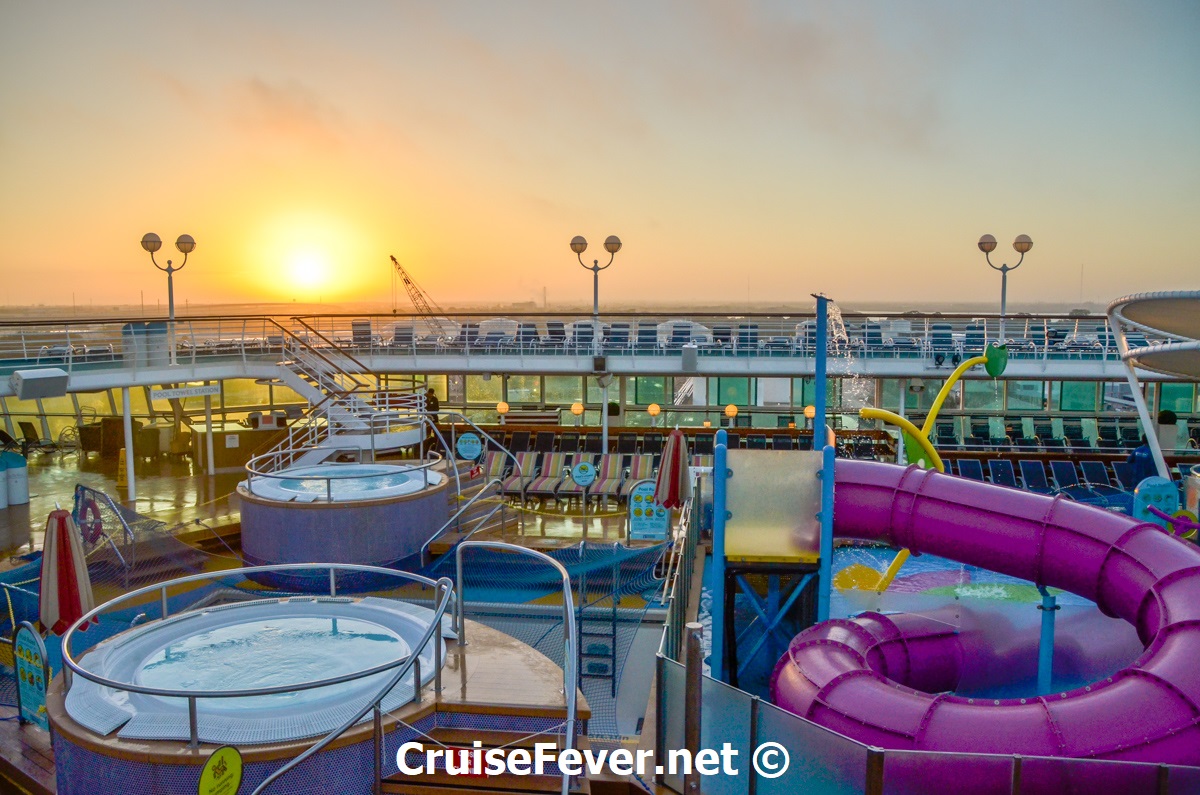 Royal Caribbean International’s Majesty of the Seas is one of the oldest cruise ship’s in the cruise line’s fleet, but after spending 4 days on board this vessel, I can say it felt more timeless than aged.

If you’d rather just see what this ship is like, you can check out the video tour below as we went through Majesty of the Seas deck by deck.  The stateroom tour is near the end of the video.

The ship recently went through a dry dock in which it received some maintenance and general upgrades, but in 2007 Majesty of the Seas underwent a multi-million dollar refurbishment that included the addition of a Johnny Rockets, The Compass Deli, Boleros, and some cabin upgrades.

I knew this Sovereign class ship would not have the new amenities that Oasis and Quantum class ships offer from Royal Caribbean, but for a quick getaway on a relaxing cruise, this ship quickly became more like a floating home than hotel.

The main reason I chose this cruise was so I could visit Cuba.  This was only the 3rd time that Majesty of the Seas had been to Cuba and I wanted to see what a cruise to Havana was all about.  I will be writing an article on my experience in Cuba as well, but for now, I wanted to focus on why I really enjoyed this ship.

Here are 7 things I loved about Majesty of the Seas, and who knows, you might identify with some of these things as well.  We’d love to hear your comments if you have been on this ship before or plan on it in the future.

No one likes standing in line or fighting through a crowd of people.   With a little over 2,000 passengers, Majesty of the Seas had a very easy embarkation and disembarkation process.  And since the ship is still a decent size for this number of cruise guests, it never felt crowded at the buffet or even on the pool deck.  Of course, it was a bit busy during the belly flop competition on the last sea day, but that’s to be expected.  The only real line I experienced was in Key West when trying to get back on the ship.

Plenty of Places to Lounge 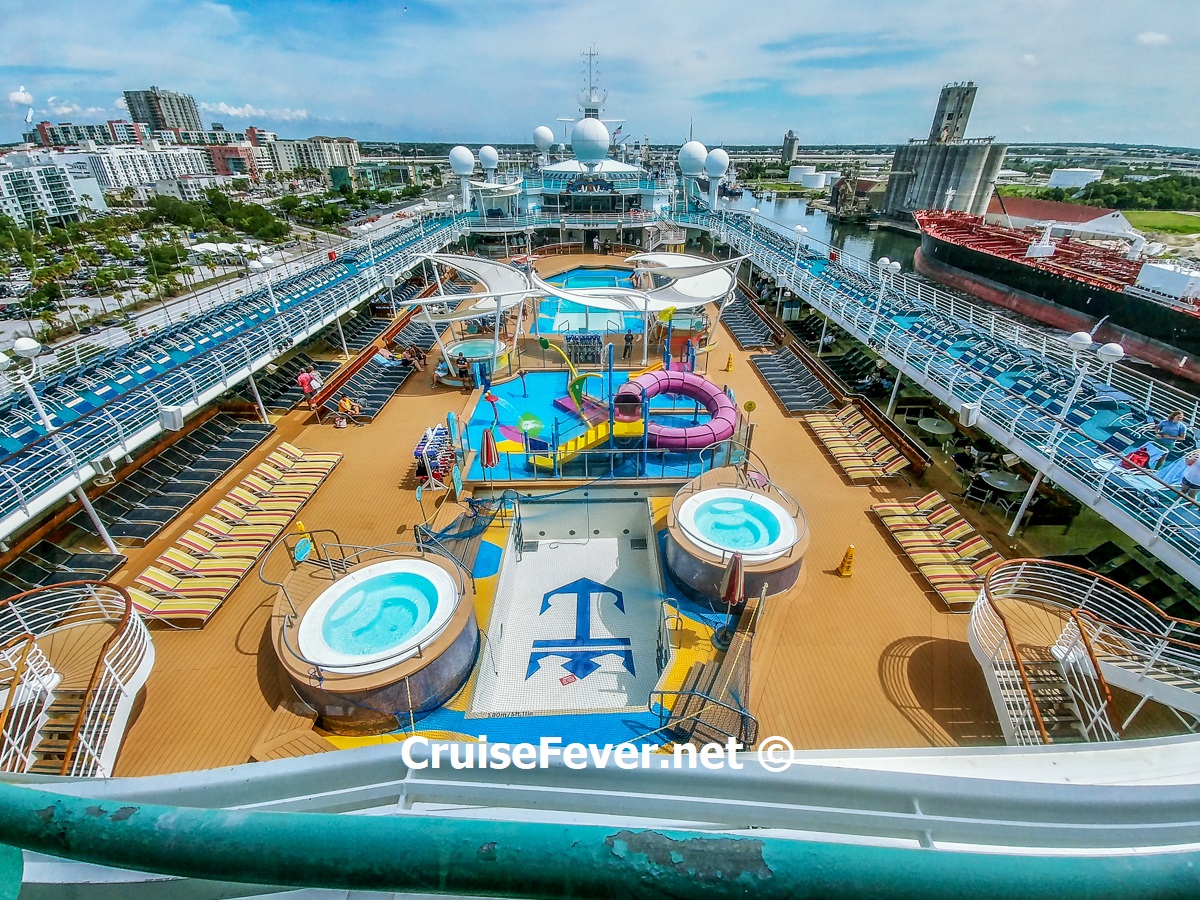 Some cruise just to relax and get away from it all for a while.  There is nothing like finding an empty lounger in the sun, listening to the sounds of the ocean as you shut your eyes and soak in the moment.  On this ship there was an abundance of loungers.  Most were in direct sunlight, but some shade could be found on the lower pool deck as well.  Even though lounge-chair-saving is always an issue, with this many lounge chairs it was not hard to find a place to take a quick cruise nap.  I don’t know about you, but I always sleep better at sea.

Do yourself a favor and try out the crepes on Majesty of the Seas at The Compass Deli.   Check the hours as the deli is only open during certain times of day, but the crepes station is fantastic!  Offering both sweet and savory crepes, I found myself often in this area of the ship.  I only took the stairs during the entire cruise, so I felt like I had earned that right.

I’m not a huge shopper when I go on a cruise, but I do browse a bit and find it interesting to see what kinds of deals can be found on a floating vacation.  The Centrum shops on Majesty of the Seas are just in a perfect spot and laid out really nicely.  Latitudes, a coffee shop, is located in this area as well, so you can sip some brew while checking out some Royal Caribbean t-shirts or picking up that sun block you forgot to pack.

There are also a few “sidewalk-sale” type events that go on in this area through the week.  It’s right off the atrium and near the guest relations desk, so again, it’s just a perfect spot if you feel like walking around. 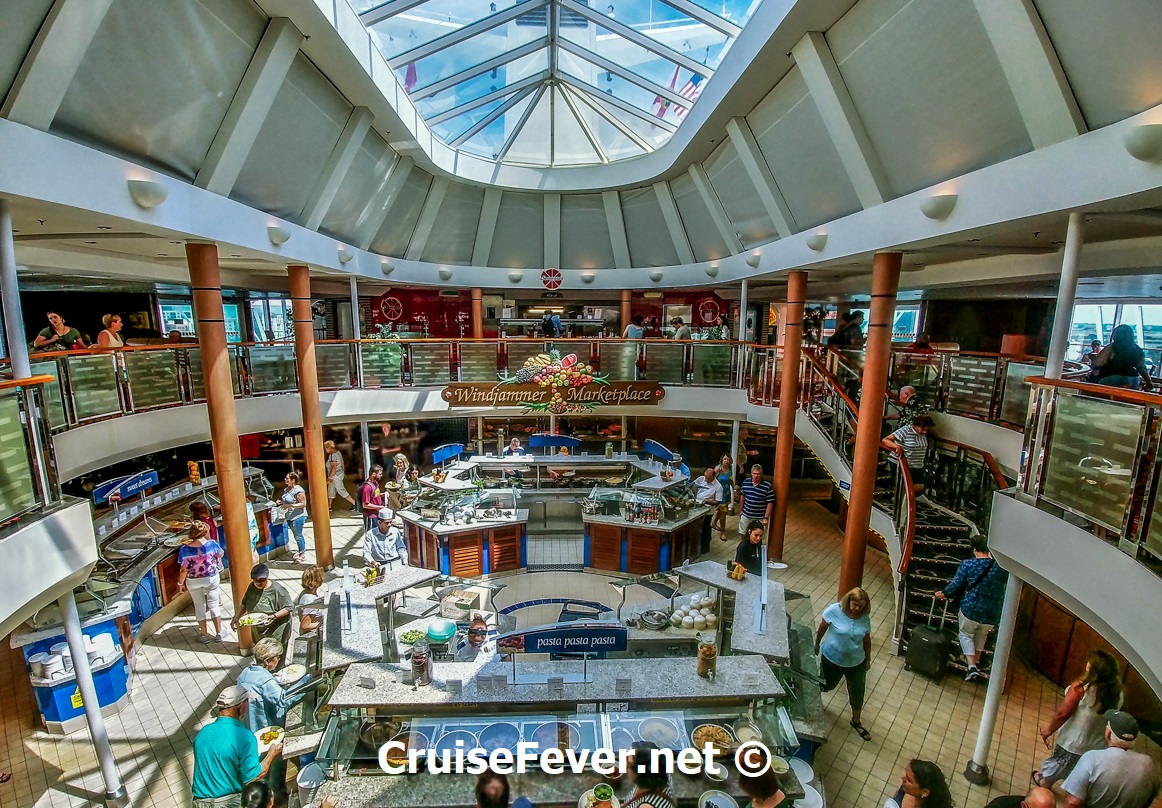 There are really two sections of the buffet on Majesty of the Seas, and there are also two decks in this area.  I really enjoyed how spacious Windjammer Café felt.  The aft section of the buffet was almost always less crowded and more peaceful as it looked out over the ocean, but there was also an upstairs section that offered a drink station and lots of natural light from above the center of the buffet.

It was a relaxing area to eat my lunch and not feel like a crammed sardine.  Of course this meant I had to descend the stairs to get more food from the buffet, but Sorrento’s and Compass Deli were on that same floor as well.

This is a staple of some Royal Caribbean ships, and I must say that is probably my favorite place to sit and watch the ship as it leaves and enters a port.  Often this section is reserved for Diamond and Pinnacle Club members, but it’s the highest point from which you can view the ship and look around.  There’s also a ship’s wheel up there that’s great for photo ops.  The picture under the point “Plenty of Places to Lounge” was taken from Viking Crown Lounge. 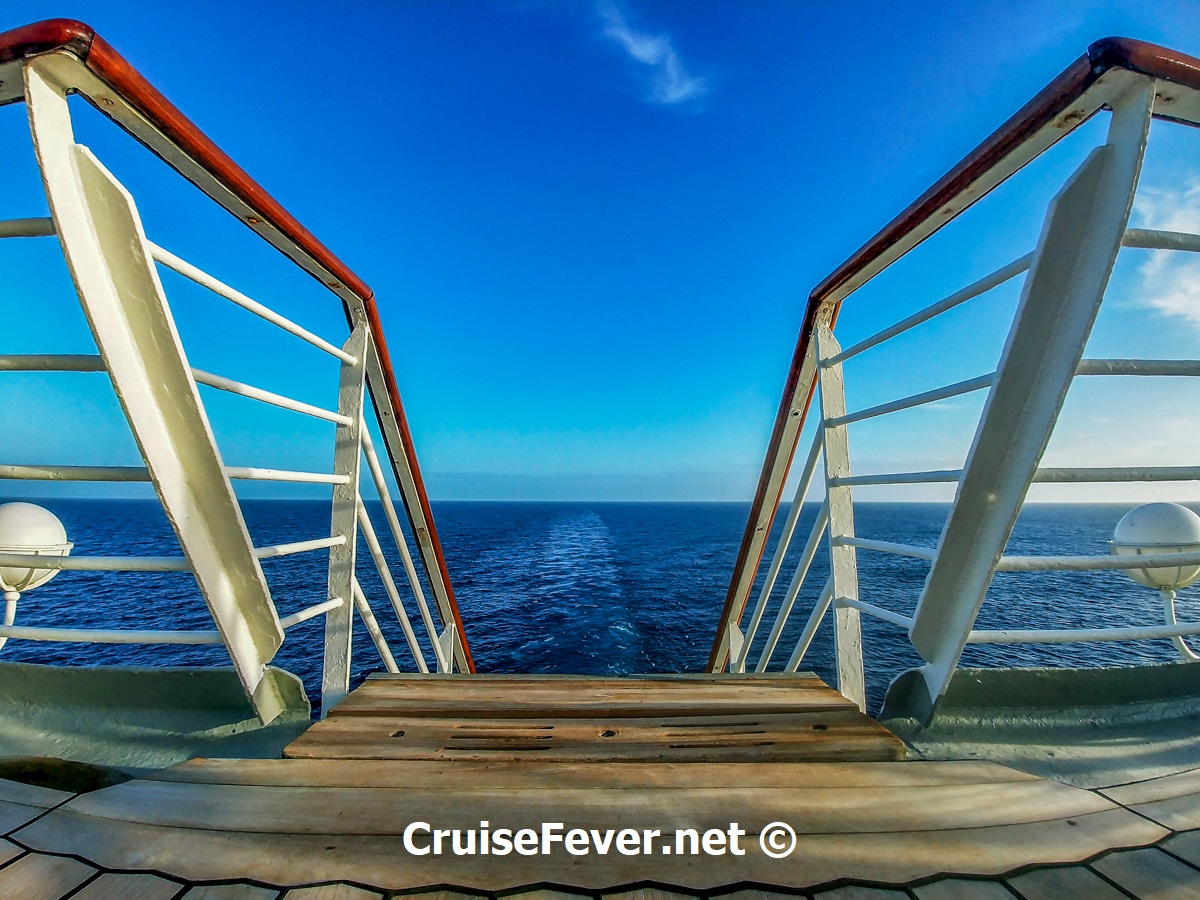 Majesty of the Seas does not have an aft pool, but it does have a very inviting deck-by-deck area for views and lounging.  Just behind the spacious basketball court is a staircase.   Walk down one deck and you will find a few loungers for enjoying the view.  You can keep descending stairs until you get to deck 7, which goes all the way around the ship.

I just love this ease of navigation, which also allows for many spots to watch the ship come in and out of port.  From deck 11 to deck 7, each deck has a few loungers.  It might require a bit of exercise, but it’s well worth it in my opinion.

J. Souza
Jon got hooked on cruising after his first cruise on his honeymoon, and today he is always looking for cruise deals and reading information about the cruise industry. Jon lives in the foothills of North Carolina and wishes there were a cruise port that far inland. Jon can be reached at [email protected]
ShipsRoyal CaribbeanMajesty of the Seas Cruise Ship and 7 Things I Loved
Previous article
Carnival Cruise Ship Receiving New Duty Free Store
Next article
9 Cruise Lines Offering Memorial Day Cruise Deals: Free Drinks, Reduced Deposits, OBC