I am currently on seven night cruise to the Greek Isles on Norwegian Star. This has been a bucket list itinerary for me for quite some time and I’ve been looking forward to the cruise since I booked it last December. 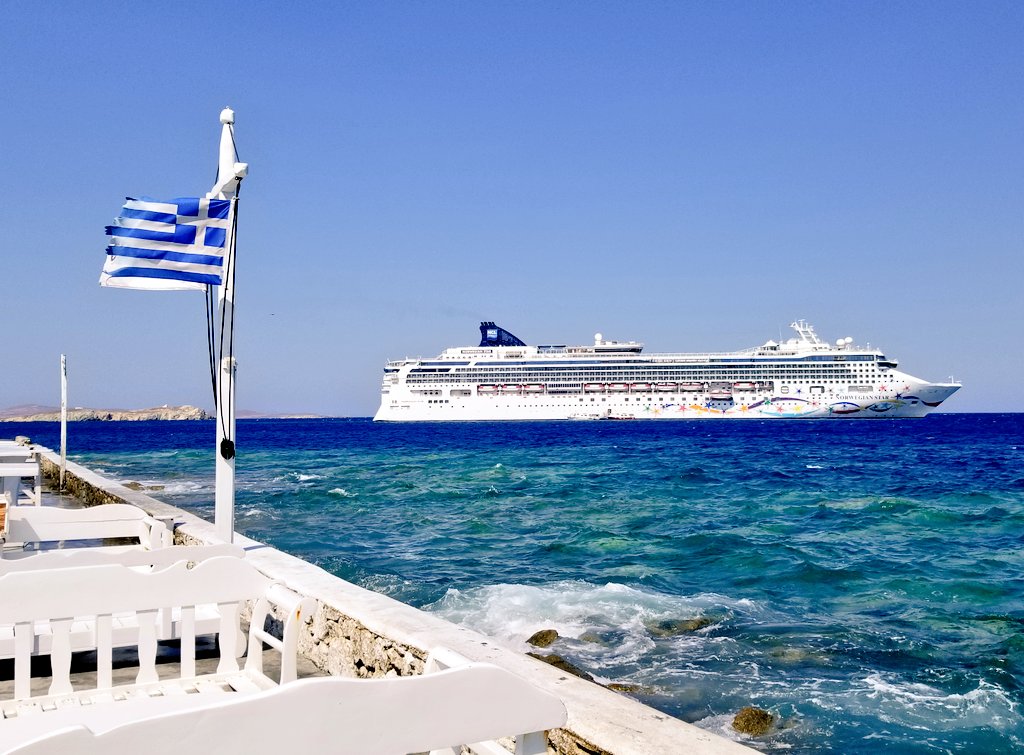 Although this is my first sailing with Norwegian Cruise Line in three years, I’ve always had a special place in my heart for Norwegian since my first three cruises that I ever took was on the cruise line. This is a seven night roundtrip cruise out of Venice, Italy on Norwegian Star.

After being on board Norwegian Star for several days, here are my first impressions of the cruise ship.

I booked a guarantee balcony stateroom. I love having a balcony and I saved over $500 by letting Norwegian choose my exact cabin. For those who have been readers of Cruise Fever for awhile probably know that this is the type of cabin I book 90% of the time.

I ended up with cabin 9076, it’s located midship three decks down from the pool deck and two decks above the atrium. The location is perfect.

One thing I love about the cabin is the abundance of USB outlets. There are two by the desk and one on each side of the bed. They are located in the perfect spots. The bathroom has an interesting layout that I haven’t seen before. The sink is in the middle with the toilet and shower on the sides. There are doors (semi-transparent) for both the toilet and shower. I really love the layout and wish more cruise ships had bathrooms like this.

Besides that, it’s pretty much your standard cruise balcony stateroom.

You can check out this video tour of my cabin:

Because of the layout, there are some “hidden” spots on the ship that are hardly ever busy. In the front of the ship, there is a hot tub and plenty of loungers that are always empty. It’s a great quiet area to get some sun.

One thing about Norwegian Star is that you won’t go hungry. If you do it is totally your fault. There are so many dining options onboard. Off the top of my head, I counted over a dozen different options for dinner.

At just over 90,000 gross tons, the ship isn’t too big and not too small. You can quickly get from one end to the other and is a nice change of pace from the newer mega ships.

One of the best parts of the cruise so far is the itinerary. On this seven night cruise, we have six ports and no sea days. Since I love visiting new places, it’s the perfect itinerary for me.

The cruise features one stop in Kotor, Montenegro, four ports in Greece, and then ends with a port visit to Dubrovnik, Croatia. The old city in Kotor is one of my favorite places around the world to visit. I fell in love with it the first time I visited and enjoyed it just as much on this cruise.

Yesterday we visited Santorini and it lived up to the expectations. A visit to Santorini needs to be on every cruiser’s bucket list. From the famous blue domed churches to Black Sand Beach, it quickly became our favorite port. The day ended with the most beautiful sunset as we dined at a local restaurant overlooking the water. Tip: wait in line for the cable car and don’t ride the donkeys up the mountain. We took the cable car up and walked back down.

I wasn’t sure to expect from Mykonos today but the Old Port is just incredible to walk around. I have visited 40 countries and have never been to a town like that. It’s the perfect place to just walk and “get lost”, visit the shops, and enjoy some Greek Coffee.

One of the things that has impressed me the most about this cruise are the crew members. From our stateroom attendant to all the workers around the ship, they have been equal or better to the staff that you would find on more premium cruise lines.

My wife has an allergy to gluten so traveling around the world can be challenging at times. I can’t say enough good things about how they have handled her food allergy. I want to give a special shout-out to Jasmin. When she saw us walk into the Garden Cafe (buffet) for lunch, she came over to us, said hello, and then asked my wife if she would like some gluten free bread. She came back a few minutes later with a few slices. My wife has been on dozens of cruises and we have never had that happen before.

At several ports we arrived early including over an hour early in Santorini. This gave us more time in port and made everyone happy.

Three of the ports required tenders. While the first tendering spot was not ideal and require a rather long tender ride to the port, we had the best locations for the second two ports. The tender ride today was no more than 2-3 minutes each way.

When I booked this cruise, I received the Free at Sea offer. I chose the dining package, WiFi, and Ultimate Beverage Package. The steakhouse Cagney’s is nothing short of amazing. The WiFi on board has been OK, I’ve had better and I definitely have had worse on cruise ships. The Ultimate Beverage Package is nice but it does not include bottle water, Red Bull, specialty coffees, or Gatorade. Just something to be aware of.

If you are cruising out of Venice, come at least a day or two early and stay a day or two after your cruise. You don’t want to fly all the way to Venice and not see this magnificent city.

Overall, it’s been a great cruise so far on Norwegian Star. I will have a complete review of the ship after I get back from my cruise.

Ben Souza
Ben is a world traveler who has visited 42 countries and taken over 50 cruises. His writings have appeared and been cited in various media outlets such as Yahoo News, MSN, NPR, Drudge Report, CNN, Fox, and ABC News. Ben currently resides in Cincinnati, Ohio. Follow Ben on Instagram. Visit Ben Souza on Linkedin. You may email Ben at [email protected]
OpinionFirst Impressions of a Norwegian Cruise Line Cruise to the Greek Isles
Previous article
Royal Caribbean Adds Cruises with Two Days at Their Private Island
Next article
24 Things to Do in Falmouth, Jamaica on a Cruise