Azamara Club Cruises celebrated a rare occurrence this week when two of their cruise ships, including their newest vessel Azamara Pursuit,  met in Haugesund, Norway. 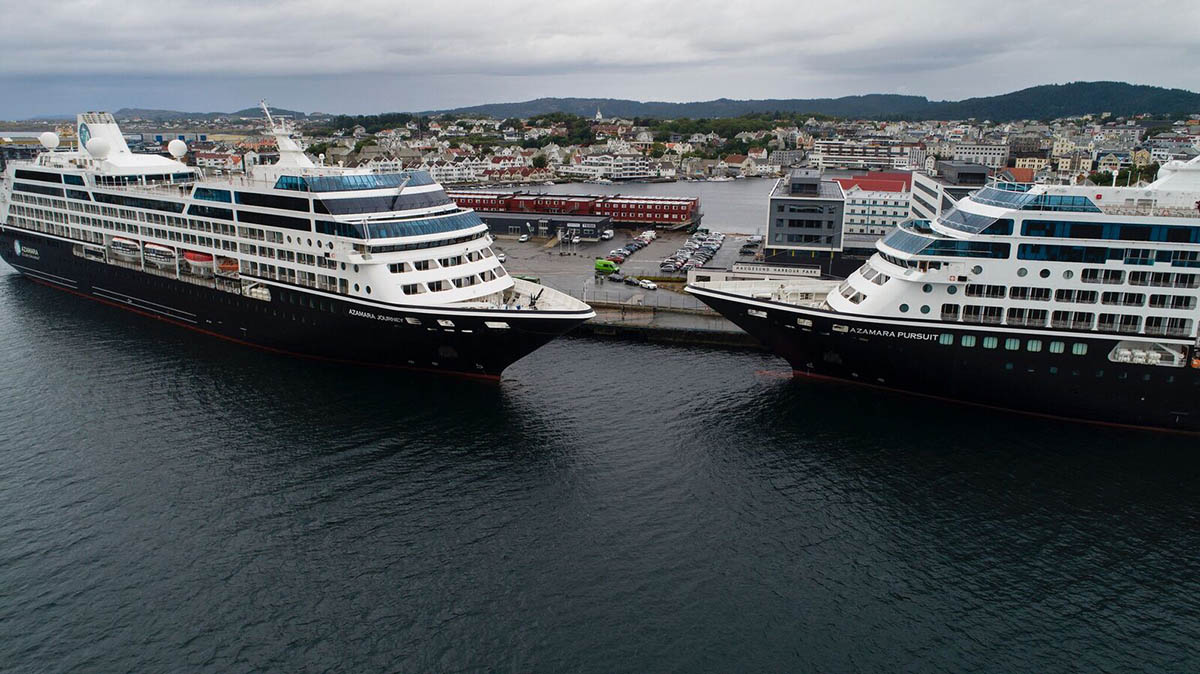 The meeting was celebrated with a variety of activities including an on-shore gathering, which brought the guests and crew from each ship together, as well as a sail away party featuring Norwegian cuisine, cocktails and entertainment.

Exploring Azamara Pursuit and Azamara Journey
Guests and crew had the opportunity to tour each cruise ship upon arrival in port. They were guided through the various spaces of the ship including the restaurants, pool deck, fitness center, and more.

Exploring the Destination
As part of its land programing, enabling guests to explore deeper into Haugsesund, Azamara offered guests from both ships an exclusive tour of Kyvik Herring Factory, led by the executive chefs onboard Azamara Pursuit and Azamara Journey. During the tour, travelers met the local producers who are committed to keeping Norway’s vibrant Herring fishing tradition alive and learned the process of salting, seasoning, and preserving the fish for use in classic cuisine.

On-Shore Party
To give guests the opportunity to celebrate with crew from both ships, Azamara and the port of Haugesund hosted a party on the pier upon arrival and as guests were returning from their day exploring. The event featured a display of authentic Norwegian customs with a flag parade led by local children dressed in Bunad, traditional Norwegian folk costumes that are worn for special events. The event also included the opportunity for guests to join the plaque ceremony between both captains, the Haugesund Mayor and the port officials.

Sail Away Party
The celebration continued on-board the vessels with a party showcasing Azamara’s commitment to Destination Immersionâ. As the ships departed from port, both blew their horns in unison as guests and crew waved goodbye. They also toasted the sister ships meeting with a cocktail mixed with Linie Akvavit – a signature liquor of Norway – all to the sounds of “We Are Family.” The evening concluded with Azamara’s white night-inspired sail away party with a special Scandinavian twist.

About the Destination and Voyages
The port town of Haugesund is considered one of the country’s principal cultural centers and known as the birthplace of Norway. The lands around Haugesund were lands of power during the Viking Age, and the first king of Norway lived very near by the present city center. Azamara Journey is sailing the 15-Night Journey to North Cape and Azamara Pursuit is sailing the 12-Night Norway Intensive Voyage with eight stops in Scandinavian country.