Peace Boat, which currently operates Carnival Cruise Line’s former cruise ship Tropicale, has plans to build an Ecoship ship powered by wind and solar. The ship is being developed by a team of over 30 engineers, scientists and thinkers from the fields of ship-building and cutting edge technology. 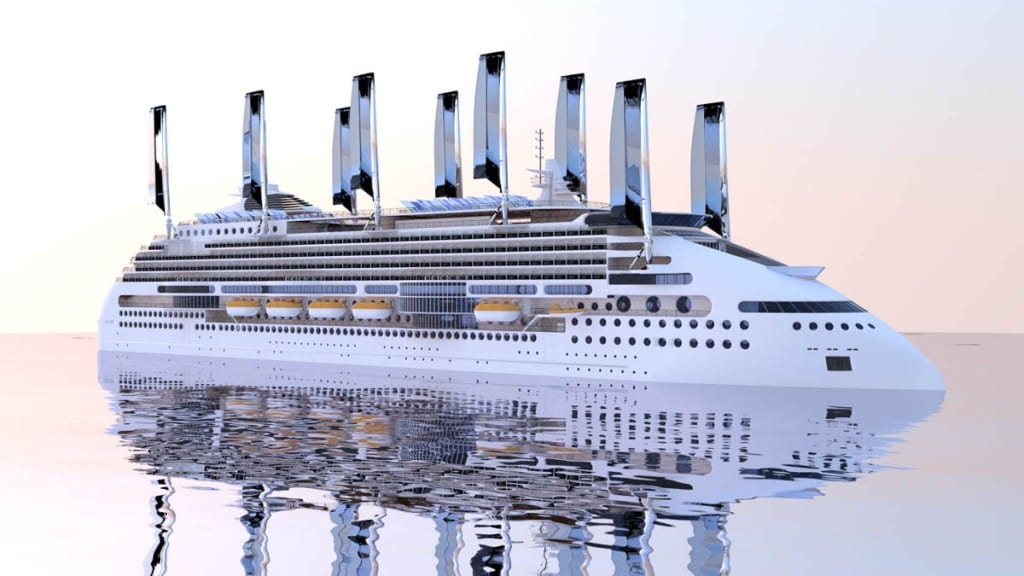 This 55,000 gross ton Ecoship will be unveiled at COP21 later this week in Paris. The vessel will be the greenest cruise ship ever built and will be powered by solar and hybrid wind. The ship will have 10 retractable solar paneled sails and retractable wind generators, along with a future ready hybrid engine.

The Ecoship is scheduled to set sail in 2020 and will have a hull inspired by the whale.  Peace Boat’s Ecoship will be the flagship for green technology in passenger shipping.

The maiden voyage will be announced later this week in Paris and is expected to carry up to 5,000 people per year on educational voyages. Peace Boat is a Japan based international non-governmental and non-profit organization that works to promote peace, human rights, equal and sustainable development and respect for the environment.  The chartered passenger ship travels the globe on peace voyages.

“Peace Boat’s 2020 launch of the Ecoship offers a vision for a climate-friendly future and can lead the way towards a green cruising model that can also impact the wider shipping industry. The industry must adapt to the planet’s needs.”

Peace Boat was nominated for the Nobel Peace Prize in 2008 and has carried more than 50,000 passengers on over 80 voyages visiting more than 180 ports.

Ben Souza
Ben is a world traveler who has visited 42 countries and taken over 50 cruises. His writings have appeared and been cited in various media outlets such as Yahoo News, MSN, NPR, Drudge Report, CNN, Fox, and ABC News. Ben currently resides in Cincinnati, Ohio. Follow Ben on Instagram. Visit Ben Souza on Linkedin. You may email Ben at [email protected]
Cruise News Cruise Ship Powered By Wind and Solar To Set Sail in 2020
Previous articlePrincess Offering Full Refund to Passengers on Grand Princess
Next articleCruise Line Adds Second Ship to Cuba to Meet High Demand