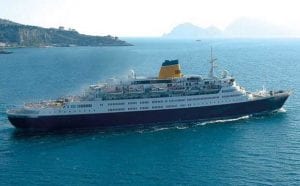 Saga Cruises has reported that their cruise ship, the Saga Ruby, has developed engine trouble canceling the current cruise.   According to the captain’s blog, the ship began having technical difficulties that will require several days to make repairs.

The remainder of the current cruise has been canceled so repairs can be made to the ship.  A team from the head office had flown to the ship to oversee the safe return of the passengers on board.  All passengers on the ship will receive a full refund of their cruise fare, as well as a sincere apology from the cruise line.

On Sunday afternoon, Saga reported that all passengers were off the ship by Saturday.  Most passengers choose to fly home, while a few decided to travel back to the UK and will be arriving on Monday.

The next scheduled cruise for the Saga Ruby is an 8 day Advent cruise and is scheduled to depart on time out of Southhampton on December 6, 2012.  The cruise has stops in the ports of  Hamburg, Copenhagen, Gothenburg, and Kristiansund.

The Ruby is scheduled to be retired in January 2014.  A $4 million overhaul has been planned in Bremerhaven, Germany to keep the ship operational until her retirement.

This is not the first trouble that Saga Cruises has had this year.  In April, the maiden voyage of the Saga Sapphire was cut short when the ship began having problems in one of the two engines on the ship.

The Saga Ruby is a 655 passenger cruise ship that has been in service since 1973 when she sailed for Norwegian America Line.  The ship was sold to Cunard Line in 1983 and acquired by Saga Cruises in 2004.

Cruise Fever will continue to monitor the Saga Ruby and have any additional information on the cruise ship as it comes in.