Disney Cruise Line has announced they are bringing the blockbuster animated hit, Frozen, aboard one of the their cruise ships this fall.  The cruise line said that guests will see “Frozen like they have never seen it before”. 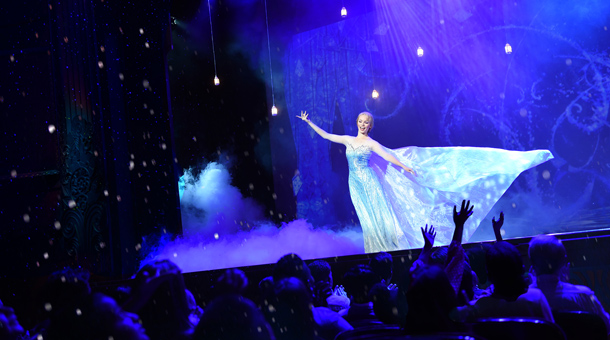 “Frozen, A Musical Spectacular”, will debut on Disney Wonder on November 10, 2016 when the ship departs from Galveston, Texas for a four night cruise to the Western Caribbean. This Disney Cruise Line theatrical treatment will tell the story of sisters Anna and Elsa that is sure to delight guests of all ages.

Disney Cruise Line said that the production will be “presented like never before, with an innovative combination of traditional theatrical techniques, modern technology and classic Disney whimsy, completely unique to the Disney Wonder production”. The show will feature special effects, dynamic costumes, and spectacular production numbers.

“Frozen, a Musical Spectacular” will feature music direction by Marco Paguia, projection design by Aaron Rhyne and lighting design by Rui Rita. Dynamic puppetry by Michael Curry, whose designs are featured in Disney’s Tony Award-winning Broadway musical “The Lion King,” will bring exciting physicality to characters like Sven and Olaf.

Disney said that they will be rolling out more details about this new production show over the next few months.  The video below gives a sneak peak at the making of “Frozen, A Musical Spectacular”.