The honored maritime tradition of taking delivery of a new vessel took place virtually and the new cruise ship will debut in Israel before moving to Ft. Lauderdale, Florida in November.

Odyssey of the Seas is Royal Caribbean’s second Quantum Ultra class cruise ship and is 169,000 gross tons in size.  The cruise ship has all of the features of Quantum class ships as well as new experiences.  They include:

Caribbean-inspired pool deck: Sporting a whole new look across two decks, Odyssey of the Seas’ two open-air pools, four whirlpools and Splashaway Bay, anchored by a Quantum Ultra Class first – The Lime & Coconut bar – are designed for all travelers to enjoy the sun and stars in style.

SeaPlex: The next-generation of a longtime Quantum Class favorite, this SeaPlex is the largest indoor and outdoor activity center at sea, and debuts this venue’s first Playmakers Sports Bar & Arcade.

Giovanni’s Italian Kitchen & Wine Bar and Teppanyaki: Two Royal Caribbean restaurants new to North America join the varied lineup of dining options on board the vessel. The fresh take on Royal Caribbean’s signature trattoria is the first to introduce its new wine bar concept while the other serves up East Asian flavors in the traditional Japanese style for which its named. 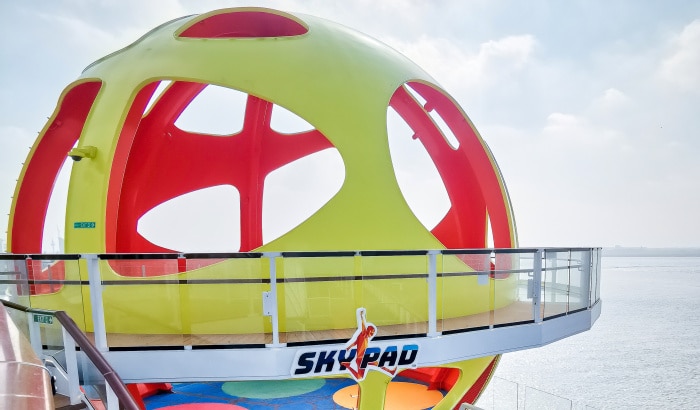 Odyssey of the Seas will welcome her first guests to cruise from Israel on sailings where travelers above the age of 18 and crew members are fully vaccinated. Israeli residents can embark on three to seven night getaways through October to visit in the Mediterranean, including Rhodes, Santorini, Mykonos and Athens, Greece and Limassol, Cyprus.

Following its inaugural summer season, the cruise ship will embark on a transatlantic crossing for its North American debut this November, where it’s slated to offer six and eight night Caribbean itineraries from Port Everglades to Aruba, Curacao and CocoCay, the cruise line’s private island in The Bahamas.

Ben Souza
Ben is a world traveler who has visited 42 countries and taken over 50 cruises. His writings have appeared and been cited in various media outlets such as Yahoo News, MSN, NPR, Drudge Report, CNN, Fox, and ABC News. Ben currently resides in Cincinnati, Ohio. Follow Ben on Instagram. Visit Ben Souza on Linkedin. You may email Ben at [email protected]
Cruise News Royal Caribbean Royal Caribbean Takes Delivery of the 25th Cruise Ship in Their Fleet
Previous articleRoyal Caribbean Adds Another Homeport for Summer Cruises in 2021
Next articleConstruction on New Cruise Ship You Live In Starts in 2022

Last week, Royal Caribbean announced that they were temporarily pausing cruises on four ships which resulted in a handful of cruises being canceled. The cruise...
Read more
Royal Caribbean

Royal Caribbean has opened their 2023 summer cruises to Europe for bookings. The cruise line will sail nine cruise ships to the region on...
Read more
Royal Caribbean

Last week, Royal Caribbean announced that they were temporarily pausing cruises on four ships which resulted in a handful of cruises being canceled. The cruise...
Read more
Royal Caribbean

Royal Caribbean has opened their 2023 summer cruises to Europe for bookings. The cruise line will sail nine cruise ships to the region on...
Read more
Royal Caribbean

Royal Caribbean has extended their new mask policy on cruise ships that went into effect in the middle of December. Three weeks ago, Royal Caribbean...
Read more

ABOUT US
Two brothers started Cruise Fever in 2011 when they decided they couldn't stop cruising so they might as well write about it. Do you have Cruise Fever too? Follow along on this incredible voyage!
FOLLOW US
© 2011-2021, Cruise Fever ®. All rights reserved
2.8K Shares
Share2.8K
Tweet
Pin
Email
Share