Norwegian Cruise Line has announced that Norwegian Breakaway is headed to New Orleans as part of the cruise line’s 2018/2019 deployment. The cruise ship will offer seven, 10, and 11 day cruises to the Caribbean from New Orleans. 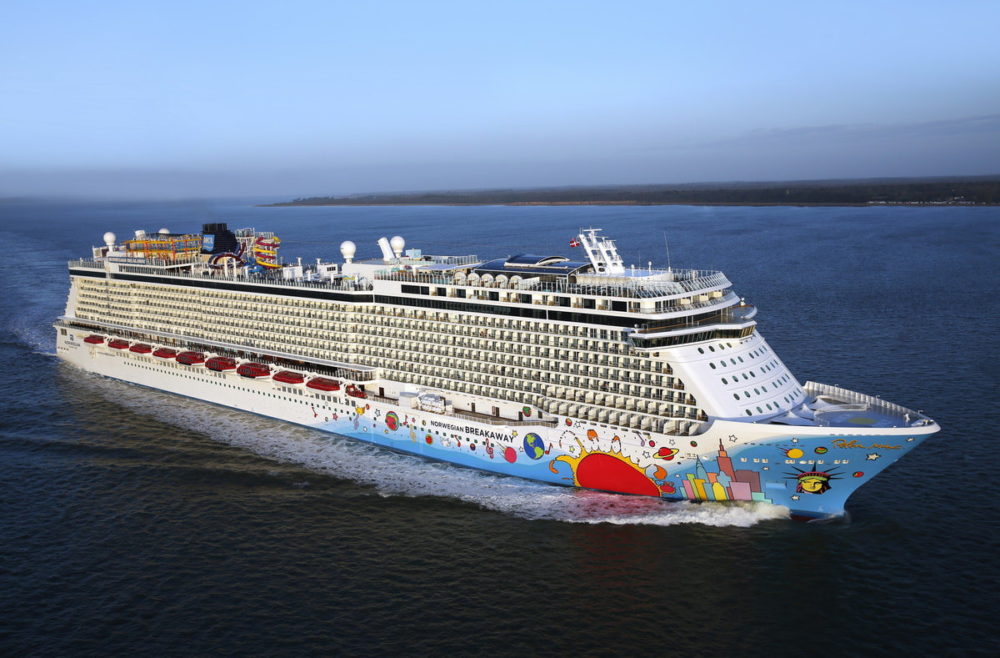 After returning from her summer  2018 season in the Baltic, the 4,000 passenger Norwegian Breakaway will reposition from the Big Apple to the Big Easy for her winter 2018/19 season and cruise to the Caribbean, visiting  ports of call including Cozumel and Costa Maya, Mexico; Ocho Rios, Jamaica; George Town, Grand Cayman; Roatán, Bay Islands, Honduras; and the beautiful island destination of Harvest Caye, Belize.

Harvest Caye offers a diverse, enriching experience highlighting the natural beauty and culture of Belize along with lush native landscaping, a swim up pool bar, luxury beach villas, private pool cabanas, thrilling aerial activities and water sports. The destination also features the first ever pier in Belize that allows guests to walk straight off the ship and into paradise. Norwegian Gem, a fan favorite Jewel-class ship, will now sail from New York City for the winter 2018/19 season.

With the overwhelming positive response to Norwegian Bliss’ deployment to the West Coast next year, Norwegian is providing guests another new departure port to experience Norwegian’s signature cruise vacation. By repositioning the 145,655 gross ton Norwegian Breakaway to New Orleans, Norwegian is offering a more convenient departure port along with a newer and larger ship for cruisers sailing from the Crescent City to explore.

Norwegian Breakaway will delight cruisers of all ages, as she features a wide variety of accommodations, from Studios for the solo cruiser to the exclusive, all-suite luxurious enclave, The Haven by Norwegian; more than 25 different dining venues; an exhilarating aqua park with five slides and a thrilling ropes course with zip lines and The Plank; signature Broadway entertainment including Rock of Ages and so much more. Norwegian Breakaway, which debuted in 2013, was the first ship in the line’s signature Breakaway class, and features The Waterfront, a quarter-mile promenade deck with waterfront dining, shopping and entertainment, along with 678 Ocean Place, a three-story complex at the heart of the ship where guests can enjoy nightlife, gaming and more.

The ship will undergo a two-week dry dock next spring, and will receive a full refresh in public spaces, including new flooring, updated furniture, new décor and new carpeting in staterooms. Norwegian Breakaway will arrive in her new homeport of New Orleans on November 11, 2018 and will sail a variety of cruises to the Caribbean through April 7, 2019.

Andy Stuart, president and CEO of Norwegian Cruise Line, gave the following statement: “Norwegian Breakaway will be the largest and newest ship from Norwegian to sail from New Orleans, and we are thrilled to bring our signature Breakaway-class ship to this important homeport. We want to provide more opportunities for our guests across the country to explore beautiful destinations and enjoy all of the spectacular features of our newest ships, along with the freedom and flexibility that only a Norwegian cruise can offer.”

The recently refurbished Norwegian Gem will remain in New York City and sail a series of cruises to the Caribbean, Canada & New England and the Bahamas & Florida.  She will share her Manhattan homeport with Norwegian Escape, which will reposition for summer 2018 for the first time since she was christened in 2015, sailing from New York City to Bermuda on seven-day cruises every Sunday beginning April 22, 2018. Norwegian Escape features entertainment from the Tony-award winning After Midnight and critically-acclaimed For the Record: The Brat Pack, along with a bevy of food and beverage concepts including the District Brewhouse featuring 25 beers on tap and including a selection of popular craft beers; the upscale food emporium, Food Republic; and The Cellars, a Michael Mondavi Family Wine bar.