Holland America Line has opened bookings for their next cruise ship Nieuw Statendam, the second Pinnacle class ship from the cruise line. 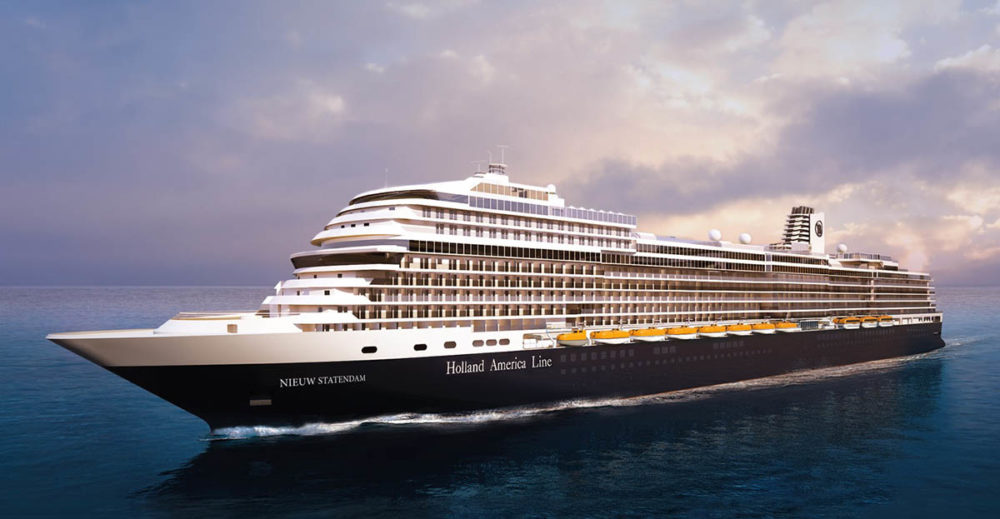 Nieuw Statendam is scheduled to be delivered to the Holland America in Venice on December 1, 2018.  The first voyage will be a 14 day transatlantic sailing from Civitavecchia (Rome), Italy and arrive in Port Everglades for the Caribbean cruise season. The ship will then spend the winter season cruising roundtrip from the South Florida port on seven-day Caribbean itineraries, with select three-, four- and 10-day options.

From December 2018 through April 2019, Nieuw Statendam will spend its inaugural season exploring the golden beaches and sun-kissed skies of the Caribbean on roundtrip Fort Lauderdale cruises. All Caribbean itineraries include a call at Half Moon Cay, the line’s award-winning private Bahamian island known for its pristine landscapes, exciting shore excursions, exclusive beach cabanas and child-friendly activities.

For a quick get-away, a three-day cruise departs roundtrip Fort Lauderdale Jan. 30 and includes a call at Half Moon Cay, Bahamas.

For the remainder of the season, the ship will feature western and eastern Caribbean itineraries: the first calls at Half Moon Cay, Ocho Rios, Grand Cayman and Cozumel, while the second features calls at Grand Turk, San Juan, St. Thomas and Half Moon Cay — with the March 17 departure swapping Amber Cove for Grand Turk.

About Nieuw Statendam
The 99,500-ton ship will reflect the ongoing evolution of the Holland America Line experience. While much of the ship’s design will be similar to ms Koningsdam, the first Pinnacle Class ship, Nieuw Statendam will carry 2,666 guests and have exclusive public spaces and its own style created by leading hospitality designer Adam D. Tihany and designer and architect Bjorn Storbraaten.