As Disney Cruise Line nears the big reveal for features that will be on their next new cruise ship Disney Wish, the cruise line has introduce a brand-new, distinctly Disney design concept unlike anything at sea 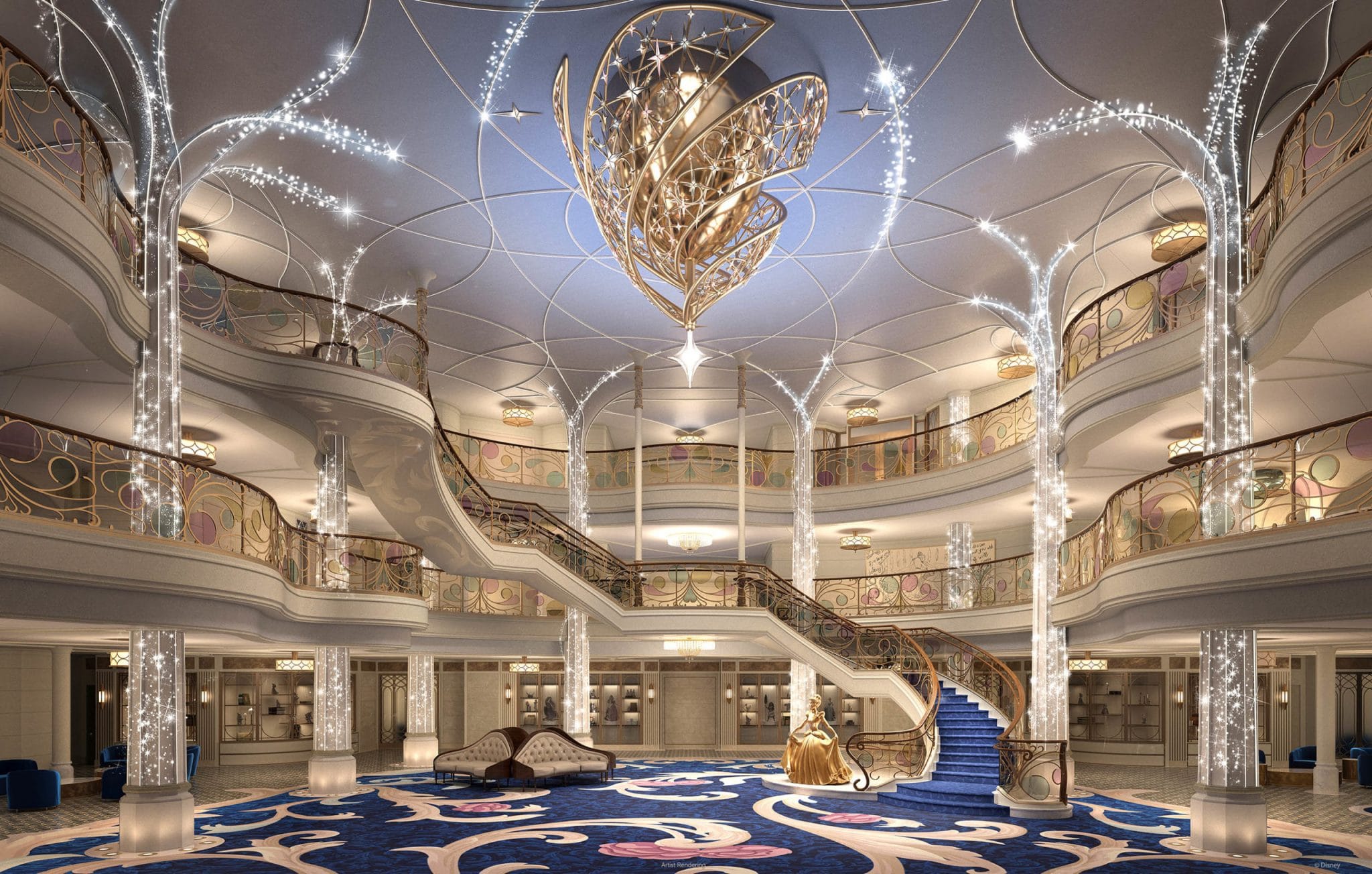 The motif of enchantment — found at the heart of so many beloved Disney stories — is the architectural and thematic foundation of the cruise ship’s design, weaving imagination, emotion and adventure into the very fabric of the vessel’s unique personality.

Inspired by nearly a century of Disney fairytales, Walt Disney Imagineers have captured the essence of enchantment through three design lenses, using:

How the motif will be expressed throughout the design is as much a reflection of the ship’s distinctive personality as of the wide range of stories that will be represented on board, from Disney and Pixar to Marvel and Star Wars.

Disney Wish will continue the Disney Cruise Line tradition of incorporating an elegant, classical exterior design — a tribute to the golden age of cruising — in the emblematic colors of Mickey Mouse.

A hallmark of Disney Cruise Line is the adornment of two character art pieces on the hull of each ship. For the Disney Wish, elegant filigree artwork on the bow — an intricate scrollwork pattern reminiscent of the classic ocean liners of the 1930s — will feature Captain Minnie Mouse for the first time, solidifying her pioneering place at the forefront of the fleet’s future.

The stern of the Disney Wish will boast a custom sculpture of the optimistic and adventurous Rapunzel. Suspended by her golden tresses, this artistic Disney Princess will appear to be “decorating” the exterior of the ship with her trusty paintbrush and the help of her chameleon pal, Pascal.

To take it one step further into enchantment, Imagineers have added a whimsical curvature to the deck edge along both sides of the Disney Wish, which will create a sense of magic and visual movement both inside and out.

A Castle on the Seas

The spellbinding Grand Hall — a bright, airy and elegant space that will welcome guests as they first step on board — is the truest embodiment of the enchantment motif. The heart and hearth of the Disney Wish, this fairytale castle-inspired atrium is touched with Gothic, Baroque and French Rococo influences that will give life to the columns, carvings, trimmings and adornments.

The Grand Hall will be Disney Cruise Line’s castle on the seas, an enchanted realm where glittering trails of pixie dust climb majestic three-story columns, spill across the ceiling and animate the shimmering chandelier above with an effusive burst of magic. The chandelier is the manifestation of wishes come true – a swirling spiral of crystal gems punctuated with light, its crown jewel a wondrous wishing star.

At the base of a grand staircase, beneath the glow of the wishing star, will stand the personification of wish fulfillment herself: Cinderella. A pillar of The Walt Disney Company’s legacy, Cinderella’s story is the epitome of magic transforming wishes into dreams and dreams into reality.

The beautiful bronze statue of this beloved princess is just one of many tributes to her story in the Grand Hall’s design – others include railings that glisten with elegant stained glass in her signature colors, rich carpeting embellished with icons from the film, and sophisticated nods to her carriage and glass slipper in the delicate metalwork and light fixtures.

The Grand Hall will be the enchanted gateway to everything that awaits on board the Disney Wish: fairytale worlds, heroic challenges, epicurean indulgences, thrilling adventures, galactic encounters, peaceful escapes and so much more.

Disney Wish is the first of three new cruise ships from Disney Cruise Line and is scheduled to enter service in 2022.